The number of submissions for April 2015's Tattooed Poets Project was unprecedented. As a result, I was unable to post everyone's work. Last year, we had an extended celebration of tattooed poets in May and June with a "Tattooed Poet of the Week." We're resurrecting this practice this year, for as long as we have submissions to share.

Our first 2015 Tattooed Poet of the Week is Jendi Reiter: 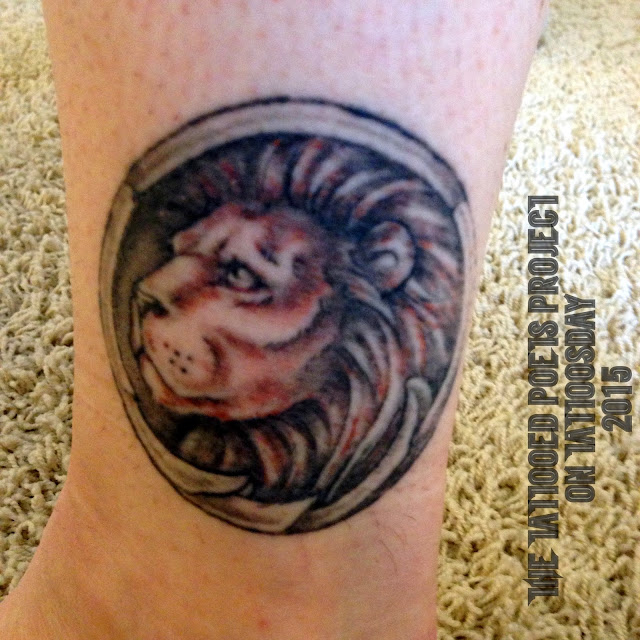 
"The lion represents Aslan, the Christ-figure in C.S. Lewis's Narnia books, as well as the courage of my masculine spiritual side. The original artwork is by Nycci Traynor at InkWell Studio in Bristol, CT. It is based on the first logo of WinningWriters.com, the online resource for creative writers that my husband and I have operated since 2001.

I chose Nycci to apply my first tattoo because she did a beautiful job on my mom-of-choice Roberta's tattoo, a colorful tree frog on her bicep. The frog is Roberta's totem animal as the lion is mine.

I've always admired tattoos as an art form. For me, it also meant taking back ownership of my body, and manifesting my personal journey out of shame and secrecy, into truth and power.

As the appointment approached, I did have some misgivings about the permanent commitment that a tattoo represented, since I've reinvented myself and changed my beliefs a few times. That was the inspiration for [the following] poem, 'Trigger Warning for Sailors.' It's included in my recently published collection, Bullies in Love (Little Red Tree Publishing, 2015)":


Beckoned, drunk, by a mermaid's
permanent stain, I shrank
from the needle's blue.
I might have to change
my face someday,
turn my voyage inside-out,
a thief reversing his coat in the crowd.

A rare risk, I know.
More likely I'll slip
under the unmarked green ocean
stitched in a linen sack.
No bunkmate to joke
that I wore my bones on my sleeve.

They all look the same, at sea,
skulls winking on sail-hoisting shoulders,
blue roses creeping up bowed legs,
an easy girl on every arm
copied from flash.

What else remains — Names?
Anchors? The portside artist,
her needle restless as a watch's
second hand, pushed the Mom heart:
Every man had a mother.
But a trash bin was my cradle,
and I'm not alone
among those who take to the sea.

I've shared my hammock with men
of greater faith, who carved the blue memory
of hometown loves on their backs.
Through storms, we've swung in a dark
so complete I couldn't read
the log of their shipwrecks.

Our wake draws a line
of minutes to the dock.
I'll drink the night with friends,
wake up talked into angels
penned for life on my chest.
Remember, body,
the water undoes us at last.

Jendi Reiter is the author of the poetry collections Bullies in Love (Little Red Tree Publishing, 2015), Barbie at 50 (Cervena Barva Press, 2010), Swallow (Amsterdam Press, 2009), and A Talent for Sadness (Turning Point Books, 2003). Awards include a 2010 Massachusetts Cultural Council Artists' Grant for Poetry, the 2013 Little Red Tree International Poetry Prize, the 2012 Betsy Colquitt Award for Poetry from Descant magazine, the 2011 James Knudsen Editor's Prize in Fiction from Bayou Magazine, the 2011 OSA Enizagam Award for Fiction, the 2010 Anderbo Poetry Prize, and second prize in the 2010 Iowa Review Awards for Fiction. She is the editor of WinningWriters.com, an online resource site for creative writers. Visit her blog at www.jendireiter.com and follow her on Twitter @JendiReiter.

Thanks to Jendi for being our Tattooed Poet of the Week, here on Tattoosday, as part of the Tattooed Poets Project!

Powerful poem, Jendi. You took me into another world I could believe in and feel. Kudos!