Today we have another tattooed poet, Sara Henning, in our ongoing Tattooed Poet of the Week series. Sometimes tattoos are not always colorful and elaborate, yet they still still are full of powerful meaning and symbolism. This is Sara's tattoo: 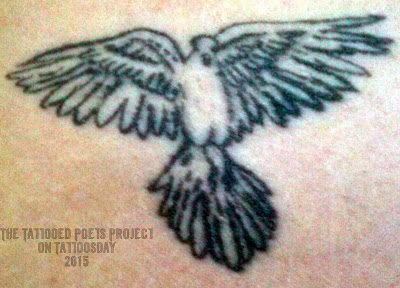 
"I got this tattoo when I was 24 and on a visit home (to Athens, Georgia) while I was pursuing an M.F.A. in Poetry at George Mason University. I had wanted to get the tattoo for a long time, because the tattoo, a recreation of a dove in flight hovering around my kidney area, functioned as an effigy for the life I wish I could have been living. I was in a relationship at the time that had turned physically violent, and my partner had been arrested and banned from our apartment for acts of physical violence against me. I recall often going to school to work in the Writing Center or attending classes covered in bruises from where he would take out his aggression on me. I felt trapped, and I wanted this dove on my body because it depicts the animal's belly, breast, underside of its wing: all of the places most vulnerable and violable. Nonetheless, the creature is able to wing its way out of crisis. I felt that the dove represented to me the dichotomy of the abused woman: vulnerable but capable of flight. Whether she would fly or not was up to her. I'm proud to say I flew."

Sara sent us the following poem, which was previously published in Conte:


AUBADE WITH YOUR HANDS AROUND MY NECK

“Even though I have been out of psychiatric hospital for two years, I am still a missing person for the public who have heard of me. I am neither alive nor dead and, though I have not been buried, I am ‘bodiless.’”
--Louis Althusser, The Future Lasts Forever

My neck like
a shattered mare’s.
But not before
you’re St. Thomas
the Apostle, provoking
the dove-grey specter
of your grandfather’s
tobacco smoke.

My mane unfurling a loamy
intoxication as though
you’re scything barley.
But not before
you only trust what you
can hold
in your hands.

The fertile spikelets
urging you to hold harder.
The blue-black berries
divulging under
the honey-scented folds.
But not before
you learn that after
hours of sheaving,
even chestnut branches
are smooth
and plundered
as a sheared ewe.

My body falling forward,
creamy cluster  of elder flower.
But not before
you learn to burn
the chaff  you can’t
plough.

And when the empire moth
pauses to tongue
the languor, she is only
pleasuring herself
with an empurpled secret
that left raw,
would poison
most men.

Sara Henning is the author of A Sweeter Water (Lavender Ink, 2013), as well as two chapbooks, Garden Effigies (Dancing Girl Press, 2015) and To Speak of Dahlias (Finishing Line Press, 2012). Her work has appeared or is forthcoming in such journals as Quarterly West, Green Mountains Review, Crab Orchard Review, Greensboro Review, and RHINO, and anthologies such as Women Write Resistance: Poets Resist Gender Violence (2013). She holds an M.F.A. from George Mason University, and she is currently a doctoral student in English and Creative Writing at the University of South Dakota, where she serves as Assistant Managing Editor for the South Dakota Review and on the Editorial Board at Sundress Publications.

Thanks to Sara for sharing her tattoo and poem with us here at Tattoosday on the Tattooed Poets Project!

If you are reading this on another web site other than Tattoosday, without attribution, please note that it has been copied without the author's permission and is in violation of copyright laws. Please feel free to visit http://tattoosday.blogspot.com and read our original content. Please let me know if you saw this elsewhere so I contact the webmaster of the offending site and advise them of this violation in their Terms of Use Agreement.
Posted by Tattoosday at 6:40 AM