We are extending the Tattooed Poets Project through the weekend, giving those who have been enjoying the poetic ink, a little bit more to tide them over until next year.

Today we are being visited by an old friend, Cody Todd, whose tattoos appeared here last year.

This is his latest tattoo, four weeks old, inked at Purple Panther Tattoos off of Sunset in Los Angeles: 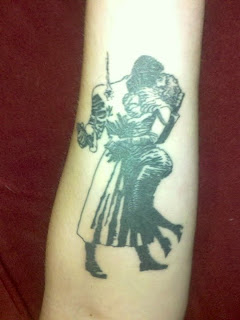 Not too much of a story behind this. It is Marv and Goldie from the "The Hard Goodbye" of Frank Miller's Sin City. The artist who did this is from Tokyo, and her name is Koko Ainai. I admire the precision of her work in copying Miller's extremely elaborate sketching. As Marv and Goldie embrace, he is holding a gun he apparently took away from her and a bullet hole is smoldering in his right shoulder as he lifts her off the ground. That tattoo is the first of what is going to be a kind of sleeve in parts in which I take different scenes from noir films or works and decorate my whole left arm with. Upon seeing Farewell My Lovely with my girlfriend last week, I decided to get the front end of a 1934 or 1936 Buick as my next tattoo.

...I am doing my critical work for my PhD at USC on the "western noir," which is a term I sort of coined for a specific genre of film and literature concerned with elements that typically comprise classical film noir, except they take place in cities in the western part of the United States. As we see in the film, Sin City, it has a "Gothic City" feel to it, but it is most certainly somewhere out in western Nevada, or California. I think the motifs of lawlessness, street and vigilante justice, and the disillusionment with the American Dream are all at work in this kind of genre, and that it also borrows many elements from the Western as a genre as well. If anyone wants to read good literary western noir, I would direct them, promptly, to read Daniel Woodrell, who takes the noir theme and brings it to the Ozarks and southwest Missouri. If Chandler and Faulkner had a love-child, it most certainly would be Woodrell.

Head over to BillyBlog and read one of Cody's poems here.

Cody Todd is the author of the chapbook, To Frankenstein, My Father (2007, Proem Press). His poems have appeared in Hunger Mountain, Salt Hill and are forthcoming in Lake Effect, The Pinch, Specs Journal and Denver Quarterly. He received an MFA from Western Michigan University and is currently a Virginia Middleton Fellow in the PhD program in English-Literature/Creative Writing at the University of Southern California. He is the Managing Editor and co-creator of the poetry journal, The Offending Adam (www.theoffendingadam.com).
Posted by Tattoosday at 12:01 AM