Here on the final day of the 2010 Tattooed Poets Project, we are featuring two tattooed poets (in two separate posts).

First up is Jeanann Verlee, who holds the distinction of being the one poet this year who met with me in person to discuss their tattoo.

The incredible detail of this piece is in the hummingbirds: 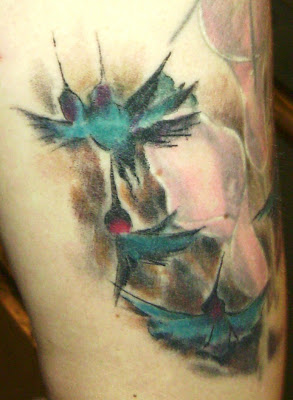 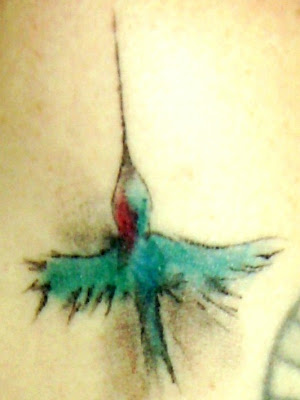 This whole tattoo is based on the cover art from her just-released first book Racing Hummingbirds (Write Bloody Press, 2010). 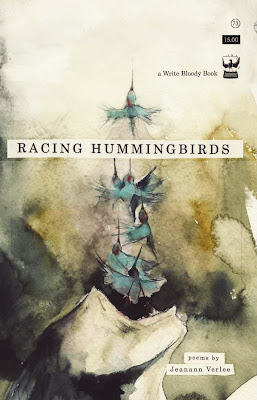 Jeanann knew she wanted her next tattoo to have something to do with the upcoming book. When she had the opportunity to work with an artist she respected, Tyson Schroeder, Jeanann held off on getting new ink and waited to see his art for the cover. She was happy she waited and, loving what she saw, she took the design Tyson created to her tattoo artist, Mark Harada at East Side Ink.

The racing hummingbirds design was placed adjacent to one of Jeanann's approximately fifteen other tattoos. The piece already on her arm consisted of a symbol comprised of Celtic and Nordic runes, and calla lilies, which represent transformation.

It was truly a pleasure meeting Jeanann at Grand Central Station and talking with her about her tattoos and her poetry. One of her poems, dedicated to poet Eboni Hogan, can be seen here over on BillyBlog. Eboni's tattoo (here) follows this post, and her poem is dedicated to Jeanann.

Thanks to Jeanann for taking the time to meet with me, sharing her tattoo, and rounding up an exciting 2010 Tattooed Poets Project!

JEANANN VERLEE is a former punk rocker who collects tattoos and winks at boys. She is author of Racing Hummingbirds (Write Bloody Press, 2010) and her work has appeared in a number of journals and anthologies, including The New York Quarterly, PANK, FRiGG, Danse Macabre, and Not A Muse, among others. An acclaimed performance poet who co-curates the weekly reading series Urbana Poetry Slam at the Bowery Poetry Club, Verlee has performed and facilitated workshops across North America. She was co-author and performing member of national touring company The Vortex: Conflict, Power, and Choice!, charter member of the annual Spoken Word Almanac Project, and is an ardent animal rights and humanitarian activist. She lives in New York City with her best pal (a rescue pup named Callisto) and a pair of origami lovebirds. She believes in you. Learn more at JEANANNVERLEE.com.
Posted by Tattoosday at 7:00 AM