On this final day of the Tattooed Poets Project 2010, we have a double treat - the tattoos and poetry of both Jeanann Verlee (here) and her friend Eboni Hogan.

She prefaces her work with the following proclamation:

"A Note About The Artist: A majority of the work (the shoulder piece, the peacock and the cherry blossoms) on my body were done by an amazingly talented artist named Craig Spencer out of Whatever Tattoo II on St. Mark's Place who was also my boyfriend of almost four years until fairly recently. Yay! It's a sado-masochistic love story! Some liken this to getting a man's name tattooed across my boobs but I can say he is truly one of the only artists I trust with my flesh."

And now the ink: 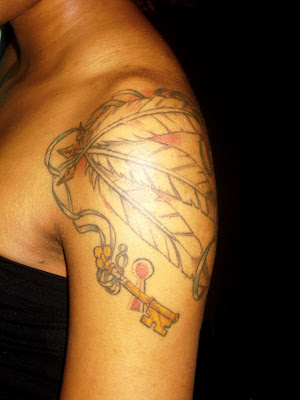 "This shoulder piece is a custom design that took the most amount of tweaking before I actually got it inked. There are three quill pens, a skeleton key and a key hole, all tied together with ribbons. I'd had a strange dream one night in which a creepy old woman handed me a set of keys, tied to three feathers and told me that if I could find the door, the key would let me out... 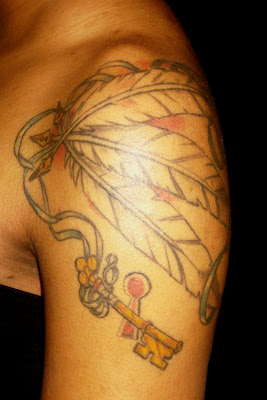 ...In my dream, I draped the key over my shoulder for safe keeping (dream logic...) but when I finally reached the promised door, the key and the feathers were adhered to my skin. The image stuck when I woke up and I talked to the artist about designing a similar piece. He suggested that the feathers be quill pens to pay homage to my love of poetry."

Next we have an image linked inexorably to the history of tattoos in the West, with its background in naval history. It was inked by an unidentified artist at Capitol City Tattoo in Madison, Wisconsin: 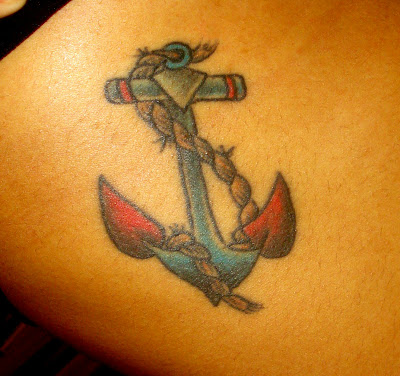 "I adore old school tattoos of the Sailor Jerry variety. I am also really active in the poetry slam community and every team I have ever been coined "the anchor"- the poet put up towards the end of a slam to (fingers crossed) make a home run. At the 2008 National Poetry Slam in Wisconsin, I decided it would be suitable to get this piece on my ribs."

Next up we have some cherry blossoms on the back of Eboni's right biceps: 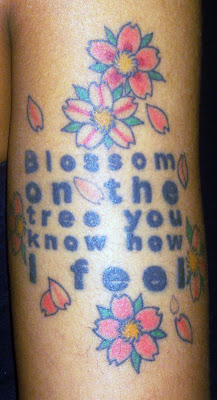 "Blossom on the tree you know how I feel. Text by unknown artist, Addiction Ink, St. Mark's Place, cherry blossoms by Craig Spencer. If my life were a television series, Nina Simone's song "Feeling Good" would be the theme song. On my worst days, this is the never-fail anthem. The particular phrase that I decided on just happens to be the line in the song that feels infinitely more magical when sung at the tops of one's lungs. Try it."

And last, but not least, this lovely peacock:

"Peacocks are symbols of renewal and are revered by multiple cultures across the world. Furthermore, let's face it- they got a whole lotta swag. I found a vintage painting of a peacock that I loved though it's not the traditional green and blue image people are used to seeing. I got it on my left hip so that it could also serve as a cover-up for a pretty awful tattoo I got when I was 17 and foolish."

Thanks to Eboni for sending along so many tattoos for us here at Tattoosday. Be sure to head over to BillyBlog to read one of her poems, dedicated to poet Jeanann Verlee, here. Jeannann's tattoo (here) precedes this post, and her poem is dedicated to Eboni.

24 year-old poet, actress and Bronx native, Eboni Hogan, has performed in over 30 U.S. cities and facilitated workshops from refugee camps to prestigious universities. She studied theater at New York University's Tisch School of the Arts. She is the winner of the 2010 Women of the World Slam Poetry Slam, the 2008 Urbana Grand Slam Champion and a two time representative of the Nuyorican Slam Team. She is published in the anthologies His Rib and Double Lives and recently released her first collection of poetry entitled Grits through Penmanship Books.
Posted by Tattoosday at 5:37 AM