For those of you who have been diagnosed with TPWS (Tattooed Poet Withdrawal Syndrome), we have your cure.

How about a Tattooed Poet of the Month?

Meet K.T. Billey, who is sharing this tattoo: 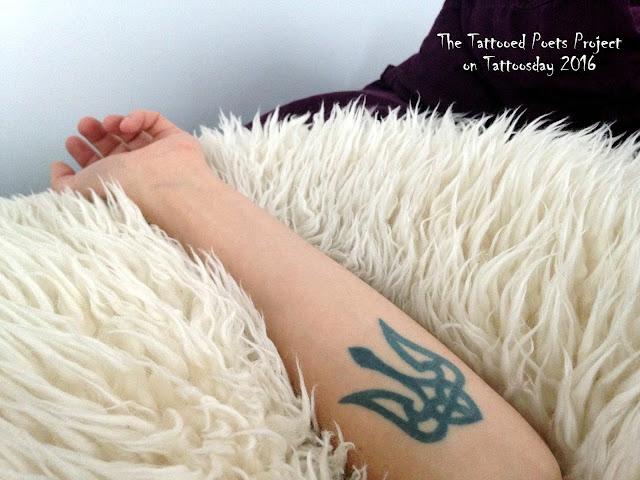 K.T. explains that this is "Vladimir's trident, also a hawk and a shape that I've always loved the look of." She elaborates:


"Originally the personal insignia of Vladimir the Great, it became the national symbol for Ukraine after the dismantling of the Russian Empire. It lost its official status during the Soviet era but was still used by Ukrainian nationalist groups—today it's on the Ukrainian coat of arms. As you might imagine, there's been a resurgence in the symbol's political significance. It took me a while to realize why I was getting double takes at the Russian Turkish baths.

My mom's family immigrated from western Ukraine to northern Alberta, Canada. I grew up Ukrainian folk dancing and knew at about 13 that I'd eventually get this tattoo, I just couldn't decide where. That was about the time I became serious about dance and was debating display and privacy. A few months after my mom died I put it on my forearm—skin I see relatively often. It's a reminder of myself and a way of carrying her along. I sketched the straight lines into more curved wings and got it done next door to the sex shop I worked at, shooting for a vascular blue. The artist's name escapes me now but she was an ex- English literature PhD candidate whose union had gone on strike over unfair intellectual labour. By the time the protest was over she'd decided she'd rather draw and she dropped out."

I originally asked K.T. if she wanted to wait until next April to share, or if she wanted to be an off-season contributor. Last year, we had so much overflow, we were able to share Tattooed Poets weekly through July. She asked if she could appear sooner, rather than later, and I am happy to comply.

I might add, there is a significance to posting this tattoo today, as well. For, believe it or not, it was on June 11, 980, a mere 1036 years ago, when Vladimir was coronated as the Grand Prince of Kiev. It only seems fitting, no?

K.T. also shared the following poem, "Your Stomach or Mine" which was first published in Poor Claudia's PHENOME series. She notes that "it's complementary to the bird because it's also addressed to my mom," and added that "the title of my book, which is largely how I processed that loss, happened to come from this poem."

Your Stomach or Mine?


The sun is thin, the air is triage, and you,

you are an acolyte—an adult falcon

inside me, wondering where that screech

came from. Goes to. Feeds. It’s not injury, no

of grief. When we lost power I called

twice, afraid to forget how

votives, brunching by the robin egg

church. Remind me why bruises change

colour while you supervise this hack job

though your last last cross-stitch.

Spin my funeral necklace, just so

it hides the vulgar mechanics, the hook

and eye of death turning tricks.

I heard it. It left a message

in metallic thread on the mirror

that broke in the storm, so I let

my molars rot and made batteries

with the fillings. They feel better, biting

down. The tin foil reminds me

there’s a little bit of enemy

in everyone I love, and this

is updraft, beat by beat, and tailspin.

Nothing umbilical about it.

K.T. Billey’s poetry collection Vulgar Mechanics (seeking publication) was a finalist for the 2015 Pamet River Prize from YESYES Books. Now a finalist in the Poets Out Loud Prizes, it is being rendered into Spanish by poet Soledad Marambio, whose acclaimed translation of Anne Carson's "The Glass Essay" was published in 2015. Originally from rural Alberta, Canada, Billey won Vallum's 2015 Poetry Prize and her poems have appeared in journals such as CutBank, Denver Quarterly, The New Orleans Review, and Prelude. An Assistant Editor for Asymptote, she translates from Icelandic and Spanish.

Thanks to K.T. Billey for being a Tattooed Poet of the Month  and sharing her work for the Tattooed Poets Project on Tattoosday!

If you are reading this on another website other than Tattoosday, without attribution, please note that it has been copied without the author's permission and is in violation of copyright laws. Please feel free to visit http://tattoosday.blogspot.com and read our original content. Please let me know if you saw this elsewhere so I contact the webmaster of the offending site and advise them of this violation in their Terms of Use Agreement.
Posted by Tattoosday at 2:53 AM