I met Colleen on Penn Plaza and her ankle tattoo jumped out at me from a distance. It was so unusual, I just had to stop and ask her about it. 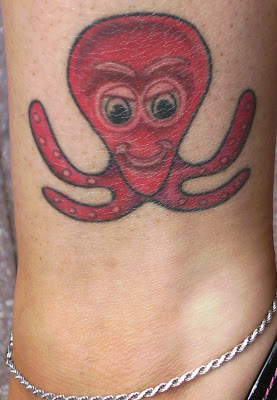 If this four-limbed octopus-like creature looks fanciful, it's because it is based on a child's beach toy used to mold sand shapes.

Colleen explains that she and about twenty of her friends all got this same tattoo, but in different colors, to commemorate their summer where a majority of time was spent at the beach. There was a house involved, which was the epicenter of activity, and the plastic octopus beach toys were on the walls, used as decor. "Quadrapus" became a symbol and mascot for a memorable season.

This was inked by Josh at Broken Heart Tattoo in Keyport, New Jersey. Coincidentally, a tattoo from Broken Heart appeared just this past Saturday here on Tattoosday.

Incidentally, Collen has seven other tattoos, and I couldn't resist snapping a shot of this literary ink: 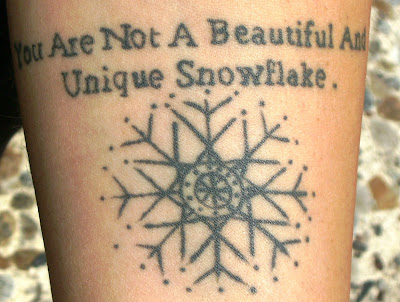 The quote "You are not a beautiful and unique snowflake " is from the seminal first novel Chuck Palahniuk novel Fight Club. Tyler Durden's character states:

"You are not a beautiful and unique snowflake. You are the same decaying organic matter as everyone else, and we are all a part of the same compost pile."

Palahniuk is her favorite author and she loves the meaning behind this quote, from a passage where the speaker is questioning the notion of individuality. Deep down, Collen explained, he's saying we're all the same, that no one is as special as they think they are. Juxtaposed with the snowflake, the symbol of uniqueness, this tattoo makes a bold statement.

Check out a couple other Palahniuk literary tattoos here over on the awesome site dedicated to literary ink, Contrariwise.

This was inked at Silk City Tattoo in Hawthorne, New Jersey by Chi Chi Gunz. Work from Silk City is New Jersey has appeared previously on Tattoosday here.

Thanks to Colleen for sharing her fun and interesting tattoos with us here on Tattoosday!
Posted by Tattoosday at 5:35 AM