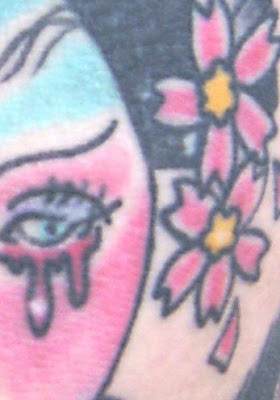 I met Doug on Penn Plaza on my birthday.

He has 14 tattoos and was, by chance headed down to Rising Dragon Tattoos in Chelsea later that day to get more work on a traditional Japanese piece by Horisei (see his work featured previously here).

The goal is to eventually cover his whole upper body with traditional Japanese tattoo art. He already has foo dogs, demons and kite masks. The favorite piece of his that I saw was this geisha:

This was done by Sam Hambrick at Fat Kat Tattoo in Keyport, New Jersey.

Thanks to Doug for sharing his tattoo with us here on Tattoosday!
Posted by Tattoosday at 5:50 AM

A friend and I are big tattoo fans and have tattoos ourselves. We're disappointed by this blog. Why are all of the tattoos you find near Penn Station? We see so many amazing tattoos, in Brooklyn especially, that are so much better than ones you'd see in that area. I suppose you work near there, but you must live somewhere else, right? We love the idea of a New York ink-spotting blog, but we've been disappointed with what you've posted. They don't all suck or anything, but they seem kinda "blah" compared to what we know is out there. Thanks for listening to some honest feedback.

Thanks for your feedback.

You're right about most of the tattoos I've featured being near Penn Station and you are correct to assume that I work near there.

The reason that tattoos from that area seem to dominate Tattoosday is that they are easier to find, because most people in and around Penn Station are in a state of waiting, and are more likely to share as they have time to kill - they're either waiting for a train, or waiting for a friend, or just hanging out.

People hanging out waiting for a train to leave for Long Island are more amenable to sharing their ink than, say, someone walking down the street.

New Yorkers are generally more suspicious about people stopping them in the street while they're trying to walk somewhere. They think I'm either trying to sell them something (such as laser tattoo removal) or who knows what else.

I try to get the best tattoos I can, but Tattoosday is not about just getting pictures of the best tattoos around. There are plenty of sites, many included on my sidebar, that host better photos.

I'll also editorialize and say, the better the work, the more reluctant someone will be to share with a blog like Tattoosday. I've even had people ask me how much I was willing to pay them for the honor of their tattoos being on this site.

I try and go for a vibe, a story, a unique perspective, that the scads of galleries online don't offer. Sometimes a run-of-the-mill tattoo will have an amazing story behind it. The quality of the work is only part of what attracts me to writing about tattoos.

If I wanted to do nothing but show off phenomenal tattoos, I would just hang out in tattoo shops, or go to conventions (I photographed only 3 at the NYC convention this past May). But there's something inherently thrilling about finding tattoos randomly and telling the stories behind them.

I do hope you continue to visit Tattoosday occasionally. I am sorry that you and your friend are disappointed, but I hope you understand a little more of where I am coming from.

I've been following you daily blogs for a few months now... And honestly, I very much enjoy the pictures and the stories that go along with them. Regardless of what the tattoo is of or the quality of the work, each and every tattoo has a story. You blog shares the story and the tattoo with the readers. It is true, as Caryn points out, that some of the tattoo' shown here are of poor-ish quality, but hey - that's part of the whole point!!! If each and every blog showed a perfect tattoo each and every time, readers would presume that the tattoo world contained nothing but perfect tattoos, and let's face it, the idea of what a perfect tattoo is - is arguable!!
I find your blogs most interesting. Keep them going, I look forward to reading it each day!!
Cheers,
Mark Stabler
Badspirit Designs and Tattoos
Alberta, Canada