Horror Goulash with a Side of Power Mushrooms 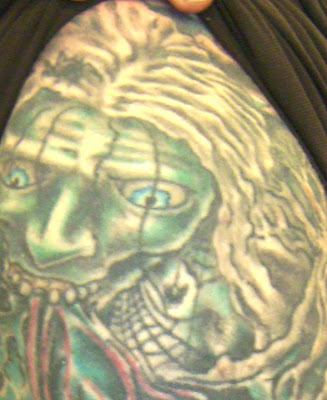 I was passing through Century 21 Department Store when I spotted Jason, a web designer who estimates he is 50% covered in tattoos.

He offered up this sleeve, which he worked on for six sessions with the tattoo artist Sean Sweeney at Lola's Tattoos in Bogota, New Jersey:

Sean has subsequently moved to Virginia.

They called this piece "Horror Goulash" as it was a big pot of ideas for a sleeve, with an emphasis on the dark and macabre. Over the period of its creation, they collaborated to add ideas to it.

Jason also had this piece tattooed on the back of his left calf:

These are, for the uninitiated, the power mushrooms that are sought after in the Nintendo Super Mario Bros. video games.

Jason loves Nintendo and admitted, it was a "spur of the moment" piece tattooed "somewhere in the Village".

Thanks to Jason for sharing his amazing ink with us here on Tattoosday!
Posted by Tattoosday at 6:59 AM