Katte's Memorial for the Artist, Gone Too Soon

I met Daniel and Katte as they were about to go into the subway station at 34th Street and 7th Avenue.

Although Katte had a lot of visible work that was interesting, she rolled up her left pant leg to show me this interesting collage on her calf: 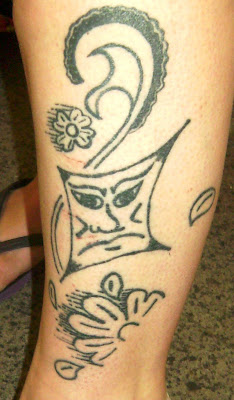 The tattoo, along with much of her work, was inked by her step-father, who works out of his home.

The piece is a memorial for an ex-boyfriend, who was hit by a car and killed in February 2008.

He had been into Japanese art and graffiti and had drawn this on her wall. After he died, she transposed it so that it could be tattooed on her.

She wears it as a keepsake by which to remember him now that he's gone.

I thank Katte for sharing this very personal piece with us here on Tattoosday!

See what Daniel had to offer here (or just scroll up if you are reading this chronologically).
Posted by Tattoosday at 6:00 AM