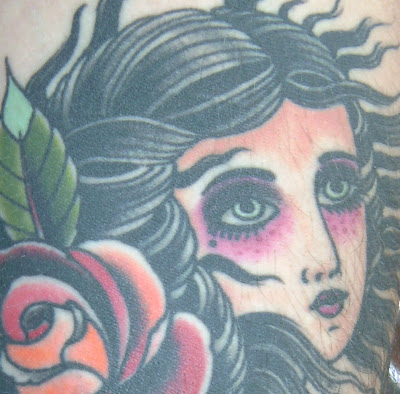 I met Mason at the 7th Avenue Street Fair in Park Slope on Father's Day.

His offering for Tattoosday, however, was inked here in New York. It is a take on the traditional gypsy tattoo which I have been seeing a lot of lately:

Mason went to Kings Avenue Tattoo in Massepequa, Long Island, with a general idea for this piece, which is something he wanted to get for a while.

The artist, Grez, added a Fleur-de-Lis to the piece, per Mason's request, as a nod to the city of New Orleans where he grew up.

Thanks to Mason for sharing this fantastic tattoo with us here on Tattoosday!
Posted by Tattoosday at 6:39 AM