In my previous post, I described meeting Daniel and Katte. And, although Katte's work was what initially prompted me to stop the couple, Daniel offered up the bigger surprise.

I have yet to come up with a term for the phenomenon, but anyone who responds to an inquiry about a visible tattoo with an unprompted unveiling of a covered one, earns a place in Tattoosday lore.

Daniel lifted up his shirt to reveal "the start of a back piece": 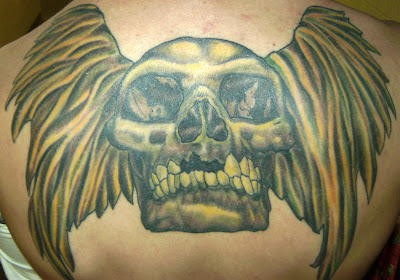 He went to Chuck at Broken Heart Tattoos in Keyport, New Jersey, with a general outline and gave the artist the "freedom to shade and color" as he saw fit. Three sessions and nine hours later, Daniel had this kick-ass skull on his back to anchor what will eventually be a much larger piece.

Thanks to Daniel for sharing this awesome tattoo with us here on Tattoosday!
Posted by Tattoosday at 6:05 AM