Elvis and the Saint 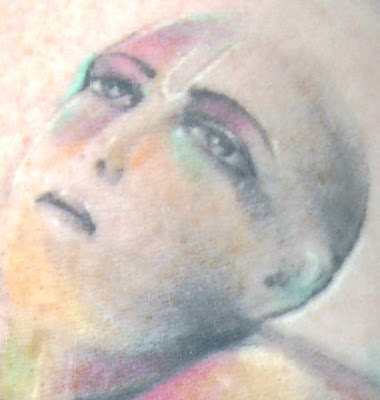 I met Kristin and Jason at the 7th Avenue Street Fair in Park Slope on Father's Day.

Street fairs in New York City generally occur in the summer months and, to an inkspotter like me, they are heaven on earth.

Well, perhaps I exaggerate. They are also hot, crowded, and dangerous. I have seen many a fair-goer clipped by a slowly-moving baby stroller. But I digress.

There were tattoos aplenty at the street fair, and one is so overwhelmed by the sheer volume of great ink, it is often paralyzing to pick just one. Compare it to letting a child lose in a candy store, and tell them they can have all the candy they want, as long as they spend just a dollar.

So when I saw a few people walking along that were festooned with tattoos, I stopped them as soon as I could wend my way through the crowd and get their attention.

When someone has "lost count" of how many tattoos they have, it is safe to say that they have a lot.

She loves Elvis Presley and this portrait, based on a shot of him from the film Girls! Girls! Girls!, is wonderfully done.

She noted that this was an older Elvis, but definitely pre-Vegas.

Jason, who was walking with Kristin, and also incredibly inked, offered up his right forearm as well:

Upon returning from a trip to India several years ago, Jason brought home a poster of a Hindu saint. He loved the poster so much, he decided to have it tattooed.

I'll be honest here. I was initially disappointed that these were the tattoos that Jason and Kristin offered. Not that they're bad tattoos. Far from it. But, they had other work I admired more.

However, I do ask people which tattoos they'd like to share, so I certainly have no right to complain.

But, in the week or so since I shot these photos, I've come to appreciate the level of skill and artistry with which these pieces were created.

Both were inked by Josh Carlton at the Great American Tattoo Company in Indianapolis.

If you look closely, he has infused each tattoo with colorful highlights that really accentuate the tattoos with an extra element of artistry. 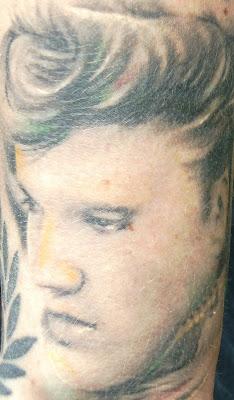 It's a brilliant effect.

Thanks to both Kristin and Jason for sharing these two amazing tattoos with us here on Tattoosday!
Posted by Tattoosday at 5:49 AM