I generally avoid featuring full sleeves here, because of the limitations that posting them has - it is difficult to fully capture the artistry in the work. But, on occasion, the tattoos are so amazing, I can't resist.

Such was the case with Michael, who shared portions of both sleeves with me. Here's a sliver of his right arm:

To fully capture the magic of this tattoo, here's a fresher, professional collage, courtesy of the artist Stacey Sharp: 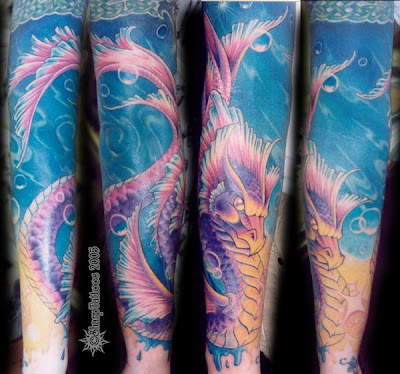 Michael was proud of the fact that this tattoo took second place in the "Best Sleeve" category in the 2007 Philadelphia Tattoo Convention.

And although the top section of his left arm is still "under construction," the bottom half is no less spectacular:

The detail and shading is just absolutely phenomenal: 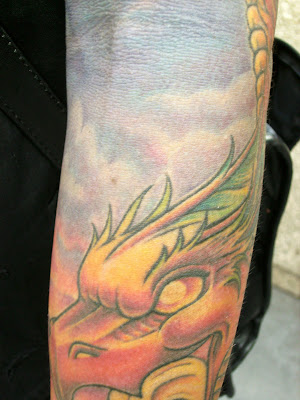 Michael, a professional make-up artist, explained that he embarked on these sleeves when he was going through a rough patch in his life and that, as a water sign, the creation and depiction of an aquatic dragon, helped mark a spiritual process that gave him strength while enduring life's trials and tribulations.

He estimated that the right, award-winning sleeve, took approximately 36 hours in total work and that his right sleeve is fifty hours in, and counting.

What's interesting about this post, aside from the brilliant tattoo work, is that I have a nice online friendship with the artist, Stacey Sharp, and that she provided me with her prospective of these sleeves. Generally we only hear from the host.

Stacey comments about her work on Michael:

Some interesting info about Michael's arms...

"The WaterDragon (right arm) was drawn on his arm at a moment's notice. He was only looking for 'a little something to add to his armband'. Took about an hour to draw on with a marker and another hour to outline. All of the blue background was done in one shot, 4 hours, including elbow and ditch (Michael advises to NEVER do those two areas at the same time). The lighter water swirls were added at a later date. The entire thing took 36 hours to complete. It's also the only tattoo I've done that has a 'Title'- A warm thing in a cold place. His species is WaterDragon. His proper name is Fathom... but sometimes we fondly refer to him by his nickname: The Sea Chicken!

The dragon on his left arm is Random. That's her name. Why? Because she is. :) Fur and feathers take much longer to detail. We didn't keep track of her time like we did with the WaterDragon. She's more of an Air/Fire combination... where the WaterDragon is more guarding, silent sentinel, she's the fun, spontaneous side. Whimsical."

So there you have it, an additional perspective, from the artist. It's interesting to get an additional point of view that expands on the notes I've scribbled down in the street.

Much thanks to Michael for enthusiastically sharing his work with us here on Tatoosday! And an additional thank you to Stacey Sharp for contributing her thoughts as well, in addition to granting permission to using the photo collage of the right sleeve.

Stacey's work has appeared on Tattoosday once previously, a much smaller, whimsical piece, here.
Posted by Tattoosday at 5:42 AM