Fate Leads Me to Abundance

My commute home generally starts at the 34th Street subway station, on a Brooklyn-bound N Train.

Sometimes, if the train is in the station when I come down the stairs, it is not clear if it's an N train or a Q train. Generally, if it doesn't matter completely, I hop on and sort it out later. Hesitation can cause me to miss the right train.

So I jumped on the train before the doors closed and then realized I was on a Q. No biggie, it's still headed in the right direction, but I decided to disembark at the next stop and walk toward the back of the 14th Street platform and wait for an N.

Halfway down the platform, as luck would have it, I ran into Sean and I had to stop and ask him
about this unusual tattoo on his inner left forearm: 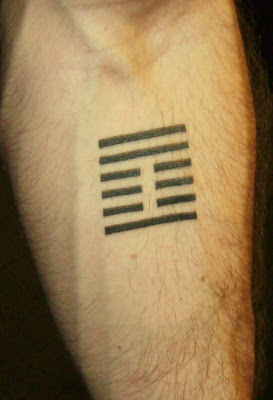 This, it turns out, is from the I Ching, a classic Chinese text which includes sixty-four hexagrams, each representing a description of a state, or process. The hexagram inked here is number 42, which, as he understands it, represents Abundance and Unlimited Potential. It's literal translation is "Augmenting". There's another interpretation similar to Sean's here.

In another sense, the bars represent, in a pictographic sense, land, two mountains, and thunder and rain, which combine to mean fertility of the earth.

Sean is very much into Asian tattoos and has a piece in progress on his right shoulder. He thought about this particular hexagram for about a year and a half before heading down to Dare Devil Tattoo to get it done. The artist, Chuck Donoghue, has since relocated to Atlanta, but often returns to Dare Devil.

Work from Dare Devil has appeared previously on Tattoosday here.

Thanks to Sean for sharing his I Ching hexagram tattoo with us here on Tattoosday!
Posted by Tattoosday at 5:48 AM