Back on June 23, I spotted Caroline walking in Penn Plaza, with this fascinating tattoo popping off of her right thigh: 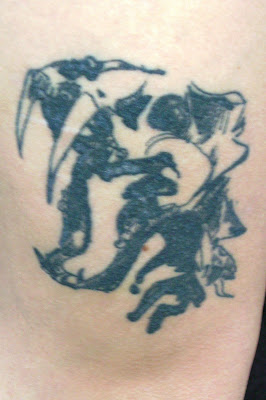 This is Caroline's second tattoo and is based on a sketched she drew of a sabre-toothed tiger skull. She is a visual artist whose website can be seen here.

The tattooer in Portsmouth, New Hampshire, did a phenomenal job in under an hour, "capturing the cross-hatches and lines that [she] was so picky about".

I sent her an e-mail with a follow-up question about her choosing her thigh for the tattoo, which seemed unusual for someone who didn't have a lot of ink. She wrote back with the following response:

"I think I chose my thigh because I wanted a bold graphic placed on the most powerful part of my body. I was working as a truck driver/trash collector on an island at the time, and my body was toning up and changing; I became aware of muscles I didn't knew I had. So when I drew the sabre-toothed tiger and decided I wanted it as a tattoo, I was drawn to the hinge of the thigh for placement. Something functional and flashy, but not in the standard spot. It's a flirtatious without being trashy."

Thanks much to Caroline for sharing her awesome tattoo with us here on Tattoosday!
Posted by Tattoosday at 6:41 AM