I met Elliott D. Smith at the Union Square Barnes & Noble last month and took pictures of his tattoos for The Tattooed Poets Project. I also met his roommate Jared, whose work will appear here tomorrow.

Elliott has quite a bit of work, including a sleeve-in-progress, which is being constructed by the wonderfully talented Joy Rumore at Twelve 28 Tattoo in Williamsburg, Brooklyn.

Check out this composite of Elliott's right arm: 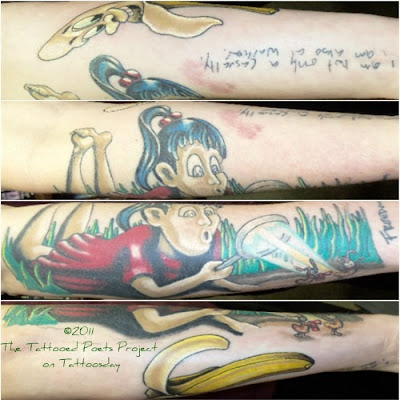 This still-incomplete tattoo is part of a sleeve based on a mural at the Morgan Street stop on the L train in Brooklyn.

The sleeve has the Alice in Wonderland figure at its center, but a lot of other images, like the banana as well. Elliott pointed out in the photo above that the banana (lower right corner) is much smaller. For the purpose of the art of the tattoo sleeve, its scale has been increased significantly.

Elliott added that he visually enjoys the image of the mural, and his "own little Alice in Wonderland dream land" is slowly taking shape on his flesh.

Also on his right arm with the sleeve is this quote from "The Transformation of Silence into Language and Action," by Audre Lourde: 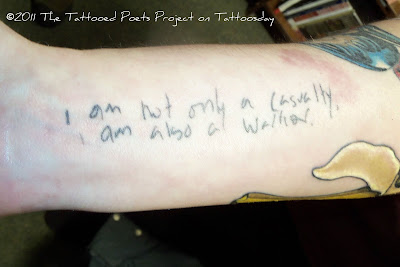 The quote is "I am not only a casualty, I am also a warrior."

There are times when a writer's words resonate so loudly in your ears, they shake you to your core. Elliott told me that he "read it [these lines] one day and the next day got the tattoo."

He offered up this interpretation of the line: "it's easy to think of yourself as victim," he said, but succeeding in life is about "surviving and fighting through victimhood".

Elliott also has these words on his outer wrists: 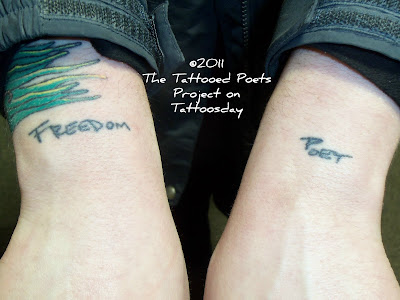 This is the third poet this month with "poet" inked on his or her flesh. However, the combination of "freedom poet" adds another dimension to the corporeal text.

This was a "spur of the moment" tattoo, Elliott told me, elaborating that aside from the obvious "poet," he is "holding freedom in his hand and facing out".

Finally, we don't get a lot of lower back tattoos here on Tattoosday, but when we do, they are extraordinary:

Elliott took a couple of photos into Joy and she crafted this design. The concept is a spin on the "power to the people" idea, but with an emphasis on urban people. "Most Americans live in cities," he explained, "but [they] don't have power". This is a spin on the frustration that many feel, that the values of the citizenry of the American cities are not represented by the government.

As for poetry, Elliott offered us this work:

~ ~ ~
Elliott D. Smith reps Louisville, Cincinnati, and Brooklyn. When he's not  working with formerly incarcerated people or conducting research on masculinity, he drinks whiskey and talks too loudly. He believes in the power of tattoos, reference books, and matching music with the weather.

Thanks to Elliott for sharing his ink and his poetry here with us on Tattoosday!
This entry is ©2011 Tattoosday. The poem is reprinted here with the permission of the author.

If you are reading this on another web site other than Tattoosday, without attribution, please note that it has been copied without the author's permission and is in violation of copyright laws. Please feel free to visit http://tattoosday.blogspot.com and read our original content. Please let me know if you saw this elsewhere so I contact the webmaster of the offending site and advise them of this violation in their Terms of Use Agreement.
Posted by Tattoosday at 6:08 AM

I am curious about the poem - it seems to be a non-rhyming terzanelle, I think. Was the form intended or just turned out that way? Whatever it was - it's intriguing and very well written.

I should have mentioned the poem is a pantoum.

Pantoum it is. I wasn't even close. Back to school for me!

Be that as it may, I do really like this. It's intriguing and it's slightly sinister and the overall impression is one of great insight.