It is with great pleasure that we present another tattooed poet, Puma Perl. She offered up this beautiful tattoo:
We'll let Puma talk about this great piece:

"Everything of importance in my life has involved Coney Island. As the developers moved in and the city became more and more a playground for wealthy transplants, I knew I wanted to pay homage with a tattoo. I love the Mermaid Parade and the Wonder Wheel, so envisioned a mermaid with the Wonder Wheel in the background. A friend of mine happened to give me a magnet that she had bought at Lola Starr on the boardwalk (http://www.lolastar.com/) and I used that as the basic shape, changing the tattoo on the mermaid’s arm to a tiny replica of one of mine. I’d wanted to add my eyeglasses, but it was too tiny a detail. I contacted the amazing Emma Griffiths, Porcupine Tattoo, 31 Norman Avenue, Greenpoint, Brooklyn, and made an appointment for a consultation. I brought the magnet and a photo of the Wonder Wheel and we collaborated. Emma drew our vision of the Wonder Wheel in the background and modeled her mermaid on the magnet."

Puma, as is the custom, also shared a poem. She commented that her poem is "about the Mermaid Parade, which also mentions Cha Cha’s, which was slated to be torn down but was recently granted one last season, along with 8 other unofficial Boardwalk landmarks." She also noted that "this poem was previously published in the Coney Island Examiner, along with several other poems about Coney Island." You can read all of them here.
The Best Day of the Year
We hung out on the roof at Cha Cha’s
watching the Mermaid Parade.
This is my favorite day of the year,
said Danny, snapping pictures
with a camera recently lifted
from the trunk of a Buick.
They need Mambo Mermaids
I said, as Zombie Mermaids,
and Vampire Mermaids
sauntered by. He ignored me,
entranced by glittery pasties
and hundreds of tits.
I had met Danny at the Siren Festival.
You can be my Coney Island Baby
was the first thing he told me,
while the New York Dolls played.
We danced straight down Surf Avenue,
all the way to Seagate where he rented
a room from a bunch of rabbis.
We’d been together almost a year.
You don’t need calendars on the boardwalk,
time is measured by cyclone screams,
sideshows, and wooden horses,
by two shadows on the sand,
by memories of striped chairs,
and thunderbolt rides.
We climbed down the stairs.
Danny tried to steal an antique car
but nobody took him seriously.
Coney Island kids paraded in wigs
left behind by drunken mermaids,
who now littered the street,
pasties lost, and breasts drooping.
This is the best day of the year,
said Danny, as we drank warm beer
and headed towards the after- parties.
We were never invited, but it was the best
day of the year, and we weren’t worried
about a thing.
© puma perl, 4/13/09
~ ~ ~
I want to interject that this poem coincidentally hearkens back to a very fortuitous day in the history of Tattoosday. For it was on July 21, 2007, when I attended the Siren Festival, the same day mentioned in the poem, when the first seeds of the Tattoosday concept began to sprout in my brain. For it was on that day, when we saw the New York Dolls, that I spotted a Keith Haring tattoo and started to connect the idea of asking about someone's tattoo, and blogging about it. Ten days later, the first Tattoosday post came to life. My recap of that day in Coney Island is recapped here, on BillyBlog.
Puma Perl is a NYC-based writer, performance artist, and curator. Her poetry and fiction have been published in over 100 print and online journals and anthologies. 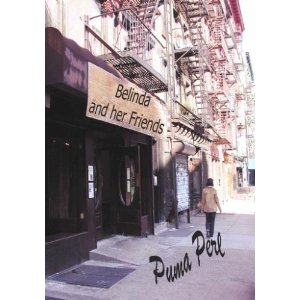 She is the author of the award-winning chapbook, Belinda and Her Friends, and a full length collection, knuckle tattoos. 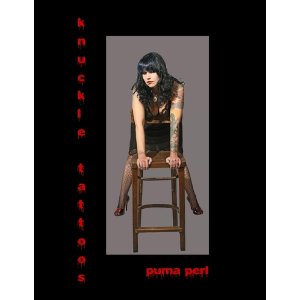 She lives and writes on the Lower East Side and has facilitated writing workshops in community based agencies and at Riker’s Island, a NYC prison. She is a founding member of DDAY Productions, which presents poetry and performance events. Link to her blog for info about book purchases and events: http://pumaperl.blogspot.com/.

Thanks to Puma for sharing her awesome tattoo and poem here on Tattoosday, on the Tattooed Poets Project! Remember, all contributors, including those from 2009 and 2010, are indexed here.
This entry is ©2011 Tattoosday. The poem is reprinted here with the permission of the author.

Wow - stunning! Love the backstory, the art, the poem, and Bill's aside.