Today's tattooed poet is Stephen Roger Powers, who is sharing this tattoo of an iconic figure from the music industry:

I've been a Dolly Parton fan since my family took a road trip to Tennessee in 1987.  We stopped at Dollywood, and I fell in love.  When I was in college I wanted a Dolly tattoo, but I never went through with getting one.  I kept the thought of it in the back of my mind for years, and when I started writing poems about Dolly and my frequent trips to Dollywood to see her perform benefit concerts for the Dollywood Foundation, the idea slowly crept forward again.  Then my book of Dolly poems came out in 2009, and I knew it would soon be time.  One day last year my friend Liz, who has 14 tattoos herself, told me to stop thinking about it, stop talking about it, and just do it.  Sounded reasonable to me.  So Liz drove me to Liberty Tattoo in Atlanta and introduced me to Michael "Shack" Shackelford, the artist who'd done most of hers.  Shack drew up a stylized, cartoonized version of Dolly from the cover of her 1977 album Here You Come Again, taking some creative license by adding pokey nipples, which was fine with me. 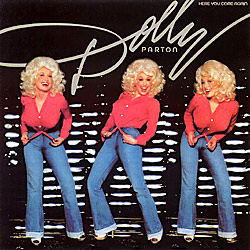 Liz kept saying she wasn't going to let me back out of it now that she'd driven me there and gotten pulled over for an illegal u-turn on the way, so Shack sat me down, we got started, and today I have Dolly Parton inked on my forearm.  While the tattoo is based on a full body shot of Dolly and it runs down my entire right forearm from elbow to wrist, the photo here is a close-up of just her face and torso, which I think makes Shack's details easier to see.

Accompanying this Dolly tattoo is Stephen's poem, "Dolly and the Frog Strangler," which appeared originally in Shenadoah and can be found in his book The Follower's Tale (available here):

Dolly and the Frog Strangler

I was writing a song with Dolly when we ran out of gas
near exit 201 going south through a sudden downpour in Indiana.
The first verse was something about how hay bales grow
darker in the rain and the sides of barns turn from red to brown.
We were also hauling a Dolly Parton pinball machine by Bally.
The backglass was in the backseat. The playfield, with rubber
flippers intact, cartoon Dolly barefoot in denim shorts, was too big to go
in the trunk all the way.  It hung over the bumper by bungee cords.  Every bump,
my worn-out shocks groaned and banged like rickety roller coasters.
We waited for a trucker to bring us a gallon.  Hail popped on the roof
like too many warped records playing at the same time.  We were bored,
looking for ways to amuse ourselves.  Dolly tapped her dragon lady nails
on the dashboard.  I used my sleeve to wipe away windshield fog.
After we hummed a middle C we wrote the second verse,
something about long hair between your lips and mountain berry shampoo
scent in your nose when you kiss someone in the wind.
We rolled down the windows to let the storm heat evaporate
some of the air conditioning.  Dolly’s wig got tangled and wet.
The strangest thing was happening: The pinball machine
kept flashing hot pink and lavender.
Maybe lightning hit the cord trailing behind.  Or else something lit it
up from our mind’s eye that saw corn tassels rolling in this gully washer
over the fields as applauding hands of cheering crowds.
Our chorus was something about how you look out
your rearview mirror and it’s still visible after a mile
passes, maybe two if the countryside is flat, but then it fades
away and is gone, and you can’t remember anymore what mile
marker it was by when you passed it.
~~~

Stephen Roger Powers is the author of TheFollower's Tale, available from Salmon Poetry.  His work has appeared in Shenandoah, 32 Poems, Dislocate, and Margie.  He divides his time between Wisconsin, Georgia, and Dollywood.

A sincere thanks to Stephen for sharing his poem, tattoo and his love of Dolly Parton here with us on Tattoosday!