Today's tattooed poet is Stephen Caratzas, who was sent our way via Jillian Brall, a tattooed poet who has appeared on the Tattooed Poets Project twice before (here and here).

Stephen sent along this cool photo: 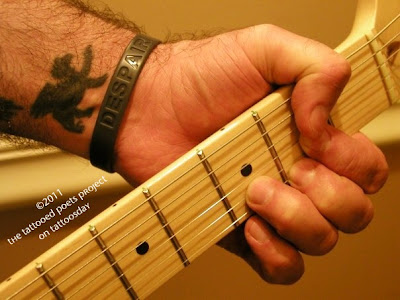 The tattoo in question is on his wrist. For a closer look: 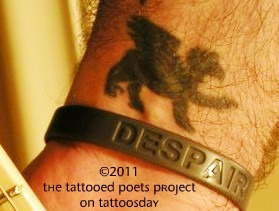 "The tattoo is a griffin, inspired by an image of a griffin holding a Walther PPK automatic pistol on the cover of Ian Fleming's On Her Majesty's Secret Service. The artist, whose first name was Mike - don't recall his last name - decided to make the gun into the griffin's paw, which I agreed was a sensible idea.

I got the idea for a tattoo on the inside of my wrist from one of the characters (Casper, I believe) in Larry Clark's film, Kids. I liked the idea of having a visible tattoo even while wearing a long-sleeve dress shirt."

The tattoo is among eight Stephen has, and was inked at Fun City Tattoo on Macdougal Street in Manhattan back in the late 1990s.

Stephen sent us several poems, but I liked this one best:

~ ~ ~
Stephen Caratzas is a writer, musician and visual artist living in Hastings-on-Hudson, New York. His writing has been published in Terra Incognita, Maintenant 5, the tiny, and many other journals.

Thanks to Stephen for sending us his tattoo and poems! We here at Tattoosday are grateful for his contribution.


This entry is ©2011 Tattoosday. The poem is reprinted here with the permission of the author.

If you are reading this on another web site other than Tattoosday, without attribution, please note that it has been copied without the author's permission and is in violation of copyright laws. Please feel free to visit http://tattoosday.blogspot.com and read our original content. Please let me know if you saw this elsewhere so I contact the webmaster of the offending site and advise them of this violation in their Terms of Use Agreement.
Posted by Tattoosday at 8:26 AM

The cool photo was taken by my talented wife Sandra Yingling.

very nice. great to see steve's tat and poetry. thanks for posting them.