Last year on the Tattooed Poets Project, the best ink we saw belonged to Seth Berg, hands down.If you don't believe me, check it out here.

Seth has the honor of being the only previous tattooed poet to return to the site this year. And he has sent us a quintet of tattoos, choosing the theme of "tattoos which have faces on them." And away we go:

Seth explains that "the two faces depicted in Audrey Kawasaki paintings are part of a half sleeve on my right arm."  Why does he have Kawasaki art inked on his flesh? "Audrey Kawasaki is one of my favorite living painters and the half sleeve is a tattoo combining two of my favorite paintings of hers," says Seth. "I have seen other Kawasaki tattoos," he continues, "but I am quite impressed with this double-painting-half-sleeve blend."

Next up is this Lego piece:

Seth says "the Lego head is on the back of my left calf ... [and is]  one of the few 'walk-in' tattoos I have. I had just purchased an Exo-Force Lego set and was quite amazed at the progression of facila expression." He adds, "I decided to honor the old school original on my leg. I grew up wanting every Lego piece on the planet. I couldn't not get a Lego tattoo."

Next up is this piece:

Seth says "the skull is on the lower front of my left bicep...I had always been drawn to a refined black and gray skull and cross bones."

"Plus," he adds, "pirate flag depictions are pretty cool."

Finally, we have a jack-o-lantern on the inside of  his left bicep:
Seth explains: "I am a sucker for Halloween--my wife and I had a Halloween-themed wedding the Saturday of Halloween weekend and we host a Halloween bash every year--thus, the Jack-o-lantern was a natural addition to the collection." In case you're wondering about the word "rain" in the photo, it is not a word in Shelley Jackson's Skin Project, he just loves the rain, and this is one of a "multitude of font and literary tattoos" that he possesses, so we know what Seth is giving us next year!

Seth explains that "all of the tattoos, with the exception of the skull and bones, were completed by Claudia "Billy" Baca at Saint Sabrina's in Uptown, Minneapolis." He notes, "however, she currently works in Austin, Texas at Bijou Studio."

As for a poem, this is what Seth has offered to share with us:


Douse the head of a cat tail

into a soapy mixture

with a steel rod or femur;

open your face to the air.

spill from your mouth,

remember to light the dark,

sew feathers to your fingertips.

snacks of rodents and amphibians,

tell them that hunger is an essential

When, from the ground,

they are unable to ascend,

lend them your stitched fingertips

and take to the sky on fire. 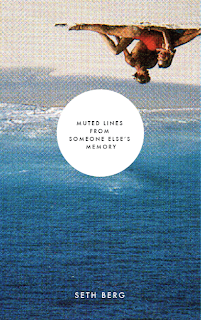 Seth Michael Berg earned his MFA in poetry from Bowling Green State University in 2003 and since has been bouncing around the country teaching, tending bar, sculpting, writing, and occasionally snowshoeing. His poems and fiction can be found in Connecticut Review, Lake Effect, Word Riot, JMWW, 13th Warrior Review, Chiron Review, BlazeVOX, Pike Magazine, and Disappearing City Literary Review, among others. His first book, Muted Lines From Someone Else's Memory, was winner of Dark Sky Books book contest in 2009 and rolled off the press summer of 2010. He has since been city-hopping on lecture book tour and will next be in Chicago at the end of April. Berg lives in Chaska, MN with his photographer wife, Ashley, their supernatural son, Oak, and their Saint Bernard, Icarus. When not working, Berg can most likely be found indulging his addiction to hot sauce or slowing down somewhere in a forest. Here is a book link with audio poems and other goodies: http://darkskymagazine.com/books/seth-berg-muted-lines/.

Thanks to Seth, once again, for his invaluable contribution to the Tattooed Poets Project!
This entry is ©2011 Tattoosday. The poem is reprinted here with the permission of the author.

If you are reading this on another web site other than Tattoosday, without attribution, please note that it has been copied without the author's permission and is in violation of copyright laws. Please feel free to visit http://tattoosday.blogspot.com and read our original content. Please let me know if you saw this elsewhere so I contact the webmaster of the offending site and advise them of this violation in their Terms of Use Agreement.
Posted by Tattoosday at 7:58 AM