Today's tattooed poet is Danez Smith. Look at this amazingness: 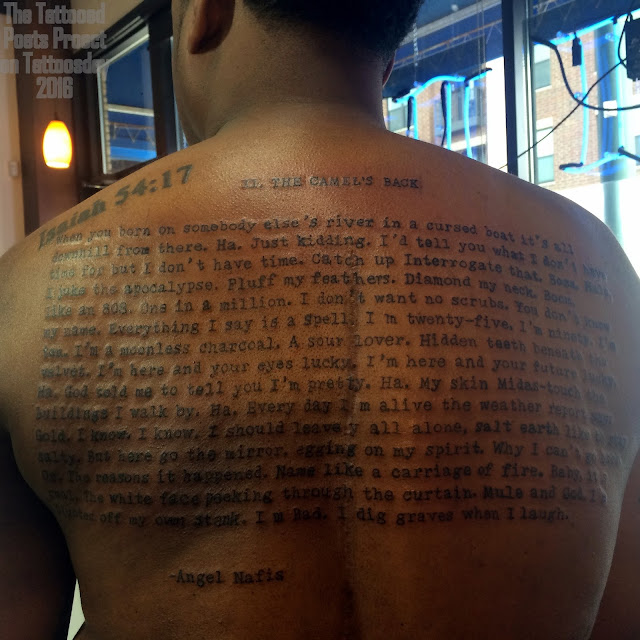 
"i got this tattoo of my good friend Angel Nafis’ poem last summer. the summer before, i had heard her read it on a magical and rainy morning in Brooklyn when i was visiting her. Have you never heard a poem and realized you’ve been waiting to hear it? That even on that first listen or read it just takes you up in familiar arms and imprints itself on your soul? that’s how i feel about the poem. I had been saving the prime back space reality for something that i wanted to dissolve into the earth with, and this is it. Joshua Bennett had some really smart stuff to say about the poem here. This poem is a religion, and Angel is a saint. Now my back is my bible. Hallelujah.

i got the tattoo at a tattoo parlor down then apartment in Minneapolis from my house last year. It was called something else at the time, but now the shop is called Steady Tattoo. I wanted to go for a typewriter feel, and i wanted the text to be bold and asking to be read. something to make we feel like she typed the poem on me."

You can read Angel's complete poem here. Danez notes that his tattoo is only one section of the poem. He also shared the amazing moment when he revealed his tattoo to Angel: 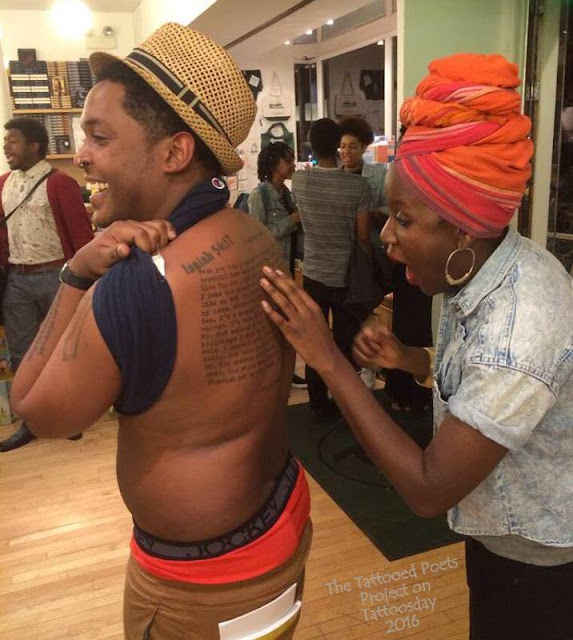 Danez shared the following poem that originally appeared here, on the Collagist:

One buzzfeed test tells me I'm bonafide naughty, the other one tells me I got hella life skills

I typed a description of myself on Web MD, told me by my symptoms I either had the blues or I was a hoe. I guess both are true. What's a slut if not sad? I am lonely even when filled to the brim with some guy who I think is named Robert. Who knows. He's behind me, hacking away at my body like a sous-chef gone mad or maybe just like he doesn't know my name, I'm on all fours on my phone taking quizzes on Buzzfeed to tell me what X-Men character I am & what Sex In The City Character I would totally be BFF's with. If you must know, Wolverine (the one who can't control himself) & Samantha (the one with the mouth shaped like mine (you know, open)). When he's done, he leaves. I wish there was a way to complicate that, but isn't it simple? Isn't this our most ancient & practiced ritual? Haven't men been meeting to be lonely together for years? Is me playing on my phone any worse than some two men laid up in a field of tobacco, one reduced to grunt & thrust, one staring up at the sky making stories out of clouds? Give him his blue heaven littered with doves to keep him while some man dances a brute waltz within him, just leave me my twitter so I can live tweet this mediocre Moulin Rouge #hedoesntlooklikehispics #seveninchesmyass #wheresthebeef #couldagonegroceryshopping #IwonderwhatBeyonceisdoingrightnow #nothingbettertodothancountthestars #allthestarsarelonely #moststarsaredead

Danez Smith is the author of [insert] boy (YesYes Books, 2014), winner of the Kate Tufts Discovery Award and the Lambda Literary Award for Gay Poetry, and Don’t Call Us Dead (Graywolf Press, 2017). Danez is also the author of two chapbooks, hands on ya knees (2013, Penmanship Books)
and Black Movie (2015, Button Poetry), winner of the Button Poetry Prize. They are a 2014 Ruth Lilly - Dorothy Sargent Rosenberg Fellow, a Cave Canem and VONA alum, and recipient of a McKnight Foundation Fellowship. They are a 2-time Individual World Poetry Slam finalist,
placing 2nd in 2014, and a 2-time Rustbelt Poetry Slam Champion. Danez is a member of the Dark Noise Collective. They from St. Paul, MN. you can find them at danezsmithpoet.com and @danez_smif on twitter.

Thanks to Danez for sharing his tattoo and poem with us here on Tattoosday's Tattooed Poets Project!

If you are reading this on another website other than Tattoosday, without attribution, please note that it has been copied without the author's permission and is in violation of copyright laws. Please feel free to visit http://tattoosday.blogspot.com and read our original content. Please let me know if you saw this elsewhere so I contact the webmaster of the offending site and advise them of this violation in their Terms of Use Agreement.
Posted by Tattoosday at 3:56 AM