Our next tattooed poet is Jenn McCreary: 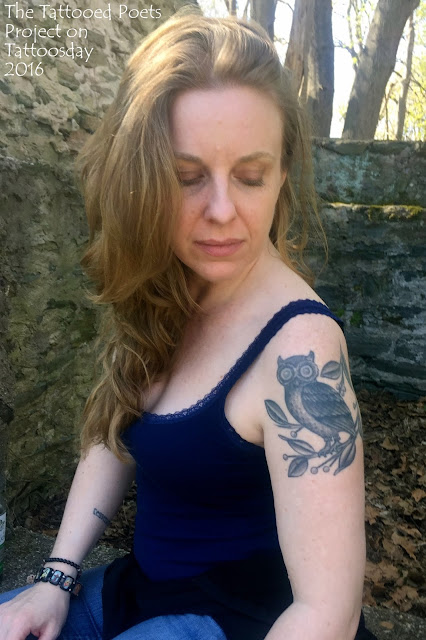 Jenn explains how her owl came to perch on her arm:


"This tattoo was done by Anna Paige, owner of & artist at No Ka Oi Tiki in Philadelphia. It was in part a cover-up job— concealing my first tattoo, a woman’s face in a crescent moon on my shoulder—which I’d gotten around my 21st birthday.

I’d been thinking about this piece for over a year & had collected a folder of images of Athena’s owl, including the Athenian owl on the Greek drachma, which I turned over to Paige during our consult.

When I went back for the ink appointment & Paige showed me her design I told her it was way too big. She countered that it was exactly the size it needed to be to fit the musculature of my shoulder/arm & look properly anchored, & was still high enough to be covered by a short sleeve, should I ever need to hide it. She drew it on a piece of saran wrap & held it to my arm to prove the point. She was right.

It took about four hours. We talked about cooking & listened to country music. Paige let me watch until it was almost finished& then instructed me to turn away while she finished, particularly the eyes, which she’d saved for last.​"​ 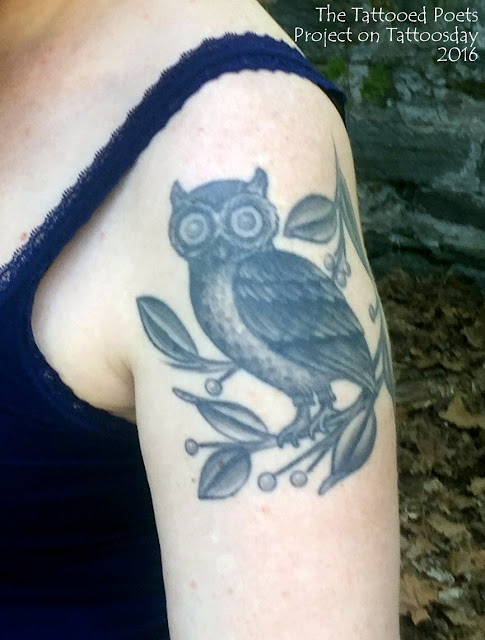 Jenn sent us the following poem, as well:

Jenn McCreary’s most recent full-length collection, & now my feet are maps, is available from Dusie Press; sections were adapted for stage with the playwright Kathy Vinogradoff for performances at Small Press Traffic’s Poets Theater in the East Bay, CA, & at the Asian Arts Initiative in Philadelphia. Other ​books include The Dark Mouth of Living (Horse Less Press), :ab ovo: (Dusie Press), a doctrine of signatures (Singing Horse Press), & Odyssey & Oracle (Least Weasel Press).


A 2013 Pew Fellow in the Arts for poetry, she lives in Philadelphia with her family where she edits ixnay press.

Thanks to Jenn for sharing her cool tattoo and poem with us here on Tattoosday's Tattooed Poets Project!

If you are reading this on another website other than Tattoosday, without attribution, please note that it has been copied without the author's permission and is in violation of copyright laws. Please feel free to visit http://tattoosday.blogspot.com and read our original content. Please let me know if you saw this elsewhere so I contact the webmaster of the offending site and advise them of this violation in their Terms of Use Agreement
Posted by Tattoosday at 6:42 AM