When we launched the month with Lee Sharkey's tattoo, I received an email from one of her fellow Maine poets, Richard Foerster, with the following picture attached: 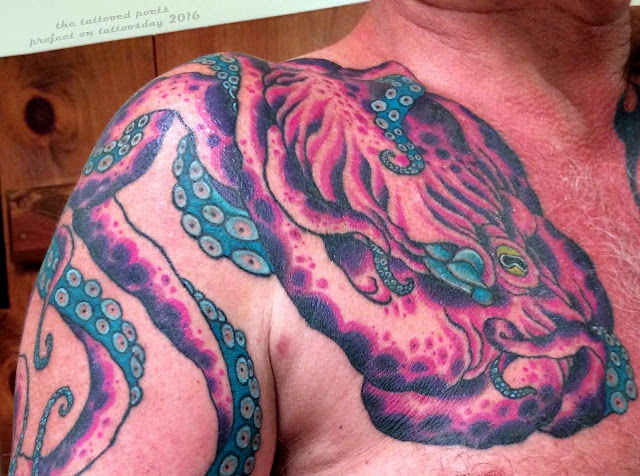 Well, you just don't send me a picture of an awesome tattoo and leave it at that, so I thanked him for the photo and formally invited him to participate in this year's offering of tattooed poets. And Richard was kind enough to oblige with the following explanation:


"Cephalopods have fascinated me since I first saw them in aquariums—how they can camouflage themselves by instantly changing color, how they can change shape to appear large and aggressive or to squeeze themselves down to hide in tight spaces, how they use jet propulsion and can zip away in a cloud of ink. And they are intelligent: I once read about an octopus in a tank at a research lab. The staff were puzzled by the nightly disappearance of fish from another tank across the room. So they set up video surveillance and were surprised to see the octopus lift the lid on its tank, crawl down and across the floor, then up into the fish tank where it enjoyed a midnight snack before crawling back to its own tank. There’s something admirable about that stealthy intelligence and cunning instinct to survive.

I’ve nine tattoos (thus far) and like to think of them as guardian totems. The octopus is one of my spirit animals. I worked with the very talented Jeremiah Loui (Instagram here) at Iron Works Tattoo in Portsmouth, NH  to design this upper chest and shoulder piece for my right side to counterbalance a large tribal moko on my left. We worked from photos I found on the Internet. My only stipulation was that the design be colorful, massive, realistic, and 'non-threatening.' Jeremiah achieved exactly what I had envisioned. The tattoo was completed in about 10 hours over the course of three sessions."

Richard also kindly shared the following poem, the subject of which he says will "probably" serve as a model for his next tattoo:

No planet could keep so many moons in tow.
They drift, constantly unconstellating
around you in their milky way. Even to want

to cradle one in your palm would compromise
their elegance: the opaque domes
are stippled with a compass rose and trail,

fixed since the first pulse of the world’s womb
on a source beyond orbits of perception. To swim
among them is to float as if in the pure We are

that scorched the oceans into life. Watch
how your mere expended breath, on its own
celestial path, must break into their midst.

The poem above appeared in The Burning of Troy (BOA Editions, 2006). Copyright © 2006 by Richard Foerster. Reprinted by permission of the author.

Richard Foerster was born in the Bronx, New York, and holds degrees in English literature from Fordham College and the University of Virginia. He is the author of seven poetry collections, most recently River Road (Texas Review Press, 2015). Foerster has been the recipient of numerous honors, including the “Discovery”/The Nation Award, Poetry magazine’s Bess Hokin Prize, a Maine Arts Commission Fellowship, the Amy Lowell Poetry Travelling Scholarship, and two National Endowment for the Arts Poetry Fellowships. Since the 1980s, his work has appeared widely in magazines and anthologies, including The Best American Poetry. He has worked as a lexicographer, educational writer, typesetter, teacher, and editor of the literary magazines Chelsea and Chautauqua Literary Journal. For the last 30 years, he has lived on the coast of southern Maine.

Visit his page on Amazon here.

Thanks to Richard for sharing his awesome tattoo and poem with us here on Tattoosday's Tattooed Poets Project!

If you are reading this on another website other than Tattoosday, without attribution, please note that it has been copied without the author's permission and is in violation of copyright laws. Please feel free to visit http://tattoosday.blogspot.com and read our original content. Please let me know if you saw this elsewhere so I contact the webmaster of the offending site and advise them of this violation in their Terms of Use Agreement.
Posted by Tattoosday at 3:00 AM