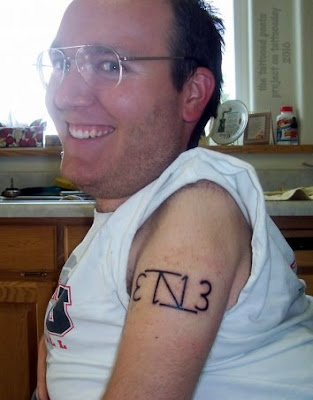 Travis explains that the TN13 tattoo "combines the T & N, moving off the final bar of the N into the 13." 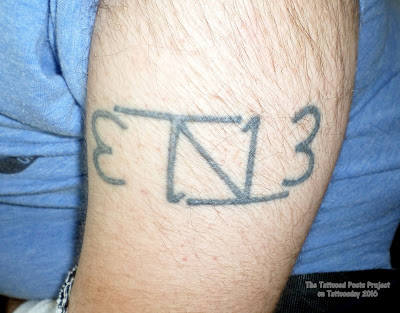 
"My dad's dad (Papa) used the TN arrangement as his cattle brand, and it just so happens that my initials are TN. I was born on a Friday the 13th, so if anyone has rights to having that number on their body, it is me! After reading Angels & Demons by Dan Brown, the prequel to The Da Vinci Code, I was struck with the way the Illuminati would write the same word legibly forward and up right as well as upside down and backwards at the same time [ambigrams]. This made me set to work during the more boring college classes I took at designing my tattoo. Gary Brandon at Body Language Tattoo in Cheney, WA put the design on me exactly as I requested, and it has brought lots of commentary since being placed there!"


"On my other arm I had in place a heart with basketball on it, surrounded by the words 'tRUE LOVE'... 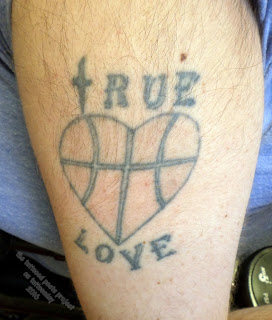 People assume a lot of things about a guy in a wheelchair (spinal muscular atrophy, a form of muscular dystrophy), that particular tattoo goes against several of those assumptions!"

Trying to describe an experience not felt firsthand is tough

Gently wiping away ink and blood
Shed as an intimate gesture

Touching her completely across the upper torso
Working masterfully while inflicting mixed doses of pleasure, pain
Closely holding her skin in new directions
Breathing across her
Adding to the intensity

A gift that will last a lifetime

The poem above is accompanied by a photo of the tattoo in question over at Empty Sink Publishing,

Travis Naught completed graduate coursework toward a Masters degree in sports psychology at Eastern Washington University and spent 10 years working with their men's basketball team before quitting his volunteer position to pursue writing full-time. Hus first book of poetry, The Virgin Journals, came out in 2012 and his first novel, Joyride, is being published by Black Rose Writing this summer! Please visit naughtapoet.blogspot.com for more information and to read more original work by Travis. You can also follow his work on Facebook here,

Thanks to Travis for sharing his tattoos and poem with us here on Tattoosday!

If you are reading this on another website other than Tattoosday, without attribution, please note that it has been copied without the author's permission and is in violation of copyright laws. Please feel free to visit http://tattoosday.blogspot.com and read our original content. Please let me know if you saw this elsewhere so I contact the webmaster of the offending site and advise them of this violation in their Terms of Use Agreement.
Posted by Tattoosday at 3:32 AM