If you've ever wondered how I find all of these wonderful tattooed poets, I must give credit to all the awesome un-inked wordsmiths who send contributors my way.

Case in point, at last fall's launch reading of The Best American Poetry 2015, I was speaking to several poets after the event, and Terrence Winch, one of the contributors, told me I should talk to Michael Lally, who had a tattoo dating back to the 1960's.

I reached out to Michael and he was happy to participate, as evidenced below: 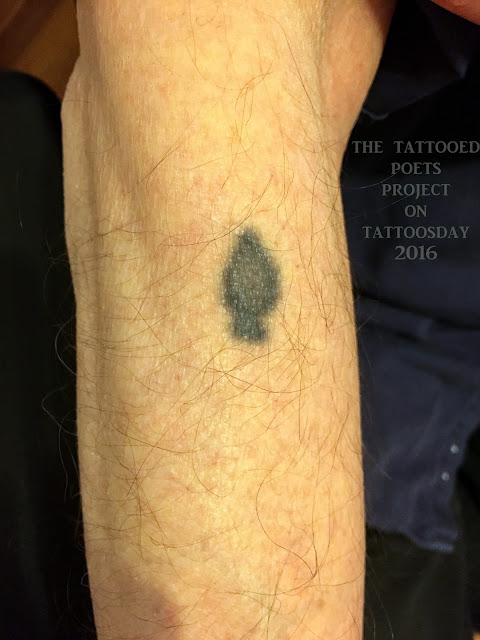 Okay, I know many readers may be thinking Michael's tattoo isn't going to win "best in show," but remember this month is all about tattooed poets, so let's check out Michael's poems about this tattoo:

One drunken night I got a tattoo of a spade,
symbolizing my rejection of the white world.
I wanted it between my pointer and thumb but
since I was underage the tattoo guy said Not
above the neck or below the wrist. So it could
be hidden under a shirt. He put it on my right
forearm. When my brother the cop saw it he
told our folks I was in a new gang. When we
got a new sarge, young, my height and freckle
faced, a paddy cat like me but more powerfully
built, rumored to hold the Air Force boxing
title in his weight division, sitting on my foot
locker as he passed, I muttered He don’t look
so tough to me. He stopped and turned to me.

When he said Let’s see how tough you are kid
I did what I always did. Bowed my head and
charged, fists flying. Usually I pummeled a
guy’s gut while he battered the back of my
head and shoulders, rarely showing signs of a
fight no matter how badly I was beat. If he’d
been drinking he might even throw up, or quit
before he did. But he grabbed my shoulders and
kept me charging right into a wall. He said Put
up your open hands. Before I even saw his fists
move he was hammering my palms with combi-
nations. In seconds they were swollen. He threw
an arm around my neck and said I like you kid,
you got balls, don’t give me any trouble. I didn’t.

Michael said he got this spade "in a tattoo parlor in Rantoul, Illinois" when he was 18.

He also sent this photo of his son's tattoo: 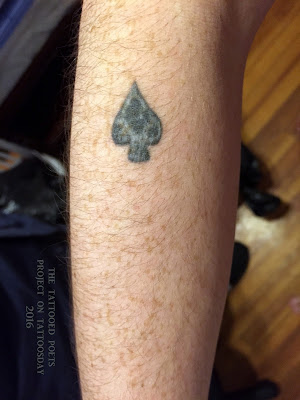 Michael told me, "my youngest son talked me into letting him get the same tattoo when he was 15, saying I’m old (70 at the time) and have had some health scares so he wanted me to be there when he got it to see that he was permanently marking himself with a look-a-like tattoo as a tribute to his father."

Michael Lally's first book, What Withers, was published in 1970 and his twenty-eighth, Swing Theory, in 2015. Among his awards and honors are the 92nd St. Y Poetry Center’s “Discovery Award” for The South Orange Sonnets, two National Endowment for the Arts Poetry Awards, the 1997 PEN Oakland Josephine Miles Award for Excellence in Literature for Can't Be Wrong, and the
2000 American Book Award for It’s Not Nostalgia. Incidentally, one of his NEA awards, for his poem "My Life," was notoriously cited in Congress, in a 1981 right-wing attempt to eliminate the NEA, as evidence of the government rewarding “pornography.”

It's an honor to have Michael Lally among the ranks of Tattoosday's Tattooed Poets Project and I thank him for sharing his tattoo and poems with us here.

If you are reading this on another website other than Tattoosday, without attribution, please note that it has been copied without the author's permission and is in violation of copyright laws. Please feel free to visit http://tattoosday.blogspot.com and read our original content. Please let me know if you saw this elsewhere so I contact the webmaster of the offending site and advise them of this violation in their Terms of Use Agreement.
Posted by Tattoosday at 12:01 AM

Excellent---great to see these poems (and the tattoos).

honored to have my underwhelming ink (and my youngest's) on your great site Bill, thanks for asking and thanks Terence for connecting us...