Today's tattooed poet is Liz Purvis, who is sharing two tattoos that punctuate her arms: 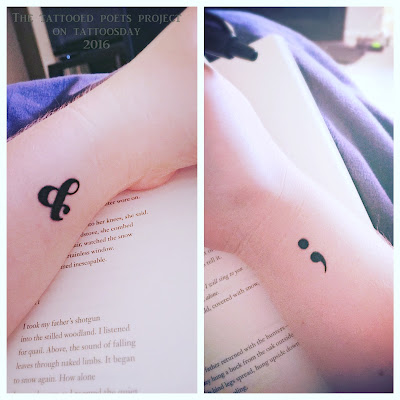 
"Chico at Hillsborough Street Tattoos [in Raleigh, NC] did both of these. Getting two small, but generally visible, tattoos was a bit of a birthday present to myself last year after a particularly rough patch. I love the shape of ampersands, and have recently started to use them in my work. Both symbols have ideas of continuity that I find compelling, and I like the daily reminders. The semi-colon is part of The Semi-Colon Project."

Liz shared the following "revised version of my poem 'Before the Movie,' which was previously published in cahoodaloodaling":


Before the Movie
after Marie Howe, for D.G.B.

My friend David & I are standing outside arguing
about film romances & storylines.
He says he believes there’s such a thing as soul-mates.

I twist my mouth up as I say, I don’t think so. It’s complicated;
we’re complicated; it’s foolish to think

there’s only one person you could spend the rest of your life with
without killing.

David says, Maybe it’s not just one. Maybe we’re trying to find them all,
trying to fit the jagged pieces of our insides to one another.

I tell David that sounds painful.
I ask, & what if you don’t meet them? Or
are you all destined to run into each other, bouncing off cities like pinballs?

We’re leaning back to rest against the cool brick of the building, taking turns
inhaling tar from the same cigarette, & I find myself
repeating what I said to my last love: love is choice, I used to say to him.

D.H. Lawrence says, I prefer my heart to be broken, & when I tell David this he laughs
until he’s coughing, says, That’s crazy.
I know, I say. That’s just exactly it.

Between David’s fingers, our cigarette has burned all the way down
to the filter. He stubs what’s left out on the brick, dotting the wall with ash.

The hall into the theater is cavernous, its vaulted ceiling
covered in mirrored panels staring back at us.

Liz Purvis is an MFA candidate in Poetry at NC State. Her work has been published in Deep South Magazine, Damselfly Press, and Colonnades, among others. She has work forthcoming in Zeit|Haus. In 2015, her poem “Before the Movie” was nominated for Independent Best American Poetry by Cahoodaloodaling. She can be reached at liz.purvis.writer@gmail.com.

Thanks to Liz for sharing her lovely tattoos and poem with us here on Tattoosday's Tattooed Poets Project!

If you are seeing this on another website other than Tattoosday, without attribution, please note that it has been copied without the author's permission and is in violation of copyright laws. Please feel free to visit http://tattoosday.blogspot.com and read our original content. Please let me know if you saw this elsewhere so I contact the webmaster of the offending site and advise them of this violation in their Terms of Use Agreement.
Posted by Tattoosday at 6:35 AM