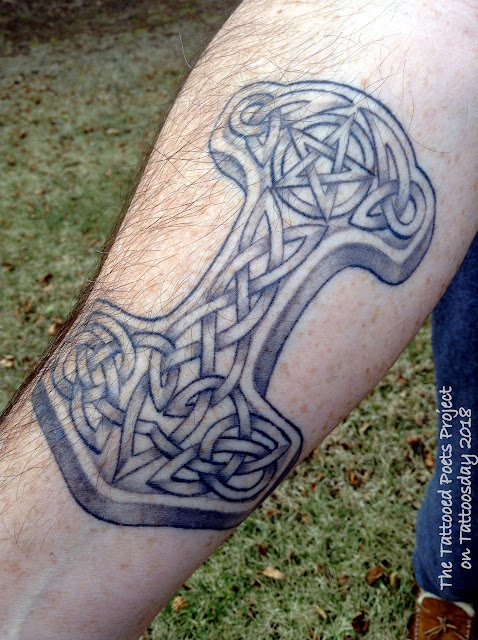 
I’ve been a Wiccan and pagan since I was a teenager. Because my bloodlines are Irish, Scots, English, and German, I’ve taken more and more of an interest in the Celtic and Norse gods and goddesses as I’ve aged. In 2003 I sat in on a graduate class at Virginia Tech, a course that focused on Celtic and Norse literature, and I got to read The Elder Edda, The Prose Edda, and a bunch of Icelandic sagas. These readings became the inspiration for my third book of poetry, Ash: Poems from Norse Mythology.

The hammer-wielding thunder god Thor is my favorite Norse deity. I admire his warrior manliness, his earthiness, his strength, and his determination to protect those he cares for. I showed several Thor’s-hammer images to my tattoo artist, Shaun Carroll (@shaun.hotrodtat2) at Hot Rod Tattoo in Blacksburg, Virginia, and he came up with the design, complete with Celtic knots and Wiccan pentagram.

Jeff shared the following poem, as well, which originally appeared in Chelsea Station and in his collection A Romantic Mann:


Commemorates all women and men
ever oppressed and persecuted
because of their homosexuality.


Pink triangles of granite.
Three of them, interlocked,
jutting out into the busy waters


of Keizersgracht.  A smooth
stone shelf we step onto
gingerly, as if it were an edge


of rosy ice that might break loose
and floe us off to sea.  About our feet,
white wreaths of lilies, peony-


scatter, wilting commemorations
like those rose bouquets tenderly
laid about the statue of Anne Frank


of wax long cooled.  (Semen’s
molten moonstone sealing together
the bellies of lucky lovers, tears freezing
a widower’s beard.)   In a safety
born of sheer coincidence, on this pink
promontory flanked by the canal’s


wake and flux, we touch history’s
spilled tallow, calla lily memories
not our own: the lesbian stoned to death


in the public square, the faggot-
pyre heaped about the sodomite,
ashes shoveled from the cooling


furnaces of Buchenwald.
Those deaths become our whetstone.
Upon this pink granite prow sword-sharp
and sheer as honed will,
we sit together, knee to knee,
in the Dutch sun’s imprimatur,


dipping frites into mayonnaise,
feeding each another.
Perfect photo opportunity for those


in tour boats who float by.  They listen to
the story of the Homomonument, point us out—
living examples!—aim their cameras, smile.

Jeff Mann grew up in Covington, Virginia, and Hinton, West Virginia, receiving degrees in English and forestry from West Virginia University. His poetry, fiction, and essays have appeared in many publications, including Arts and Letters, Prairie Schooner, Shenandoah, Willow Springs, The Gay and Lesbian Review Worldwide, Crab Orchard Review, and Appalachian Heritage. He has published three award-winning poetry chapbooks, Bliss, Mountain Fireflies, and Flint Shards from Sussex; five full-length books of poetry, Bones Washed with Wine, On the Tongue, Ash: Poems from Norse Mythology, A Romantic Mann, and Rebels; two collections of personal essays, Edge: Travels of an Appalachian Leather Bear and Binding the God: Ursine Essays from the Mountain South; three novellas, Devoured, included in Masters of Midnight: Erotic Tales of the Vampire, Camp Allegheny, included in History’s Passion: Stories of Sex Before Stonewall, and The Saga of Einar and Gisli, included in On the Run: Tales of Gay Pursuit and Passion; six novels, Cub, Country, Insatiable, Fog: A Novel of Desire and Reprisal (which won the Pauline Réage Novel Award), Purgatory: A Novel of the Civil War (which won a Rainbow Award), and Salvation: A Novel of the Civil War (which won both the Pauline Réage Novel Award and a Lambda Literary Award); a book of poetry and memoir, Loving Mountains, Loving Men; and three volumes of short fiction, Desire and Devour: Stories of Blood and Sweat, Consent: Bondage Tales, and A History of Barbed Wire (which won a Lambda Literary Award). In 2013, he was inducted into the Saints and Sinners Literary Festival Hall of Fame. He teaches creative writing at Virginia Tech in Blacksburg, Virginia.

Thanks to Jeff for sharing his tattoo and poem with us here on Tattoosday's Tattooed Poets Project!

If you are reading this on another website other than Tattoosday, without attribution, please note that it has been copied without the author's permission and is in violation of copyright laws. Please feel free to visit http://tattoosday.net and read our original content. Please let me know if you saw this elsewhere so I contact the webmaster of the offending site and advise them of this violation in their Terms of Use Agreement.
Posted by Tattoosday at 2:04 AM