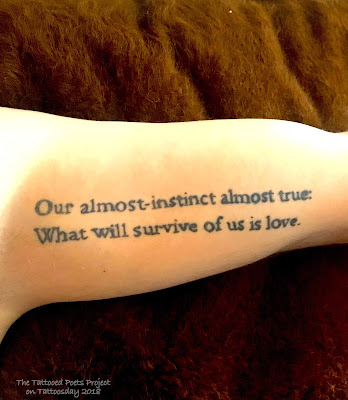 J.P. elaborates on the tattoo, which reads "Our almost-instinct almost true:/What will survive of us is love":

Recently, I read a beautiful little scrap from Rebecca Solnit: 'The self is also a creation, the principal work of your life, the crafting of which makes everyone an artist. This unfinished work of becoming ends only when you do, if then, and the consequences live on' (italics, mine; from The Faraway Nearby). This is wildly out of context, but it holds up just the same, to my ear. The most important phrase in there: 'if then.'

There's the old thinking on tattoos—the permanence, the body-as-canvas, the self-expression.

There's the old thinking on tattoos—the symbology, the beautiful reversion to atavistic modes of communication: pictographs, etc., where image, meaning, & sound are inexorably bound, are undivorceable from one another.

There's the old thinking on tattoos—something visible, something totemic, something to reflect the inner-self. (All reflection: distortion.)

The old thinking is good enough. But put in context, wildly so, vis-à-vis Solnit's case, it doesn't hold up as well to my ear. Or, at least, it's not the whole picture. Every/one: an artist—agreed. Every/body's magnum opus: the self—agreed. So the act of tattooing, to my mind, is the act of self-forging (self-forgoing?). They don't conflate, they don't co-exist, they collapse, together. Both. The skin is both canvas and paint, or so the metaphor goes.

Go listen to Kelly McFarling's "Both." It will help you understand me.

What I'm trying to get at, however obliquely, is this: neither a tattoo nor a poem is expression. They're experience. They're temporal & atemporal, all at once—they happen in time, but don't live in time. Sounds a bit like Memory, eh? Like Love, almost?

Which is all to say: the tattoo I have now is not the one I got Spring of 2015. It's neither the same to me, nor the same in appearance. When I got it, I remember Jesse saying, with that flair of wily gratitude, Come back any time, he said, touch ups for free. Any time, touch, free.

But I want the ink-object, the poem-object, like the self, to be of-&-for entropy, to be its own recreation, daily. Let the edges fray; let it bleed.

The homespun-piece referenced in the poem, that's long gone, just a few little scars now, layered under the one pictured.

The lines themselves come from Larkin's 'An Arundel Tomb.' The most important phrase in there isn't 'love.' It isn't 'what will survive of us.' It isn't 'true.' There is no finitude to the self—to its gulfs, slash-piles, glaciers, xeric crags, tectonic fissures. We are human-animals. We are reason-beasts. We are hybridity incarnate & as such, if/then, the only phrase that can really matter is: 'almost-instinct almost.' & That—that is the experience of Negative Capability. Isn't Love always a consequence, always?

He also shared the following poem:

THIRD DATE
for Maggie
Remember how we lay, naked, the usual silt
of hardwood floors clinging to our elbows,
our hips? You dipped the needle, dragged
St. Augustine’s symbol for non-linear time


(your idea) into my arm. Didn’t I try to be stoic


for you?—I feel no pain; I feel nothing. I admit,
I was sure once that love meant being jealous
of oneself. I admit it. I wanted to clutch
that instinct for recklessness, to own it & forever,
& I wanted you to hold me the way skin holds
an iron splinter. Remember the perfect sphere
of my blood, balanced on the needle’s tip?


How you licked it clean, returned it to pure
gleaming, without so much as a second thought?
I keep coming back, you said, back to this shape.

A current Wallace Stegner Fellow, J.P. Grasser is a PhD candidate in Literature & Creative Writing at the University of Utah, where he serves as Editor-in-Chief for Quarterly West.

Thanks to J.P. for sharing his tattoo and poem with us here on the Tattooed Poets Project on Tattoosday!


If you are reading this on another website other than Tattoosday, without attribution, please note that it has been copied without the author's permission and is in violation of copyright laws. Please feel free to visit http://tattoosday.net and read our original content. Please let me know if you saw this elsewhere so I contact the webmaster of the offending site and advise them of this violation in their Terms of Use Agreement.
Posted by Tattoosday at 2:29 AM