Our final Tattooed Poet for National Poetry Month is Rita Banerjee, who sent us the following photo of her tattoo: 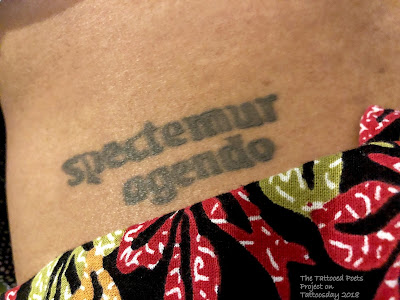 Rita explains how she came by this tattoo:


"By my senior year of college, I had been tapped into a secret society. When dusk fell over New Brunswick, we wore our dark robes long, accompanied by tawny-colored hats, as we tagged skulls and messages on the sidewalks across Rutgers College. Our secret society, which had been modeled after Skull and Bones and Quill and Dagger, had existed in our quiet but peculiar corner of New Jersey for over a hundred years. Paul Robeson, Ozzie Nelson, Al Aronowitz, Dick Standish, and Rebecca Quick were all members. We let our black robes and anonymity guide us. We wore our mystique close to the vest. Only a handful of deans and administrators kept the roster of our names. And so, in senior year, we easily flitted between the worlds of academic and cultural excellence and our shadow selves. But in May, during our graduation ceremony, our identities would officially be revealed to our fellow classmates and graduating seniors. So before we left the banks of the Old Raritan, broke our clay pipes, and signed our names inside the bell tower of Old Queens, we decided to take up one last dare. One evening, between finals and graduation, we took a trip to Montclair at night. I was the designated driver, and I was in charge of transporting my fellow skulls to a rather funky tattoo parlor in town. I was only there to hold hands and offer encouragement. Just half of us were willing to take the plunge and get a tattoo after all. But before the night was over, I, too, had been persuaded. While other members of our secret society got skulls emblazoned on their biceps and buttocks, I got the words 'Spectemur Agendo' inscribed on my lower back. The phrase was from Ovid, from The Metamorphoses. In Book VIII of The Metamorphoses, Ajax the fearless, exclaims: 'Denique (quid verbis opus est?) spectemur agendo!' That is, 'Finally (what is the use of words?), let us be judged by our actions!' A beautiful and terrifying sentiment. The perfect challenge for a writer: What is the power of words, dear poet? Let us be judged by our actions."

What a great story! In addition to that, Rita also shared, as is custom, a poem, as well:

xeroxing epiphanies at 5¢ a page, the messiah standing next to me has
been speaking the word of hope and rage for 37 years. with 4000 books
living in his mind, he’s international, a sage who hands me a song of
California. and anaheim—anaheim—been on my mind for seven straight
minutes. why? 7 for luck and anaheim for memories not mine. brushing
the tattoo of a carnivale, he says there isn’t a circus in the world he hasn’t
been to. and he’d like to be called Nesmith if you don’t mind. and when he
says Nesmith, i think of mike and white out. white out morning after
crash—seven days of meditating Tantric verse and I crashed, crashed for
six long hours at the highest level of understanding and do you
understand me, child, when I say, I cannot describe it to you? the
Supreme spoke to me and I had something to say. and this I’ve said for
years. and when his eyes ask, believe me, i do ’cause there isn’t a story i
haven’t believed in. and when i nod yes, he says, I have found in your
eyes a kindred spirit. and i think of the paper man i once met on an island.
in my back-pocket wallet, the name Yoshida’s inked, hand-pressed on
rice-white paper. Yoshida sighed once, look at the color of our
women—hair the color of the sun—there is no space for dark anymore.
just the shade of this paper store and the wait, the wait for a word-maker
to pass by. and so he tells me of Korea, the blasphemy of emperors
disgraced, and the beauty of his wife when she wakes him. we talk and
talk and talk of the greatness of rome, sartre, and curry. and somehow
beneath the talk, i can hear his heart. and tonight after kissing another
man of verse, i walk down white halls with a book of words on my head,
and think. today, i met a poet. 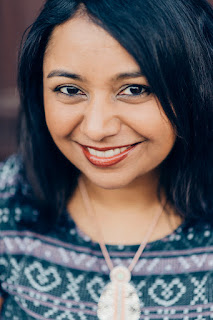 Rita Banerjee is the editor of CREDO: An Anthology of Manifestos and Sourcebook for Creative Writing (C&R Press, May 2018) and the author of the poetry collection Echo in Four Beats (Finishing Line Press, March 2018), which was a finalist for the Red Hen Press Benjamin Saltman Award, Three Mile Harbor Poetry Prize, and Aquarius Press / Willow Books Literature Award, the novella “A Night with Kali” in Approaching Footsteps (Spider Road Press, 2016), and the poetry chapbook Cracklers at Night (Finishing Line Press, 2010). She received her doctorate in Comparative Literature from Harvard and her MFA in Creative Writing from the University of Washington, and her writing appears in the Academy of American Poets, Poets & Writers, Nat. Brut., The Rumpus, The Scofield, Hyphen Magazine, Electric Literature, Painted Bride Quarterly, VIDA: Women in Literary Arts, Los Angeles Review of Books, and elsewhere. She is the Executive Creative Director of the Cambridge Writers’ Workshop and an Associate Scholar of Comparative Literature at Harvard University, and teaches on modernism, art-house film, and South Asian literary theory at the Ludwig Maximilian University of Munich in Germany. She is the judge for the 2017 Minerva Rising “Dare to Speak” Poetry Chapbook Contest, and she is currently working on a novel about a Tamil-Jewish American family in crisis during a post-authoritarian regime, a book on South Asian literary modernisms, a documentary film about race and intimacy in the United States and in France, and a collection of essays on race, sex, politics, and everything cool.

Thank you so much to Rita for sharing her tattoo and poem with us here on Tattoosday, as we wrap up our tenth installment of the Tattooed Poets Project!

Posted by Tattoosday at 6:48 AM