Our next tattooed poet is Melissa Fite Johnson.

She sent us the following photo collage: 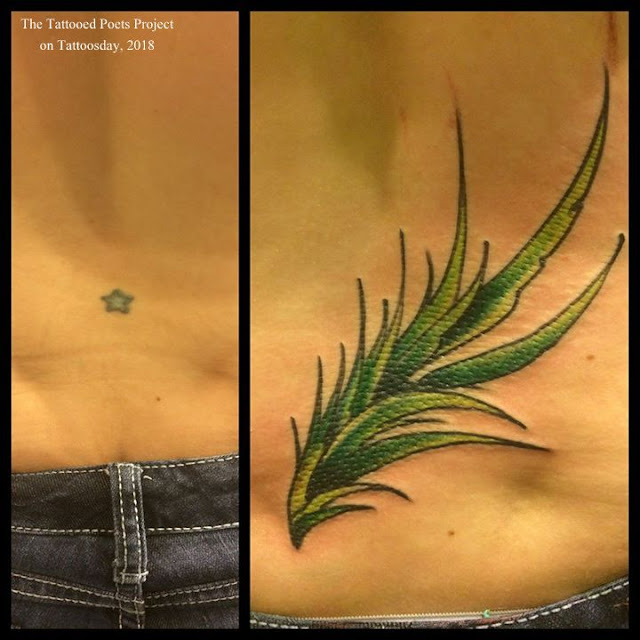 
"I had plenty of reasons to regret the tattoo I got at nineteen before the term tramp stamp entered our collective vocabulary. It was poorly done, it didn’t have any special meaning, and I’d gone with my not-very-nice then-boyfriend to get it. Actually, the reason I got it was because I was tired of being considered such a good girl, reliable and trustworthy and not wild at all, and somehow I thought a tattoo would prove otherwise. Of course, once I grew into a confident person, once I decided reliability and trustworthiness were excellent characteristics to possess, I especially hated my tattoo. It was a constant reminder that I didn’t used to like myself.

As much as I regretted my tattoo for other reasons, my embarrassment became palpable when lower-back tattoos started being referred to as tramp stamps. I wish I could say I’d been a stronger woman and not let that sexist term get to me, but it totally did. It was just so prevalent. So many people used it, even many other women with lower-back tattoos. It was a running joke on How I Met Your Mother, one of my favorite shows. Any time I went to a doctor who lifted my shirt to put a stethoscope to my back, or to a massage therapist who asked me to lie face-down on the table, I flushed with shame. I bought only one-piece bathing suits. I squatted rather than bent over to pick up anything I dropped. My tattoo felt like a dirty secret. I dreaded anyone seeing it and proclaiming, 'You have a tramp stamp?' which, despite my efforts, still happened.

It took more than a decade, but I finally stopped letting the term tramp stamp haunt me. Words like 'tramp' and 'slut' shouldn’t be used to describe any woman, no matter how many partners she’s had, no matter how she’s dressed, no matter where her tattoos are. No matter what. A major problem in our society is that so many people consider terms like tramp stamp (and the more recent skank flank) to be harmless, inoffensive. That’s simply not true. These terms have the power to humiliate women, as I can attest, and they contribute to rape culture. To reduce women to sexual objects, to dismiss their worth as human beings because of a tattoo, is a first step down a dangerous slippery slope.

My story has a happy ending. A few years ago, my husband and I visited friends in Columbus, Ohio. Our first night there, we got to talking about tattoos, and I mentioned how much I hated mine. One of our friends offered to contact a tattoo artist he knew, and suddenly our night’s plans changed. The artist, Joey Knuckles (@joeyknucklestattoo) at High Street Tattoo (@highstreettattoo), had a gorgeous portfolio and a reputation for exquisite cover-up work. I’d long ago decided what tattoo I should’ve gotten instead of a star-with-no-meaning, so (with an incredibly nervous belly), I asked for leaves of grass, in honor of my favorite book of poetry. I’m thrilled with the result. Now I have a beautiful tattoo with meaning, one I got surrounded by people I love and who love me."

In the fertility clinic waiting roomI’m the youngest by ten years,except for a toddlereveryone smiles at wistfully.He wears cowboy bootsand has a matching hat his motherwon’t let him put on indoors. He sayshe’s not a real cowboy without it.
Before my ultrasound,the boy’s mother says,All it takes is one good egg.My cousin, forty-one and beautiful,so skinny I can’t imagine herwith a curved silhouette by Christmas,doesn’t answer. Later,on the car ride home, she says,If he were my son,he could wear that hat to funerals.
~ ~ ~ 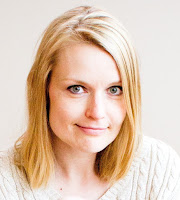 Melissa Fite Johnson received her Master’s in English literature from Pittsburg State University in Kansas. Individual poems have appeared in Rattle, Valparaiso Poetry Review, Broadsided Press, and elsewhere. Her first collection, While the Kettle’s On (Little Balkans Press, 2015), and her second, Ghost Sign (Spartan Press, 2016), which she co-authored, were both named Kansas Notable Books. She is also the author of A Crooked Door Cut into the Sky, winner of the 2017 Vella Chapbook Award (Paper Nautilus Press, 2018). Melissa and her husband live with their dog and chickens in Kansas, where she teaches English.

Thanks to Melissa for contributing to the Tattooed Poets Project on Tattoosday!

To see our entire list of poets over the last ten years, please visit www.tattooedpets.com.

This entry is ©2018 Tattoosday. The poem and tattoo are reprinted with the poet's permission.

If you are reading this on another website other than Tattoosday, without attribution, please note that it has been copied without the author's permission and is in violation of copyright laws. Please feel free to visit http://tattoosday.net and read our original content. Please let me know if you saw this elsewhere so I contact the webmaster of the offending site and advise them of this violation in their Terms of Use Agreement.
Posted by Tattoosday at 12:29 AM