Our next tattooed poet is Keith S. Wilson, who shares this interesting tattoo: 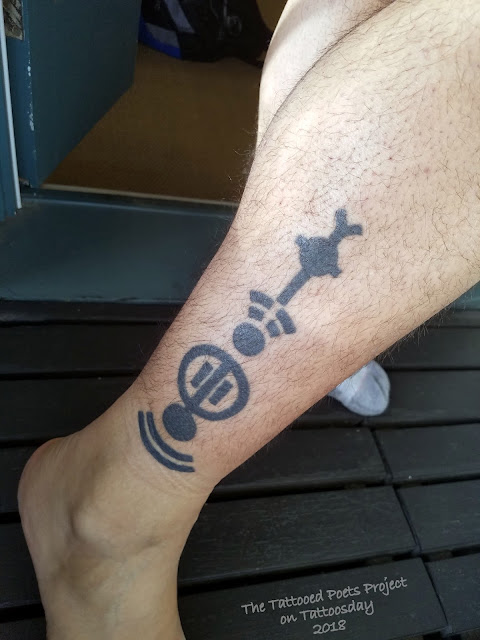 We'll let Keith explain the origins of these markings:


" I got a crop circle because it's awesome. But I also chose this tattoo because it represents a peculiar modern mythology that I've identified with in some capacity for most my life. Crop circles are associated with 'Greys' (the large-headed, big-eyed aliens you see in everything from Spencer’s Gift posters to the X-Files. Curiously, they are just as often portrayed as green-skinned as grey), and other images and ideas exist as well, all of which I love: UFOs, crop circles, cattle abduction, vivisection, tractor beams, ray guns, etc. The idea that aliens walk among us, communicating loudly but still never being seen is a feeling I’ve had since at least high school. It is based, I’m sure, on feeling literally alienated as a racially ambiguous, but not white, resident of Kentucky, in primarily white environments. We’re out there. Believe.

Sci-fi is a genre that, for me, vacillates wildly between three different modes: 1) writing openly about race/gender/sexual orientation/identity/etc., 2) writing accidentally about them, and 3) trying to write about them but failing. I love when it does it right, but I also love how it marries the future (science, advancement, hope) with the past and present (mythology, humanism). I write about all these things, to varying degrees.

Specifically, I chose the design because most crop circles occur in England and this one happened in America (which also may contribute to its unique figure, which is not 'circular' per se). If it means anything, it might portray a planet and satellite, but who, of course, can know with an image that appears suddenly in the night."

Keith also kindly offered up the following poem, which originally appeared in The Adroit Journal:


I Investigate Terraforming in My 30s

how a kiss may be alike
but isn't quite,

now a likeness. Or how this bandaged light
upends the bruise that became

the sky: I liked you, I like liked
you. And we held each other

as we made our child-
hoods hush; we strained

to merge like trees into a custom. We held
to each other’s hands

even when our notes
were misaligned. We would,

without half-trying, alight one upon the other.
What is gravity to our horns? We reached

and tore each other plain as walls
or erstwhile countries,

and the dream became a sun,
beneath me, the land, the fade

of wing,  my every instrument
a lyre’s vital music, my every simile, a flame.

Keith S. Wilson is an Affrilachian Poet, Cave Canem fellow, and graduate of the Callaloo Creative Writing Workshop. He has received three scholarships from Bread Loaf as well as scholarships from MacDowell, UCross, Millay Colony, and the Vermont Studio Center, among others. Keith serves as Assistant Poetry Editor at Four Way Review and Digital Media Editor at Obsidian Journal. Keith's first book, Fieldnotes on Ordinary Love, will be published by Copper Canyon in 2019.

Thanks to Keith for sharing his tattoo and poem with us here on Tattoosday, on the Tattooed Poets Project.

To see our entire list of poets over the last ten years, please visit www.tattooedpoets.com.

Posted by Tattoosday at 4:26 AM