Our next tattooed poet is Adam Tedesco, who shared these, "two of the many tattoos of skulls" that he has: 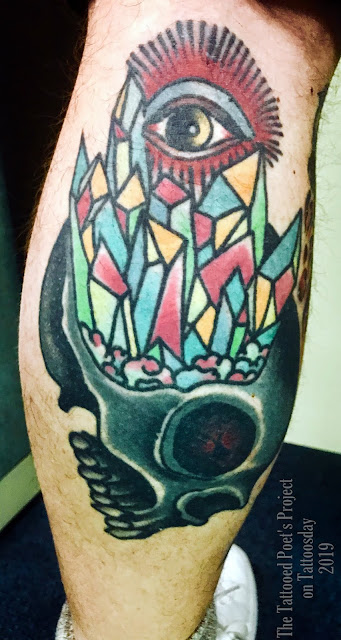 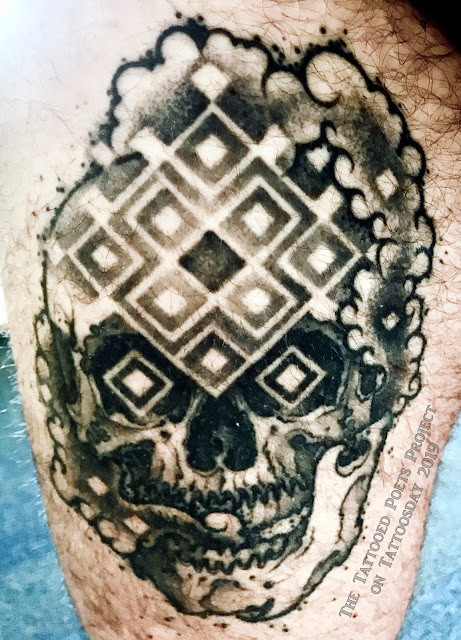 
The top image, on my left calf, is by Chad Koeplinger (@chadkoeplingertattoo). He tattooed me while doing a guest spot at Smith Street (@smithstreettattooparlour) in Brooklyn about five years ago. I was waiting outside the shop when they opened and still had to wait about 6 hours for him to get to me. I guess getting this tattoo was really important to me at the time, even though I had no image or design picked out. I had been a fan of Chad's work for a few years at that point and felt comfortable with him tattooing whatever he thought would look best in the spot I had picked out. When he asked what I wanted I just said 'I dunno, man. Something mystical?', to which he offered 'How about a skull with crystals and an eyeball.' 'Yup, that sounds mystical as fuck,' I replied.

Chad's a monster, in a good way. I'm a big guy, it's a big tattoo, and he finished in about 45 minutes. The knee ditch kills, which is good. Tattoos are supposed to hurt.

The bottom image, on the front of my right thigh, is by Nathan Kostechko (@nathan_kostechko). I got this when he was doing a guest spot at Thicker Than Water on the Lower East Side. I don't think that shop exists anymore. [Ed. Note - Three Kings Tattoo now occupies the space] I had some correspondence with Nathan before the appointment about the tattoo, which we came to agree is a skull exhaling DMT smoke. He told me he listened to Tool and smoked DMT to help him come up with the design, which I told him reminded me of the Spacemen 3 record Taking Drugs to Make Music to Take Drugs To. While I've been sober going on two years now, at the time this was a pretty good distillation of my lifestyle.

Adam sent us the following poem, as featured in his new collection Mary Oliver, available from Lithic Press, and originally published in MadHat Lit, which is now a Russian poker website.

AT THE MOUTH OF THE CAVE

Us pieces of shit, we’re magic
We turn everything we touch to shit Ain’t nothing better than that

We carried our rods and empties back to the van.
I watched the waterfall disappear between
the back window’s louvers and remembered a dream
I inherited from my next door neighbor, where every
surface is too soft, and every step dents the ground and
if you get caught leaving footprints they take you away to jail 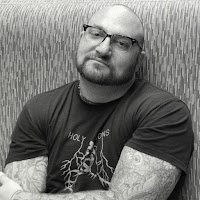 Born in Upstate New York, Poet and video artist Adam Tedesco is a founding editor of REALITY BEACH, a journal of new poetics. His video work has been screened at MoMA PS1, &Now: A Festival of Innovative Writing, No Nation Gallery, and the New Hampshire Poetry Festival, among other venues. His poetry, essays, and interviews have appeared or are forthcoming in Fanzine, Fence, Gramma, jubilat, Laurel Review, Powder Keg, Prelude, and elsewhere. He is the author of several chapbooks, most recently ABLAZA (Lithic Press, 2017), ISO 8601:2004 (Really Serious Literature, 2018), and Misrule (Ursus Americanus, 2019). His first full-length poetry collection, Mary Oliver, was published by Lithic Press in February of 2019. 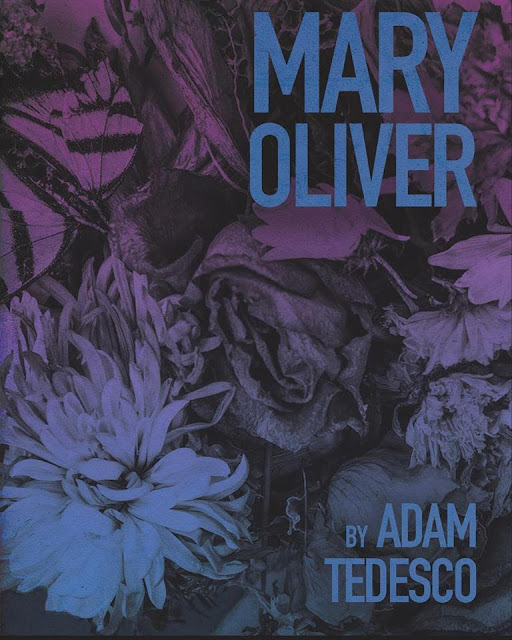 Posted by Tattoosday at 9:29 AM