Our next tattooed poet is Christopher Shipman, who shared two tattoos for Tuesday. First, this one: 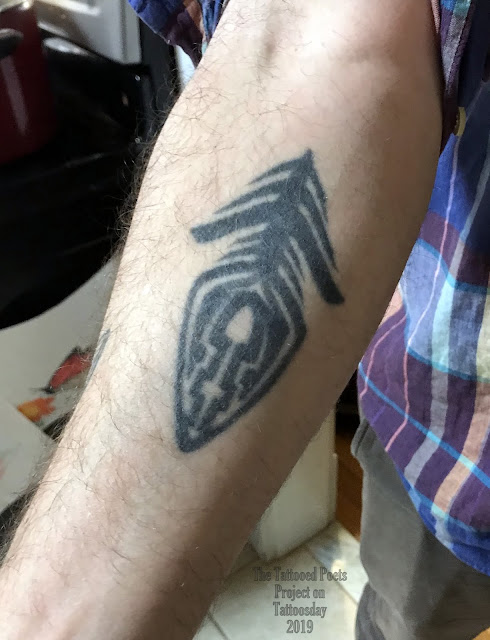 
"The smaller tattoo, which I refer to simply as Portrait, was my first. It was scarred
into my right forearm in Memphis, TN on January 5th, 2000, the day I turned 18. I
attribute to it the title Portrait because, when the artist asked what I wanted to get, I
said, 'Just look at me and draw something.' His immediate response was not
dissimilar to the look I get when I tell people how the tattoo came to be. It’s a look
equipped with squinty eyes. The squinty shape of eyes quickly dissipates, however,
when I add that the design was drawn on paper and okayed by me before the tattoo
gun ever began buzzing, a sound that I have come to find very satisfying over the
years. The artist was pleased that I didn’t expect him to freehand a design from
scratch directly into my flesh. Such an approach wouldn’t even be allowed at his
shop, I remember him mentioning. In short, I was pleased with the result of the first
draft and gave him the go ahead. Since then I have heard people ask all kinds of
questions about what the tattoo is, but my favorite is that is one of those radish-like
things that you use as weapons on Super Mario Bros. 2. Sometimes I say yes, it is."

Then, there is this tattoo:

"The bigger tattoo I refer to simply as Progression. I got the tattoo, which took three
sittings, in Jonesboro, AR in the spring of 2002. I got the idea for the tattoo after
watching 2001: A Space Odyssey for the first time. The movie really resonated with
me at the time, and still does, but the idea for the tattoo grew from a brief scene near
the beginning in which a tribe of hominids uses a bone to fight off a rival tribe. It
seems fairly clear that Kubrick meant this use to represent the first tool. After the
bone is used as a weapon a hominid throws it into the air and it eventually, spiraling
up and up, becomes a spacecraft, indicating that the plot jumps ahead in time
thousands of years. I was dumbstruck by the simple (even primitive), yet profound
statement about progression—one that affirms that everything we see around us
had to begin with a single tool. I just thought it was a notion worth reminding
myself of every day."

Christopher sent us this poem, as well:

after I’ve had
a certain kind of day

this specific sashay
of memory

not as if recollected
from a past life regression

more alive and well than that
more breathing now than that

for a gruesome operation
and this memory       sprung dancing

there is a strange woman
in the kitchen

I give her the typical    green-light-giggle

we both need
to hip-pivot past
our own      darkening eruptions

then she's off to find
the perfect sweater and skirt combo

as I am grateful

and look now  here she comes 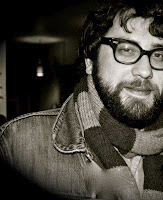 Most recently, Christopher Shipman is author of Keats is Not the Problem, co-authored with Brett Evans, and The Movie My Murderer Makes Season II. Shipman’s work appears in journals such as Cimarron Review, PANK, Plume, Salt Hill, So and So, Spork Press, and TENDERLOIN, among many others. His poem, "The Three-Year Crossing," was a winner of the 2015 Motionpoems Big Bridges prize, judged by Alice Quinn. A Ship on the Line (2015), co-authored with Vincent Cellucci, was a finalist for the Eric Hoffer Award. Shipman lives in Greensboro where he teaches literature at New Garden Friends School and dances to the Boss with his four-year-old daughter on his shoulders.

Thanks to Christopher for sharing his tattoos and poem with us here on the Tattooed Poets Project on Tattoosday!


This entry is ©2019 Tattoosday. The poem and tattoos are reprinted with the poet's permission.

If you are reading this on another website other than Tattoosday, without attribution, please note that it has been copied without the author's permission and is in violation of copyright laws. Please feel free to visit http://tattoosday.net and read our original content. Please let me know if you saw this elsewhere so I contact the webmaster of the offending site and advise them of this violation in their Terms of Use Agreement.
Posted by Tattoosday at 6:18 AM