Today's tattooed poet is Letisia Cruz, who shared this cool piece on her arm: 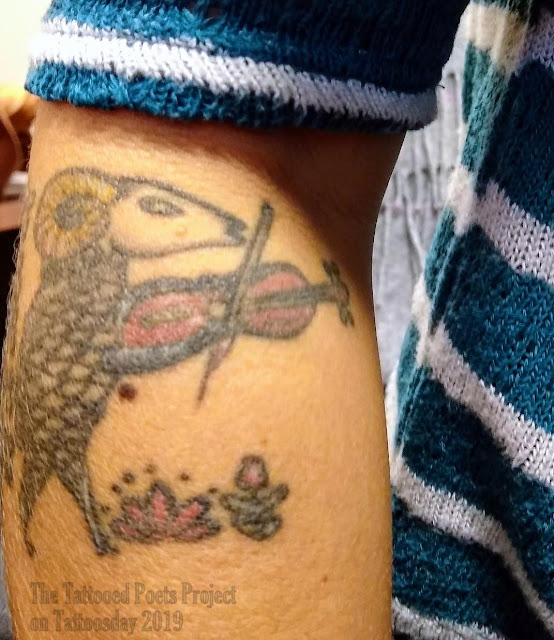 Letisia elaborated on how this little ram made it onto her canvas:


The little ram playing a violin on my arm was inspired by an illustration by Russian artist Yuri Vasnetsov. Although I did not realize it was Russian at the time, I have been inspired by Russian folk art since I was a child. I was introduced to Vasnetsov’s art by way of a book called ¡Chas Chas! Al Compas De Las Palmitas. I was drawn to Vasnetsov’s fantastic characters, including birds, foxes, and violin-playing rams, as well as his vivid landscapes. Vasnetsov’s world was one of vast possibilities where animals and humans coexisted, and magical trees inhabited the forest.

As a Cuban child born in el campo, I initially assumed the book was Cuban. You’d think the artist’s name might’ve been a dead giveaway, but I never gave it a second thought. I memorized all of the rhymes, so I could turn the pages and recite the words from memory long before I could read. I was five years old when my family left Cuba and the book, like so many things, was left behind.

Years later, while living in an apartment in Union City, New Jersey, my grandmother came to visit and brought with her three of my favorite books, including ¡Chas Chas! I was delighted to rediscover Vasnetsov’s artwork and was instantly transported back into his color-filled forests and exquisite landscapes. Of course, I eventually became curious about the book’s origin and learned that the original work was, in fact, Russian, as was most of the literature available on the island during the late 70s. ¡Chas Chas! was part of a small book collection that I treasured, all of which, unbeknownst to me as a child, were Russian.

The book was in poor condition and covered in tape when it reached me and remained that way for many years. I have since had it cleaned up and rebound, and it is one of the few possessions that I treasure. So many of our life-long passions are shaped in early childhood, and Yuri Vasnetsov’s world certainly became that for me and shaped much of my aesthetic. I have never visited Russia but hope to one day, as Russian folk art of the soviet era remains a powerful influence on me to this day.


Letisia sent us this short poem, as well, which was originally published in Ninth Letter here:

I lined her eyes
and held her wrists
still. I carved her neck long
so that when the rains came
she might hold it above
water. You will not drown,
I promised her. But then her
mouth and eyes filled and I
let them.

Letisia Cruz is a Cuban-American writer and artist. Her first book of graphic poetry titled The Lost Girls Book of Divination was published in April 2018 by Tolsun Books. Her chapbook Chonga Nation was selected as a finalist in the 2018 Digging Press Chapbook Series. Her writing and artwork have appeared in PANK Magazine, Ninth Letter, The Acentos Review, Gulf Stream, Moko Caribbean Arts and Letters, Ink Brick, Sakura Review, and The Writing Disorder, among others. She is a graduate of Fairleigh Dickinson University’s MFA program and currently lives on the west coast of Florida with her partner and two cats. Find more of her work at www.lesinfin.com.

Thanks to Letisia for sharing her lovely tattoo and poem with us here on Tattoosday's Tattooed Poets Project!

If you are reading this on another website other than Tattoosday, without attribution, please note that it has been copied without the author's permission and is in violation of copyright laws. Please feel free to visit http://tattoosday.net and read our original content. Please let me know if you saw this elsewhere so I contact the webmaster of the offending site and advise them of this violation in their Terms of Use Agreement.
Posted by Tattoosday at 6:00 AM