Our next tattooed poet is Rosemarie Dombrowski, who shared several of her tattoos, beginning with this stunning phoenix on her right leg:

Rosemarie elaborated on this piece:


"My connectedness to the phoenix is multi-faceted. When I was 14, I moved to Arizona after having suffered some trauma back in Missouri. Three months after arriving, my father died (back in Missouri). I had a son in my early twenties who was born with three congenital heart defects and later diagnosed with severe Autism. He’s nonverbal, but he’s also a pretty healthy 19-year- old now. In short, this city has re-birthed me and my son multiple times. And it keeps resurrecting so many of us. And then there’s Plath, rising from the ash 'and eating men like air.' Plath’s Phoenix represents the feminist in me. And the poet. And though I love this city dearly and was so ridiculously honored to become its first poet laureate, I already had the tattoo at that point. But it’s so fitting on so many levels now

Like all of my large artwork, this piece was done by Alex Empty (@alexempty), owner of Copper State Tattoo (@copperstatetattoo). It was outlined with a machine and filled using tebori, the Japanese hand-poke method."

Rosemarie also sent this collage of some additional pieces on her wrists and forearm: 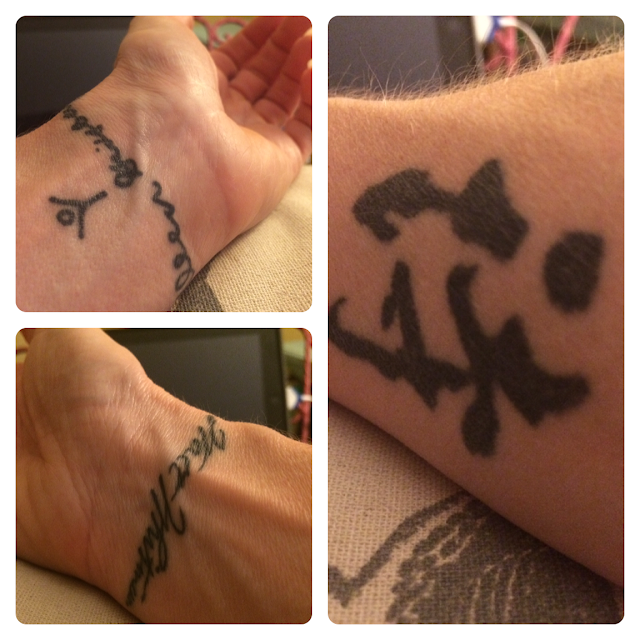 Pictured are tattoos of  Walt Whitman’s signature, Allen Ginsberg’s signature, and the kanji for
poetry (aka word temple). Rosemarie explained their origins:


"I’ve been an acolyte of Whitman for as long as I can remember. And at some point in grad school, I started to believe this ridiculous poetic narrative that I’d constructed—that Ginsberg was somehow my grandfather. I never really believed it, but I said it pretty often at readings. I still do. Because in some psychic way, I feel very connected to both of them. I fervently believe that it’s the responsibility of the poet to be the mouthpiece of his/her culture, to be a voice for the marginalized and disenfranchised, and to empower others to use poetry as a means of resistance, a source of agency and healing. I think Whitman and Ginsberg had similar notions of poetry and their socio-political role as poets.

The Japanese character for poetry is made up of word and temple. I’ve always said that I preach the gospel of poetry, that poetry is like a religion for me. It’s certainly a place of worship. It’s also the source of my spirituality. For me, poetry is the place where divinity resides, which is sort of an adulterated version of Transcendentalism, the 19th century American philosophy espoused by Whitman and based on the notion that divinity resides in all of us. Yogic philosophies are also rooted in this same belief, hence namaste, which means I recognize the divine in you. Sometimes I feel like a new age cliché. Regardless, I feel like I’m onto something.

Alex Empty did the Whitman signature and a guy at Gypsy Rose (@gypsyrosetattoos) did the Ginsberg. (I write about it in the poem below.) My kanji was also done by Alex using the tebori method."

The following flash/prose poem, Rosemarie tells us, "is about the time I went on a blind date to a local tattoo shop, Gypsy Rose, and got my Ginsberg tattoo." She notes, as well that, "Matt, the guy who I had the blind date with, is now my partner."

Lloyd the tattoo artist is talking about Hunter S. Thompson and Robin Williams, more so the
HBO documentary than the man, so I mention Hemingway and David Foster Wallace and the
confessionals without calling them by name, and I say something like they all had electroshock
therapy assuming that nobody will know exactly who I’m referring to, which is fine because
Lloyd wants to tell us a story that reminds me of a chapter of Jesus’ Son by the late Denis
Johnson, a part-time Phoenix resident and friend of a friend, and Lloyd’s yarn rivals Denis’,
which is almost unbelievable since Lloyd’s is basically about dropping acid and watching The
Wall, but it’s also about skating down 40th Avenue and staring at a golf course that he and his
friends eventually decide they need to cross because they need a lighter from the mini-mart on
the other side, and while they’re crossing it think they hear little girls laughing, and they think
they see suspicious men following them, and they start to think that maybe it’s “the set-up” that
their one friend keeps talking about. And maybe they get the lighter and maybe they don’t, but
by the end of the story, the golf course is covered in trash and time has stood still and Lloyd
realizes he’s had a lighter in his pocket all along. And this is when I realize that I’m standing in a
tattoo shop with a guy named Matt who’s brought me a book wrapped in basil leaves even
though it’s not my birthday and we’ve never met. And maybe I’m still high from last night or
maybe this is just surreal, but I suddenly notice the distance between us and I want to close the
gap, so I slide over to his chair and I almost lean in as he starts to lean back and it’s almost
something—like when he busses the table at dinner, or when I notice his mohawk in the sun, his
shirt buttoned to the collar as we walk to my car, the Fibonacci Sequence that he just had
tattooed on his left forearm. How I’m afraid to lean in the second time and the third. How the
gravel in the parking lot feels unstable. How humans seem too human to do anything but tell
stories.

Rosemarie Dombrowski is the inaugural Poet Laureate of Phoenix, AZ, the founding editor of
both rinky dink press and Write On, Downtown: A Journal of Phoenix Writing, as well as the
curator and host of the Phoenix Poetry Series and First Friday Poetry on Roosevelt Row. She is
the recipient of five Pushcart nominations, a 2017 Arts Hero Award, the 2017 Carrie McCray
Literary Award in Nonfiction, and a fellowship from the Lincoln Center for Applied Ethics. Her
collections include The Book of Emergencies (Five Oaks Press, 2014), The Philosophy of
Unclean Things (Finishing Line Press, 2017) and The Cleavage Planes of Southwest Minerals [A
Love Story], winner of the 2017 Split Rock Review chapbook competition. www.rdpoet.com

A hearty thanks to Rosemarie for sharing her wonderful tattoos and poetry with us here on the Tattooed Poets Project on Tattoosday!

If you are reading this on another website other than Tattoosday, without attribution, please note that it has been copied without the author's permission and is in violation of copyright laws. Please feel free to visit http://tattoosday.net and read our original content. Please let me know if you saw this elsewhere so I contact the webmaster of the offending site and advise them of this violation in their Terms of Use Agreement.
Posted by Tattoosday at 7:27 AM