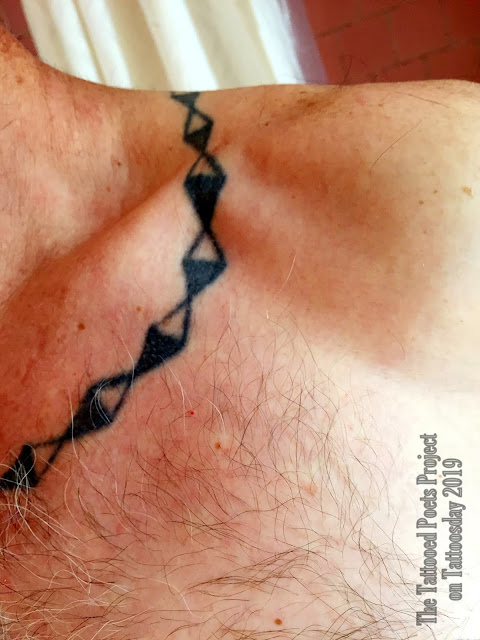 
"I spent 6 years in the Navy, but never got a tattoo until after I got out. For the necklace, I was inspired by the Mel Gibson/Anthony Hopkins version of Mutiny on the Bounty, and because a shipmate had been killed by a great white while we were in Diego Garcia (see the prose poem below). What better way to honor that by wearing shark's teeth as a talisman and spirit animal.

It was done by Bryn Taylor (@taylormadetattoo) in the back room of my old bookstore when tattooing was still illegal in Massachusetts. Bryn eventually moved to California, worked for Lyle Tuttle, and then opened his own shop in the Bay Area, Taylor Made Tattoo."

The Indian Ocean off Diego Garcia swallowed a shipmate. The coral glowed pink and yellow and came rushing up at him as he thrashed to reach the surface. So, this is it then. No more midwatches on a ship at sea. No more evenings back home, the smell of butane and beef raked through the air. Sharks told the sailor their secrets as the sea spread summer clouds of blood.

We got high and bet on coconut crabs sprinting across crushed coral roads. There was time enough for sonar and ships. I heard, someone said, that Great Whites won’t bite you when you’re drunk.

Michael McInnis served six years in the Navy chasing white whales and Soviet submarines. He founded The Primal Plunge, Boston’s original bookstore dedicated to ‘zines and underground culture. He is the author of two short collections, Hitchhiking Beatitudes, and Smokey of the Migraines, both published by Nixes Mate Books. His third book, Secret Histories, is forthcoming from Červená Barva Press.

Thanks to Michael for sharing his tattoo and poem with us here on the Tattooed Poets Project on Tattoosday!

If you are reading this on another website other than Tattoosday, without attribution, please note that it has been copied without the author's permission and is in violation of copyright laws. Please feel free to visit http://tattoosday.net and read our original content. Please let me know if you saw this elsewhere so I contact the webmaster of the offending site and advise them of this violation in their Terms of Use Agreement.
Posted by Tattoosday at 7:56 AM