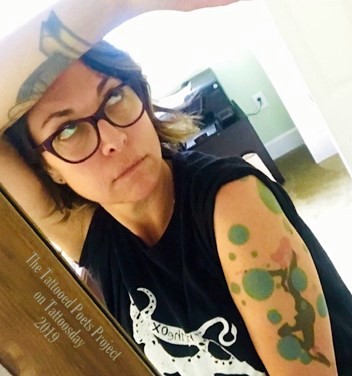 In the picture above, we can see two tattoos, both done by James Real at American Beauty Tattoo Parlor (@americanbeautytattoo) in Sunset Beach, CA.


"The piece on the arm above my head is a design by Angelique Houtkamp (@angeliquehoutkamp) of Amsterdam ( I got her permission to use the design), but James Real augmented it to put his and my own own stamp on it. Houtkamp’s style is vintage and many of her designs are an homage to old-school tattoo styles from the early 20th century. I selected the design because the face reminds me of Dorothy Parker, a hero of mine, so to make the design custom, we added a book beneath her owl body. Owls have traditionally represented wisdom.

The tattoo on my right arm is an image taken from a 1950s film festival poster. The original artist is René Gruau, a French-Italian artist who became famous for doing artwork for the Moulin Rouge and fashion sketches and artwork for fashion magazines, like Vogue and Harper’s Bazaar, and the couture houses in Paris, like Dior and Chanel. His work typically depicts women enjoying life, which is what initially attracted me to his work. I used to work in the wholesale fashion industry in downtown LA when I was going to college, which is where I was exposed to his work. I got the tattoo in 2004, the year he died."

Kathryn also sent us a poem from her chapbook called “Moon Travel”:

In zero gravity, a bra floats past a console of bleeps and bloops.
No one is wondering if NASA’s soap dries out the complexion, but
how do you change a tampon in a space suit?

38,000 miles away from Earth, the lunar pull is familiar.
A great, great, great grandmother of mine must have stared up
at the same moon from a prairie in Missouri 160 years ago.

I see her doubled over, clothespin in hand. Her face a grimace.
Sanitary belt pinching her waist, she digs a boot into the soil,
the Earth, straightens her back and then continues her work.

Linens collected, she pauses to breathe and, head tilted up
to the sky, there she sees the moon in day, white and full,
gazing back at her with sympathy, pulling her home.

That night, the cramps throb.  She turns and tosses in the moonlight
beaming in through her window, splayed over her abdomen, but once sleep comes,
she dreams of stars, the dusty surface of strange places, dark and open silence,
and laughing, naked women floating, spinning through a void.

Kathryn McMurray’s chapbook, If Your Body Is a Broken Landscape, was published by Picture Show Press in 2019. Her poetry has appeared in The Bastille, Pearl, Red Rock Review, Nerve Cowboy, and the anthologies V and Redshift 1. She earned her MFA from California State University, Long Beach in 2004. She resides in Long Beach, CA with her two sons and musician-educator partner.

Thanks to Kathryn for sharing her tattoos and poetry with us here on Tattoosday's Tattooed Poets Project!

If you are reading this on another website other than Tattoosday, without attribution, please note that it has been copied without the author's permission and is in violation of copyright laws. Please feel free to visit http://tattoosday.net and read our original content. Please let me know if you saw this elsewhere so I contact the webmaster of the offending site and advise them of this violation in their Terms of Use Agreement.
Posted by Tattoosday at 8:33 AM