Our next tattooed poet is Vincent Cellucci, who shared the following photo featuring several tattoos: 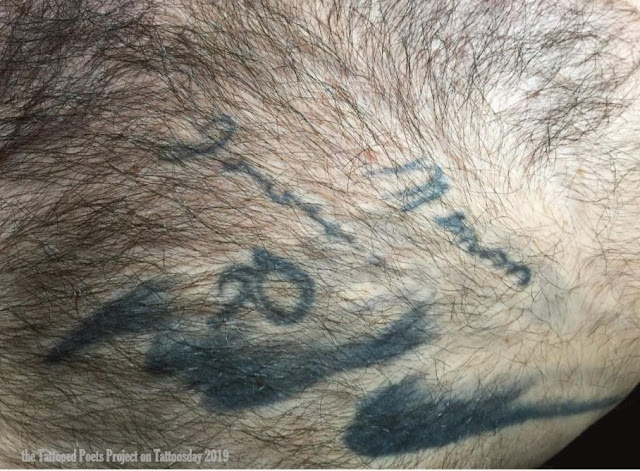 Vincent describes how these tattoos came to be:

"This chest piece began with the script 'P' over my heart, a memorial for my mother, Philomena, who died when I was young, so I knew I would never regret the tattoo. I got it when I was 17 on my first trip to New Orleans from a pretty sketchy parlor that used to be located across from Le Bon Temps Roule Bar, after drinking and dancing to Kermit Ruffins all night. My friend and fiction writer, Peyton Burgess got one with me; in fact, it was the first time we met.

The tattoo continued with the two signatures, one of my maternal grandmother, Jowena, and one of my paternal one, endeared Nemom. Both matrons of my family passed rather close together during the early rebuilding days of Katrina, while I was managing Theo's Pizza (one of the first places open after the storm) and pursuing my graduate school studies in poetry at LSU.

Nemom was an avid letter writer, world traveler, autodidact, polyglot, opera aficionado, and wise, little Italian grandmother—most of which she redefined herself as after raising a large family and being widowed. For a girl that worked at a sewing factory in the Bronx and never finished high school, she developed into a real Renaissance woman. She reminds me to never stop learning and pursuing new passions.

Nana Jowena corresponded with me frequently, but her profundity leans more towards vitality than letters. She embodied both strength and joy to me. This woman had a lonely and tragic life: losing two daughters, caring for her ill mother, and dealing with a bitter divorce to allude to just a few of the adversities she overcame. I never once heard the woman complain. Quite the opposite, she was the warmest, funniest entity you would ever meet. She was always strong. She never wallowed. In fact, she laughed constantly, never preventing herself form 'busting out.' She cooked daily too (with no money for groceries) and shared her food and joy with anyone that she interacted with, while confined to her small house in Philly: the mail people, the neighbors, the nuns that brought her communion. I strive to always maintain her disposition, the greatest of her many life lessons.

The large inked figure was done at Electric Ladyland (@electricladylandtattoo) on Frenchman St. I remember going with poet Christopher Shipman [appearing later this month on the Tattooed Poets Project!] as he was getting a memorial tattoo for his grandfather. Based off a detail of an oil painting of mine [see below], this mysterious gesture both resembles a bird and an angel.

The lore of the Cellucci family name is that it means 'little bird.' I also know these women are my guardian angels and I would not be, nor be the person that I am, without them. I had the idea that it would tie the family memorial chest piece together and the artist watered down the ink to try to get that faded, dry brush-like effect. He was a cool guy and up for the challenge to try adapting the painting to skin. Poetry is such a glorious space for ambiguity, multiple meanings, and imagination, so I wanted a gestural, figurative tattoo too.

This family memorial tattoo will never be finished as I'm sure it will only grow, unfortunately.

Vincent also sent us the following poem, from his newly-released Absence Like Sun, re-published with permission from Unlikely Stories and Lavender Ink:


send someone close   second to none


~ ~ ~
Vincent Cellucci wrote Absence Like Sun (Lavender Ink, 2019) and An Easy Place / To Die (CityLit Press, 2011). He edited Fuck Poems an exceptional anthology (Lavender Ink, 2012). He also has two collaborative titles: come back river (Finishing Line Press) and _a ship on the line (Unlikely Books), which was a finalist for the Eric Hoffer Award. Vincent performed Diamonds in Dystopia, an interactive poetry web app at SXSW in 2017, and the poem was anthologized in Best American Experimental Writing 2018.

Thanks to Vincent for sharing his poem and tattoos with us here on the Tattooed Poets Project on Tattoosday!


This entry is ©2019 Tattoosday. The poem and tattoo are reprinted with the poet's permission.


If you are reading this on another website other than Tattoosday, without attribution, please note that it has been copied without the author's permission and is in violation of copyright laws. Please feel free to visit http://tattoosday.net and read our original content. Please let me know if you saw this elsewhere so I contact the webmaster of the offending site and advise them of this violation in their Terms of Use Agreement.
Posted by Tattoosday at 6:32 AM