A Line from Wallace Stevens, Carved in Nomi Stone (The Tattooed Poets Project)

Check out her literary lower back tattoo: 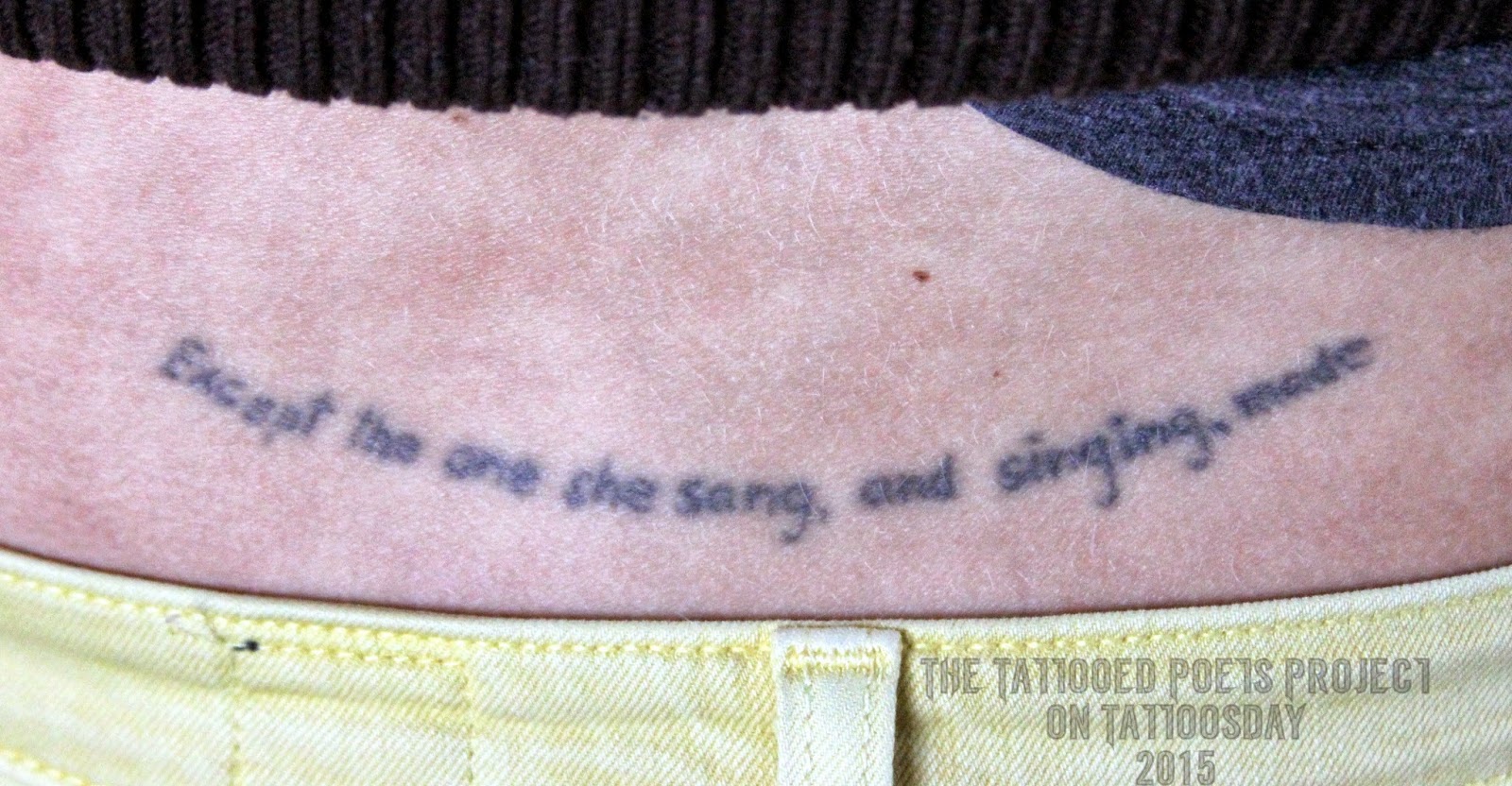 
"Thirteen years ago, in a hut in the woods of Lyme, New Hampshire — which I think I misremember as teetering on stilts — I had a line from 'The Idea of Order at Key West' tattooed on my back. I had just read Wallace Stevens for the first time, and I was in love. But my exuberance to be inscribed, this nighttime lyric adventure, somehow made me susceptible to imprecision: I had the comma in the line errantly inked into my skin. I had chosen a line from this snippet:

'As we beheld her striding there alone,Knew that there never was a world for herExcept the one she sang and, singing, made.'

But instead, of 'Except the one she sang and, singing, made,' my new tattoo read:

'Except the one she sang, and singing, made.'

Before we continue, I will say this: the poem was the right poem. Here was a figure for subjectivity, for creating: that one could make the very sea with one’s singing. But I was very ashamed of my comma-blunder, a register of my young carelessness on my body. In Stevens’ version, the singing was in perfect suspension, aerial between those two commas. My rendering, to the contrary, was flawed, earth-tethered: the girl stumbled. Still, I followed that girl. I have spent all the years in the interim following her while becoming an anthropologist: always blundering and stumbling to enlarge my own seeing. Here’s one of the poems I made along the way:"


The Etymology of “Alaasa” [علاسة] (“Wartime Snitching”), a Word Which Emerged on the Streets of Baghdad at the Height of the 2003 Iraq War.
In 2006, the word
choked alert,
began to feed.
The lexicons spoke
of its early
life: it meant to eat
most especially wheat
three grains to
a husk. Such good
quality but so difficult
to cleanse. It is a black
grain, and you will
consume it but only when
desperate. It came to
mean embroidery,
a nervous raising
of needles into cheek
of cloth, metaphorically
the clicking of talking
like an itch, a twitch: bad
mouthing, getting
told on; also theft
of words; theft of
whomever you said
you were; no, theft
of who you
were; the limit of
cash for which you
give away my
coordinates. Bet on
this debt; open the content
of your net. In it our
every spring night.
Nomi elaborates on the poem:


'The Etymology of Alaasa' just came out in Plume’s March issue. It came out of two years of fieldwork, interviewing Iraqis who had worked with the US military during the 2003 Iraq War. The poem is about war and words, and word’s haunted afterlives. In Philip Metres’ brilliant book, Sand Opera, in the section 'Hung Lyres,' the speaker’s daughter asks: 'Is that man crying or singing?' To write broken lyres in dark times."

Nomi Stone is the author of the poetry collection Stranger’s Notebook (TriQuarterly, 2008), an MFA Candidate in Poetry at Warren Wilson College, and a PhD Candidate in Cultural Anthropology at Columbia University. She earned a Masters in Modern Middle Eastern Studies from Oxford and was a Creative Writing Fulbright scholar in Tunisia. Her poems appear or are forthcoming in Guernica, Poetry Northwest, Plume, Drunken Boat, and elsewhere. She has received grants from the Vermont Studio Center and the DC Commission for the Arts and Humanities, and lived in Tunisia, Morocco, Egypt, and Jordan.

Thanks to Nomi for sharing her tattoo and poem with us here on Tattoosday and the Tattooed Poets Project!

If you are reading this on another web site other than Tattoosday, without attribution, please note that it has been copied without the author's permission and is in violation of copyright laws. Please feel free to visit http://tattoosday.blogspot.com and read our original content. Please let me know if you saw this elsewhere so I contact the webmaster of the offending site and advise them of this violation in their Terms of Use Agreement.
Posted by Tattoosday at 3:01 AM