Tina Schumann, today's tattooed poet, has a symbol on her back that many poets may recognize: 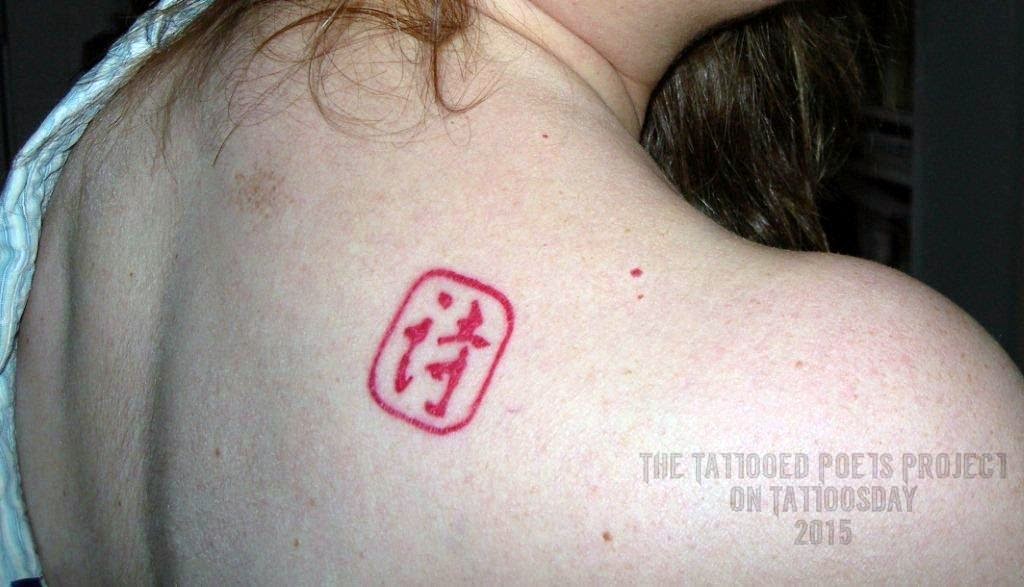 "At the age of 43 in 2009 I graduated with a MFA from the Rainier Writers Workshop at Pacific Lutheran University in Tacoma, WA. It had long been a dream of mine to attend grad school and truly focus my life on poetry. I had been a fan of Copper Canyon Press for many years and as part of my 'Outside Experience' required program component I was lucky enough to acquire an internship with them.

I then worked for CCP for another year in fundraising. So CCP is close to my heart in many ways. When I learned that the Chinese characters prevalent on all their books was the Chinese translation for poetry (literally 'Word Temple') I knew that tattoo would be the gift I gave myself upon graduation. A kind of reminder to myself of the power of poetry and the central role I wanted it to take in my life. Four of my cohorts and now life-long friends came with me on that day and also got tattoos. This was my second tattoo. The shop where we got the tattoos is now gone, but the memory and tattoo live on."

All afternoon we have been waiting
for snow the weatherman promised
at . Unreliable though he is
we plied the pantry with potatoes and bread,
milk and a chicken crouched in the freezer.
Now there is time for reverie
to take up larger swaths of the mind. Time
to survey the rooms, walk the floors,
confuse memory with memento, artifact
with fact – like a portrait
of some long dead family uncovered
in the attic; as silent as the grave, as unknowable
as the remnants scattered in their wake.
The man has perched a bowler on his knee, the rim
of the women’s petticoat frames the buttons
on a turned out shoe. What particulars
quantify them now? Here – in suburbia –
among the old houses made new, the mouth
of every garage tight-lipped, the amorphous
whistle from the train tracks and the occasional car
that guns it up the street. I’ve written this poem before;
the little soul encapsulated in her little hut.
I am learning to live again
with unstable elements; the ghostly motion
of a garden swing, the distant whirr
of wheels and engine, an ambulance blaring
across the valley floor. Here, in the pre-snow silence,
there is time to let slip the juxtaposition of now
and then, house and street, portrait and memory.
Nothing but time to wait
for the texture of twilight to appear
on the kitchen wall, a flutter of white
to float across the face of a window. Now
I will silence the radio, pull out the knife
by its tail and prepare to cleave flesh
from bone, question from action,
time from the stillness of relics.
__________________________

Tina Schumann’s manuscript As If (Parlor City Press) was awarded the 2010 Stephen Dunn Poetry Prize. Her full manuscript was named a finalist in the 2014 Four Way Books Intro Prize and the 2011 National Poetry Series. She is the recipient of the 2009 American Poet Prize and a Pushcart nominee. Schumann is the Assistant Director of Artsmith.org and editor of the forthcoming anthology, Two-Countries: U.S. Daughters and Sons of Immigrant Parents. She holds an MFA from Pacific Lutheran University and her poems have appeared in various publications including The American Poetry Journal, Ascent, Cimarron Review, Crab Creek Review, Midwest Quarterly, Nimrod, Palabra, Parabola, Poemeleon, Poetry International, San Pedro River Review, SubTerrain, Terrain.org, Raven Chronicles and the Yale Journal for Humanities in Medicine. You can read more about Tina's work at http://www.tinaschumann.com/

Thanks to Tina for sharing her tattoo with us here on the Tattooed Poets Project on Tattoosday!