Our next tattooed poet is Burt Kimmelman. Check it out: 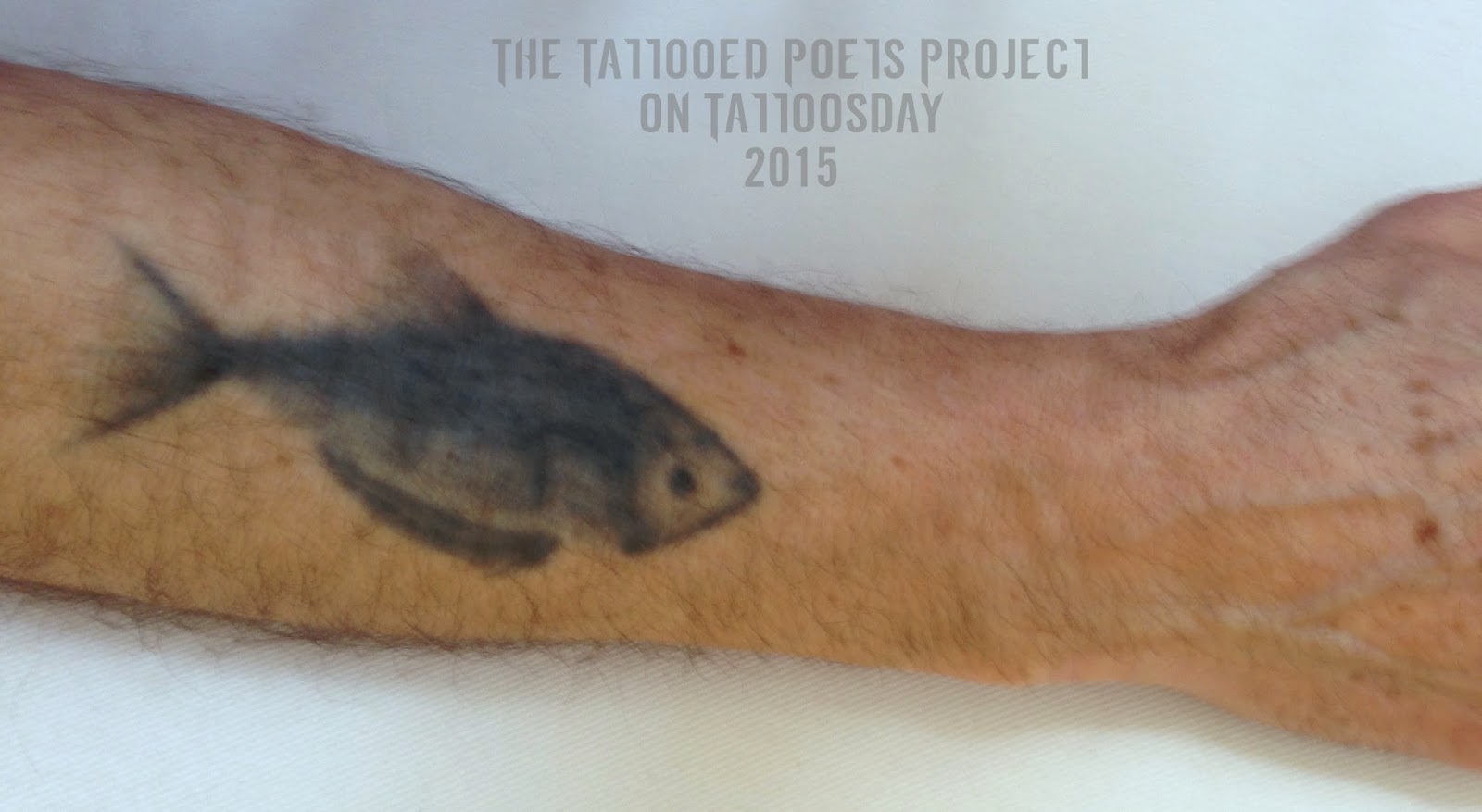 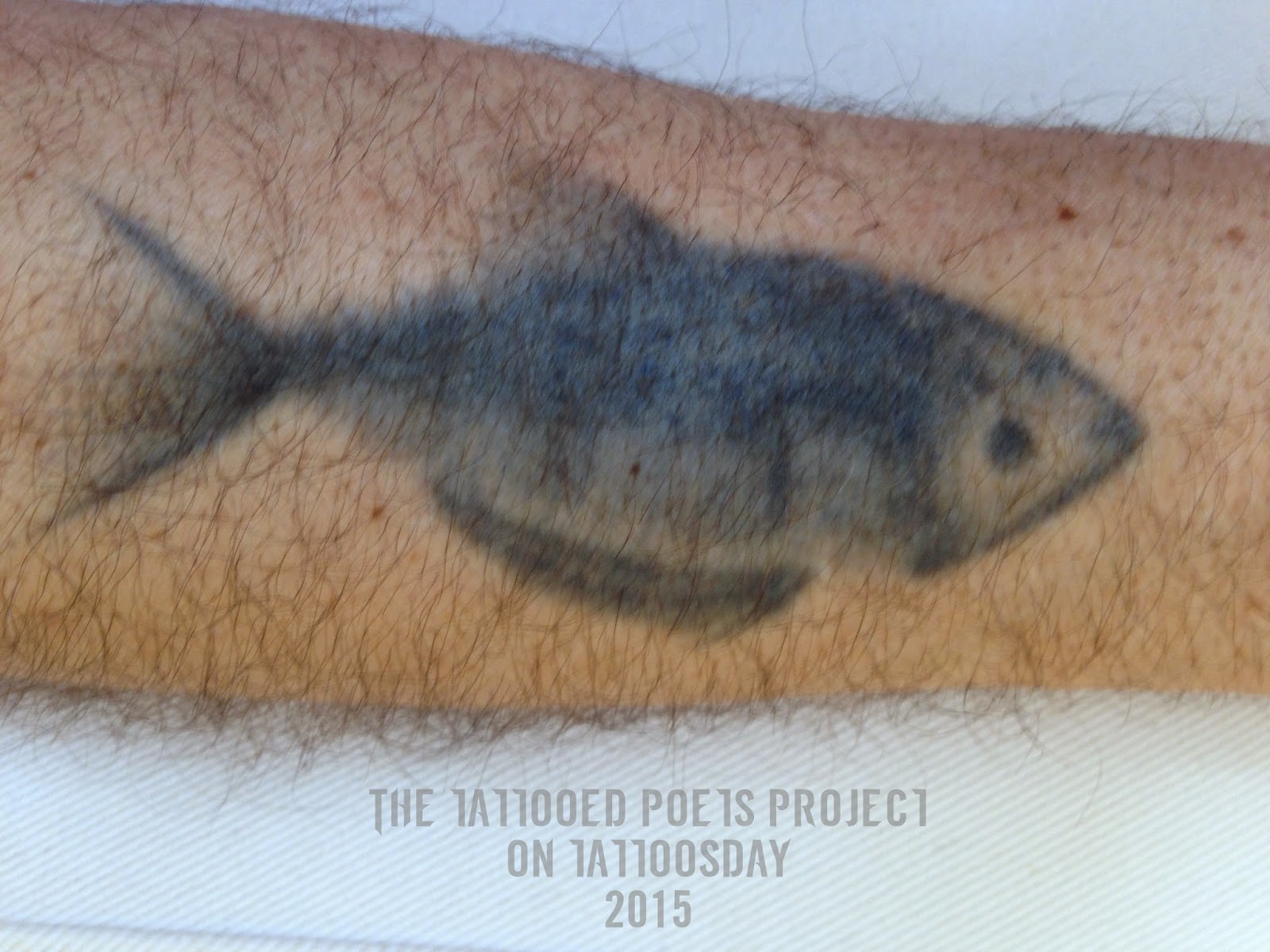 Burt tells us how this fish came to swim down his arm:


"I got the tattoo in early 1972, at Lyle Tuttle’s tattoo parlor in San Francisco—the only place in the entire city then to get a tattoo professionally done with a machine; it was located near the bus station.

I was sitting around with some other people smoking weed and drinking bourbon in our house out near Seal Rock. We were all very drunk when someone said, as a kind of announcement, let’s go get tattoos!

We piled into a very old (late forties?) Plymouth (I think) and drove to the tattoo parlor. The other guys (no women came with us—but a couple of weeks later I took an ex-girlfriend of mine who was visiting from NYC, where I was from, to get a lovely tattoo of a rose on her wrist) were lined up to get something each from the one tattoo artist who was working at the time; his name was Pat.

There were samples of tattoos on all the walls in the parlor, on paper pinned there—the usual sorts of things—and the people I was with were choosing from them. (One of us, the one who was driving, got his wife’s name put on his upper arm, while the rest of the group but for me were getting images like a red devil or a motorcycle with wings bursting out of a cloud, or something like that.) I didn’t like any of the images I saw.

Then I recalled Arthur Conan Doyle’s inaugural story of Sherlock Holmes and Dr. Watson, A Study in Scarlet. In it, Holmes looks out of his window and points to a man walking up the street below (who later appears at the apartment door for help). Watson, the foil, is taken aback and is highly skeptical of this new acquaintance. The man, Holmes claims, is a sailor just back from Shanghai. Eventually Holmes will explain to Watson that he knew that was who the man was because he had a rather new looking tattoo of pink fish bones on his forearm, and had a sunburn; apparently, when they docked in Shanghai, British sailors in the mid nineteenth century would get this one tattoo.

So I asked Pat for pink fish bones. He said he didn’t have pink, but how about blue? I said that that would be fine.

Pat was a real pro, and he tended to work very quickly. He shaved my forearm and rubbed on some alcohol and then set to work. Aside from the shock of the machine inflicting more pain on me than I had expected, I was mesmerized by the image he was creating. He drew the spine and then, very quickly, drew in the other bones, having put a head on; the very thin, fine lines of the bones radiating out from the spine were gorgeous in their delicacy. He drew in the tail fin and the lines there were almost as nice, but a bit stronger for a solid contrast, and to me were beautiful.

Then, without a pause, suddenly, he drew in a dorsal fin. I was appalled. What had he done? Whoever heard of fish bones, head and tail attached, with a dorsal fin as well? He had instantly made the fish skeleton come alive or at least whole with that back fin. I quickly demanded that he had in some way to fix this. He hadn't understood what I was trying for.

After a quick negotiation he shaded in most of the beautifully detailed work he had done, those bones coming out from the spine on either side. In this way he turned the skeleton into a quasi abstracted whole fish. The tiny hint of a smile in the fish's head had to be left as it was (he added that with a very quick flourish too.) I then, as a finale, asked him to put a red dot in the eye.

Over the years the dot has faded completely, but I'm happy with the way the blue lines have held up, now in late middle age and remembering back to my early adulthood."

Burt sent us the following poem:


The sunlight startles us awake,
loosens the ground whose shoots and buds -
their traces of red and blue — stand

against the odds. A squirrel makes
for her cache. The first woodpecker
rattles on, wrong yet beautiful —

no sense to the light, how we cleave
to its persistence. This morning
I also make for my cache of

papers, a pile of fallen leaves
on my desk, and instinctively
dig up this past autumn memo

from Jane: “cats birds dogs fish monkeys
whales dolphins.” Her hand suddenly
sure and bright — why, though, no snakes?

I praise all creatures, who as if
they had never known winter are
now, too soon, desperately alive.

(Copyright 2013 by Burt Kimmelman, from Gradually the World, BlazeVOX [books].)

Burt Kimmelman's eighth collection of poetry is Gradually the World: New and Selected Poems, 1983 – 2013 (BlazeVOX, 2013). In addition to poetry he has published a number of books and articles of literary criticism, and several memoir-essays. He is often interviewed; his work is frequently anthologized, has been the subject of reviews and essays, and featured on NPR's The Writer's Almanac. He teaches at New Jersey Institute of Technology in Newark. More information about him, and samples of his poetry and prose, can be found at BurtKimmelman.com.

Thanks to Burt for sharing his poem and tattoo with us here on Tattoosday's Tattooed Poets Project!