Our next tattooed poet is Vincent Francone. Vincent has two amazing tattoos on his upper arms: 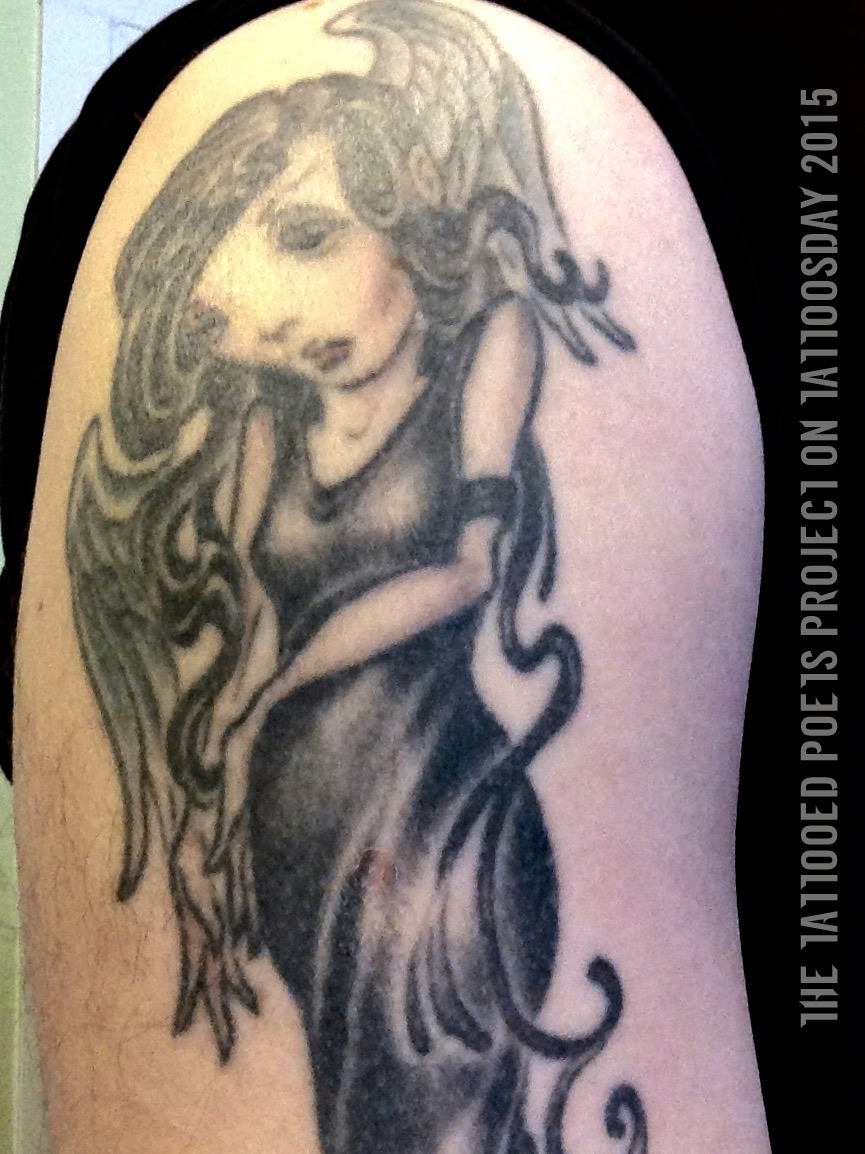 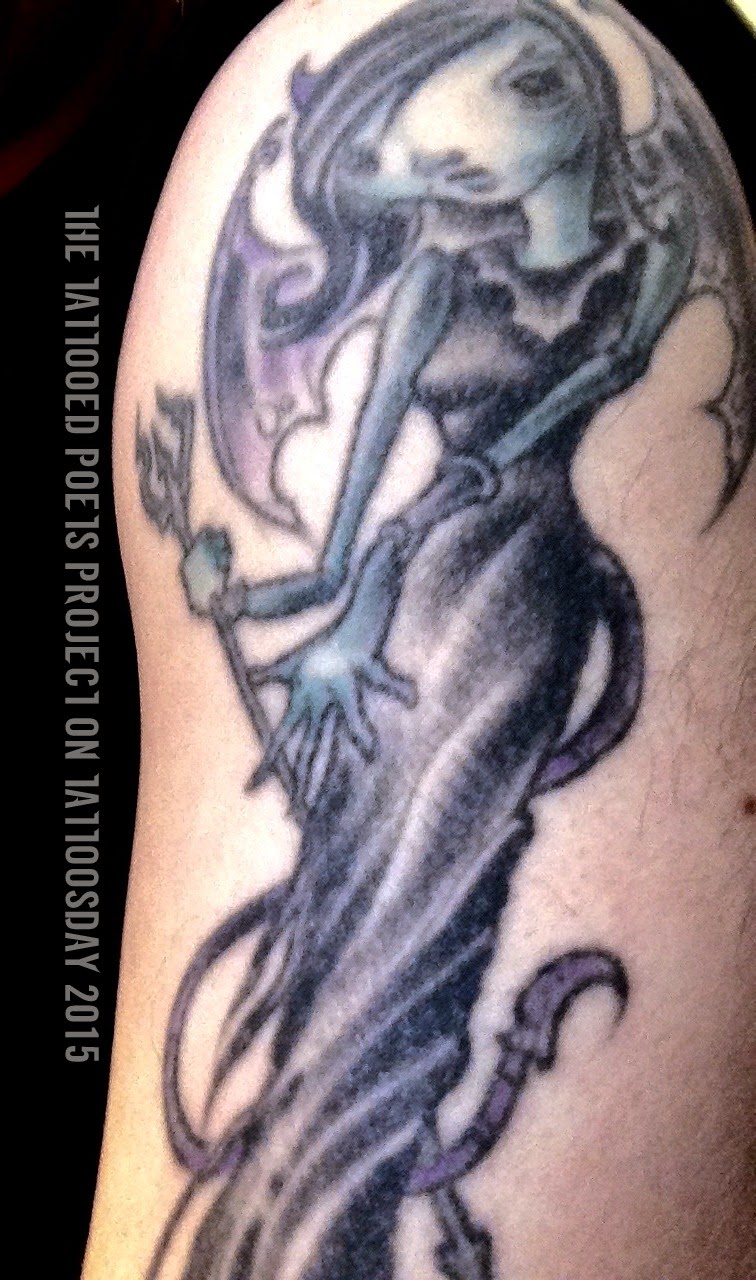 
"I got the angel tattoo first. It was meant to be a caricature of my (then) girlfriend (now my wife). A year later, I decided to get a demonic version. I was looking to create a theme-- the angel on one shoulder, the devil on the other. That sums up my life-- always fighting to decide what to do with two distinct voices in each ear pulling me in opposite directions. The shop for both was Deluxe Tattoo in Chicago. The artist was Tim Biedron."

Vincent sent us the following poem:

A True Account of Talking to the Sun in Chicago

The sun wouldn’t take my call
at first, so I insisted,
sent a friend request,
bombarded him with emails
until finally, out of frustration,
he relented.

“Francone, what is it?
What’s so goddamn important
you have bug me
while I’m working,
which, in case you didn’t realize,
is always?”

“Well…” I had nothing
to ask, I just wanted
to be in contact,
but the sun insisted:
“Let me guess,
you’re hoping to be

have invoked me in
their minor poems
and pretended to speak with me
so I no longer have much
to say to poets
minor or major.”

I was dejected,
as you can imagine,
but pressed regardless
like a stubborn dog:
“Couldn’t you
advise me anyway?”

“Sure,” he said:
“go and get your MFA.
It might be folly,
and a lot of cash
it’ll cost but it’s worthwhile
if you’re into writing balderdash.”

“I’ve tried,” I lied,
“but it was a drag,
more times than not
I wrote what my
professors wanted,
which was a lot of rot.”

“I’ve seen it,
your grad school verse,
and I’ve seen your others;
you could do a lot worse
than write what your
professors want.

But you could probably
do better, but
who cares?
Poems won’t change
either of us.
And there’s so damned many!

Who can read them all?
I used to keep up
but I’m tired—
too much being written, I’m
overwhelmed. Francone,
why add to the deluge?”

“Because,” I said,
“where else
but in a poem
would I get to use
the word deluge?”
He rolled his eyes,

said: “That’s the trouble
right there: when
in everyday conversation
would you use deluge?
Never—so why put it
in a poem?

To make your poem seem
like a poem?
That’s the cheapest
poet’s trick.
It only further
alienates the audience,

which is a small lot
to start with.
Better stick to straight
talk, nothing so
polysyllabic
and no tortured symbols!

Keep it direct,
keep it pure,
just say what you feel
and try to feel something
other than self-pity,
dull as all get out—

don’t bore the poor world
with your self-doubt.”
I had no retort— no more
to state, having indeed
done as the sun said
not to do too often,

written bad poems
riddled with ennui
that I had no right
to have pretended to feel;
I wrote them because
that’s what I thought

a poet did—that’s
what I was taught.
“Hogwash,” said the sun,
reading my thoughts.
“Of course I read your
thoughts—a good bit better

than your poems.
Anyway, if that’s what
they taught you,
then you’d best forget
all you learned
in graduate school.”

“How can I? The bill
comes each month.”
“Well,” said the sun,
having the last word
as he always will
“looks like you’re the fool.”

Vincent Francone is a writer living in Chicago whose work has appeared in Spectrum, Rhino, New City, The Oklahoma Review and other journals. He won 1st prize in the 2009 Illinois Emerging Writers Competition and is polishing a book for publication. Read his blog at www.zombiedante.blogspot.com and look at his collection of smug writer poses at www.faceandhands.blogspot.com

Thanks to Vincent for his contribution to the tattooed Poets Project on Tattoosday!


This entry is ©2015 Tattoosday. The poem and tattoos are reprinted with the poet's permission.


If you are reading this on another web site other than Tattoosday, without attribution, please note that it has been copied without the author's permission and is in violation of copyright laws. Please feel free to visit http://tattoosday.blogspot.com and read our original content. Please let me know if you saw this elsewhere so I contact the webmaster of the offending site and advise them of this violation in their Terms of Use Agreement.
Posted by Tattoosday at 12:02 AM