Our next poet is Kristin Ann Fahlbusch, who sent us this glimpse of a tattoo on her ribs: 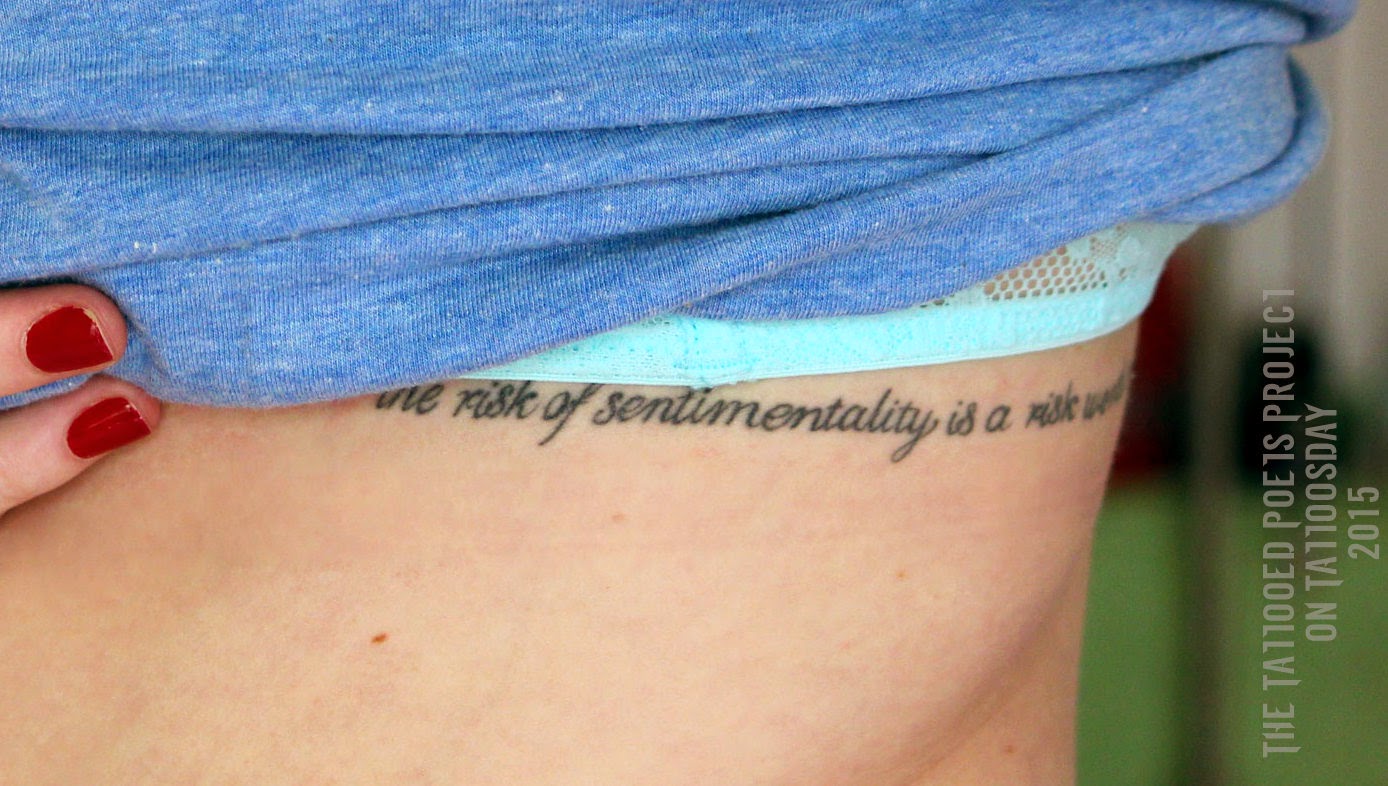 The tattoo reads: "The risk of sentimentality is a risk worth taking."


"I lost my older brother, Brendan, in a freak bicycle accident when I was just a little girl. Many years later, I came to NYC to The New School to try to further process Brendan's death through my poetry. But once I actually got there, I felt very 'blocked' creatively and struggled to create the collection of poems that I had dreamed of writing most of my young life.

The first serious poem I ever wrote about my brother, 'Something I Never Told You', I edited with the help of my professor, the incomparable poet, Paul Violi. Paul's only comment on my poem was, 'The risk of sentimentality is a risk worth taking.' After meeting with him after our poetry workshop one night, Paul told me that this poem would surely be my gateway to my first collection of poems--and he was right! My first collection of poems is still on its way to fruition but I never would have had the courage to explore my feelings surrounding Brendan's death and create this collection without Paul's constant support and encouragement.

When Paul passed away four years ago from cancer, I tattooed his wise words ('The risk of sentimentality is a risk worth taking') on my rib cage and promised myself never to give up on my goal of becoming a published poet because Paul never gave up on me."

Here is the poem Kristin Ann mentions above:

Something I Never Told You


This small scar
on the palm of my right hand,
near the heel.

I played with my Barbie dolls
in your Castle Greyskull.

I’ve grown up without you,
in the shadow of their expectations
for their first-born child,
I dressed your Alf in doll clothes.

I’ve tried to live my life
for the two of us,
making more mistakes
than the typical underdog;
Learned my lessons
from the sidelines
and old photographs.

Then there are moments
when childhood smells play their tricks on me—
and I catch your scent.
Like cold oatmeal at breakfast,
or the Sound in September,
or baby shampoo.

Kristin Ann Fahlbusch was born January 20, 1983 and grew up in Bayville, New York. She received a BA in English from The George Washington University in 2005, an MS in Adolescence Education with a Specialization in English from Long Island University in 2008 and is currently at work finalizing her thesis for the MFA in Poetry program at The New School. Kristin Ann's writing has been published by: Pirene's Fountain, TimeOutNewYork.com, The NY Post, West View News, THE SOURCE  magazine and Jones Magazine. Her photo work has appeared on: ModernBride.com and The Foundation for Photo/Art in Hospitals, as well as on Scallywagandvagabond.com. She lives and works in New York City.

Thanks to Kristin Ann for sharing her tattoo with us here on the Tattooed Poets Project!