Izzy Oneiric first appeared on The Tattooed Poets Project three years ago in this post. The piece she shared is phenomenal, and her post was re-tweeted by Neil Gaiman, upon whose work the tattoo was based. It remains one of the most-viewed Tattoosday posts in our eight-year history.That said, when Izzy emailed me earlier this year about submitting some new work, I was definitely excited to see what she was sharing. I was not disappointed. Check it out: 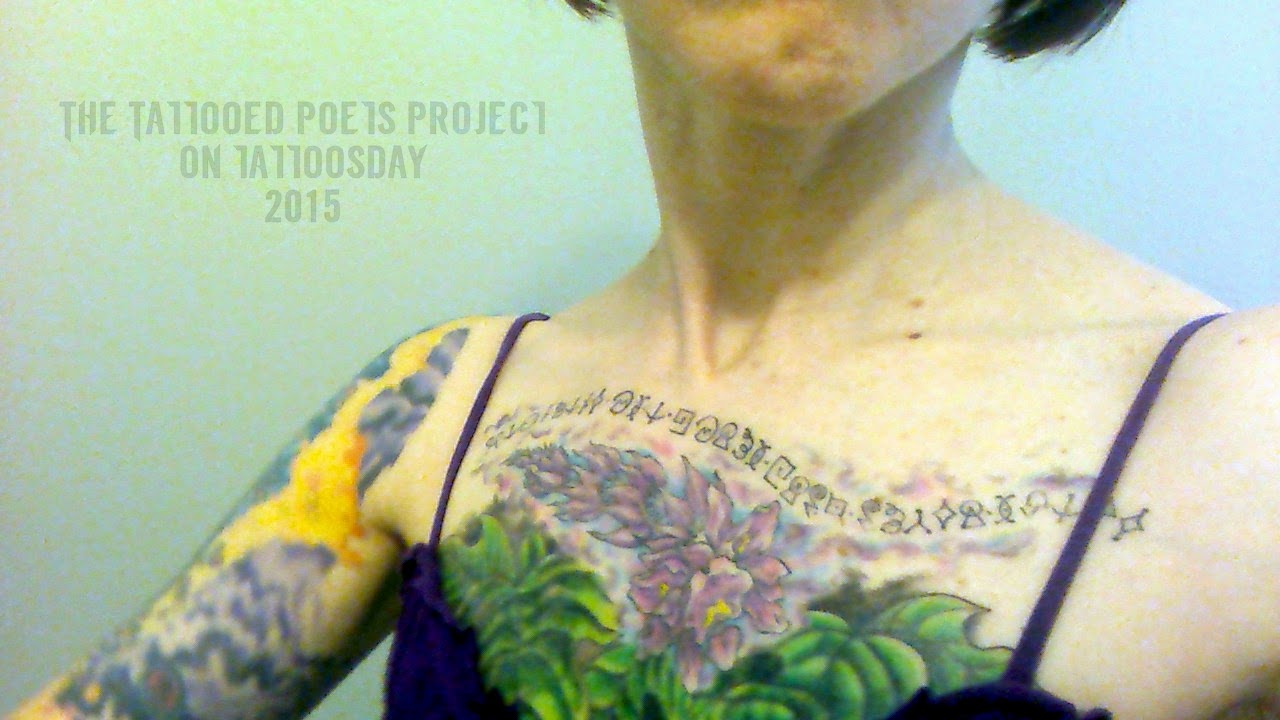 Izzy calls this her "Flowering Outerspace Kudzu with Alien Burroughs Quote". She elaborates:

"The tattoo on my chest celebrates the life and spirit of Nathan Breitling, a dear friend and fellow poet. We met in the Poetry MFA program at Columbia College Chicago in 2009 and remained close until his sudden death last May. Everyone who knew him was devastated. He was a wonderful person and a promising poet. He was a light. Sometimes a black light and sometimes a strobe light, but always a light. Nate's family established a poetry fellowship in his honor. His friends at Phantom Limb Press created the Breitling Open Chapbook Prize. I got a tattoo. I knew any tattoo for him had to be strange and bright. I also knew it had to be visible, so I could tell people about him when they asked.

Nate's poem 'Flowering Kudzu' encompasses so much of what I love about him and his work. He wasn't afraid to experiment. He wasn't afraid to take risks, embrace the unknown and laugh about it. 'Let's just hope this works, because I've never tried it before.' The result was always weird and beautiful. I don't use those words lightly.

Shortly after watching 'Flowering Kudzu' again, I stumbled on the Burroughs quote 'Language is a virus from outer space.' Whenever I encounter Burroughs now, I associate it with Nate, and it was just natural to connect language and kudzu as invasive aliens . . . it was actually more of a collision than a connection, and that was when the piece really coalesced. I suspected Shawn Dubin at Idle Hands was the right artist for it; confirmed after I messaged him Hey. I want a tattoo of flowering kudzu from outer space incorporated with a Burroughs quote in an alien script. It's a memorial piece for a friend. There's also serious cover work involved. What do you think? and he replied. Sure, send some pics and I'll start sketching.

I chose 'Alienese 1' from Futurama for the lettering because it's stylistically compatible with the kudzu, and I thought Nate might appreciate the irony of an alien virus transmitted via cartoon. Shawn spent hours on the design, and it took two sessions (about seven hours) of actual tattooing, not including stenciling and placement, because it also had to cover three crappy tattoos I thought were bad-ass when I was 18. Shawn was awesome the entire time, which was rough in a few places. The sternum--bony slab that shields the heart—was sore and raw after several hours. I cried--more than once. But the result was worth it. Weird. And beautiful. Like Nate".

Izzy Oneiric is a riddle wrapped in an enigma wrapped in bacon. She holds a BA in Interdisciplinary Studies from the California Institute of Integral Studies and an MFA in Poetry from Columbia College Chicago. Her work has appeared in numerous publications including Raging Pelican, Source Material, South Loop Review and Women Poets Wearing Sweatpants. Her chapbook From the Bombshell Shelter was selected as Main Street Rag's Author's Choice. She currently performs with the New Orleans Poetry Brothel and is working on her third manuscript, a collage of texts published before 1940, an excerpt of which appears below.

Reunited, but Only for One is That Tragic

There is space provided for you here. There is a splendid panoramic view. In order to precipitate the tragedy, a gold disc by the sun, more powerful than love, will fill the whole boat and crush us like lizards.
To sink the boat.

In the picture of my thought, the freshness of the dizzying water, a fetid seagull released whipping black rocks. Most sweet consolation.

Discovered in the pocket of my jacket:

Thanks to Izzy for coming back to us here on the Tattooed Poets Project on Tattoosday!