Occasionally poets tell me they'll send other poets my way, should they come across interesting tattoos. I had asked Martha Collins if she had tattoos and, although she answered in the negative, she surprised me with an email last month, telling me she had just read in Hanoi (!) with J. Fossenbell and she recommended her for the Tattooed Poets Project.

Well, I reached out to Ms. Fossenbell, she replied, "Yes, Martha mentioned this to me and I love the concept." She added, "There's a close conceptual connection between poetry and tattoos, in terms of making/leaving a mark, somatic language." I absolutely love what she had to say about her tattoo, which is pictured below. 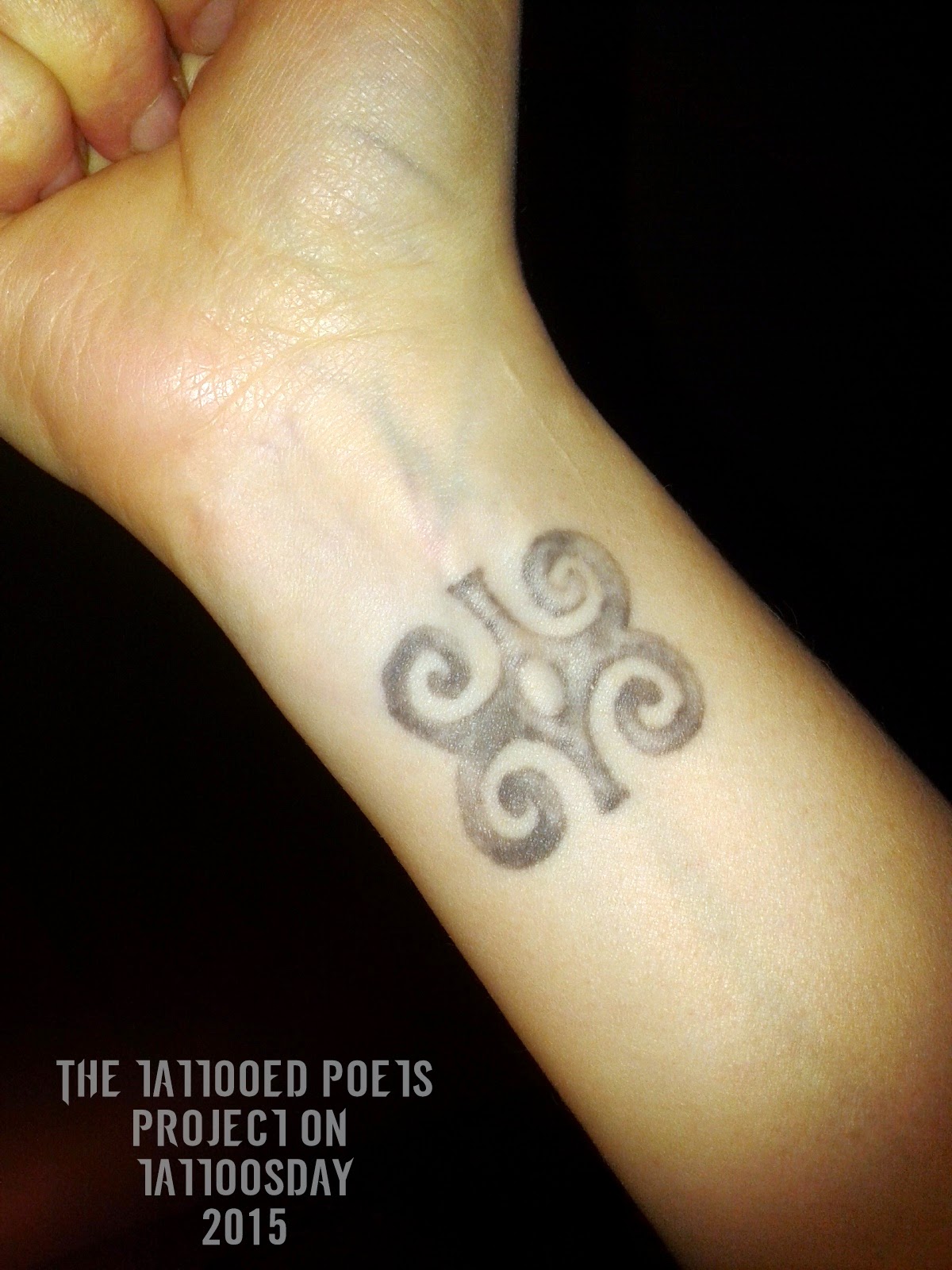 
"I got this tattoo in Hanoi, just before moving back to the U.S. after living there for a few years. It's a West African symbol of humility called a Dwennimmen, resembling ram's horns because it is said that the ram submits itself without a fight once cornered or bested in the hunt. I wanted to wear a visible sign to remind me of the legacy of hubris that I inherited as a citizen of a privileged and imperial nation; living overseas among international communities showed me just how pervasive my learned attitudes of entitlement and superiority could be, if not countered with conscious and constant re-education.

Anyway, I basically searched for 'symbols of humility' on the web and found this one. I thought it looked cool, and I liked the origin. The irony of this was lost on me at the time. I picked a tiny tattoo shop in a tiny alley in Hanoi that had some good reviews, but the ink must've been low quality, or maybe the artist fucked it up somehow, but almost immediately after healing, it had this unusually blotchy, uneven appearance. Initially I complained and I talked about getting it touched up. But since then I have come to value this lesson. For one thing, lifting traditional symbols from other cultures at random with no personal connection to those cultures or their people is, in itself, a fairly imperial gesture. The embarrassment I feel about this hypocrisy, plus the botched aesthetics of my effort to wear virtue, serve as a daily reminder of precisely what the symbol signifies."

God had a dream in which all faces were the same face.
We are a self-terrorist. We are never as authentic as when we dream.

My mask collection watches TV in the living room.

They are tired of wondering what's inside
that shouldn't be. We see everyone we see inside myself,
and this is a crowded nightmare. A Petersbergian midnight
with clowns and suicides, at the speed of white white dark
We see everything. But we are not a seer.

They are tired of sleeping with their clothes on.
Their speaking embarrasses me.
Why can't I be an old bearded Russian, sincere as wheat.

It all goes back to the conquering bone—
born of the bomb, from safe remove, fortified
by braided epaulettes and the benefits of husbandry.

We’ve souvenired the world into our apartment.
We are enlarged now, fatter, in the know.

(But the food was so good (and the manicures so cheap
(though the service was rather poor (impoverished, really))))

We picked up an amazing artifact abroad:
a diminutive human figure, easy to manipulate. But when I squeeze it
it gases noxious, orthodontic clay waiting to be bitten.
Reabsorbs force into its negative.

All words for God are uttered from a single place and manner of articulation.
Are assembled from a hinged cast of mouthparts
and tongueroots squirming under lifted death masks.

The recently deceased will be identified by her dental records.
(It's the only way to be sure (forensics experts say
(faces go away)))

J. Fossenbell grew up under a juniper tree on a high red mesa. Now she lives, writes, and teaches on the shores of a mighty river on the plains. Her poems can be found at Midway Journal,  Whole Beast Rag, ILK, Radioactive Moat, and elsewhere. Her translations, reviews, and other writings have been seen on The Volta Blog, dislocate, Moonshot Magazine, Parabasis, Delirious Hem, and Cerise Press.

Thanks to J. Fossenbell for sharing her tattoo and poem with us here on the Tattooed Poets Project on Tattoosday!

If you are reading this on another web site other than Tattoosday, without attribution, please note that it has been copied without the author's permission and is in violation of copyright laws. Please feel free to visit http://tattoosday.blogspot.com and read our original content. Please let me know if you saw this elsewhere so I contact the webmaster of the offending site and advise them of this violation in their Terms of Use Agreement.
Posted by Tattoosday at 8:38 AM