Today's tattooed poet is Adam "Bucho" Rodenberger. He sent in this sweet tattoo that is ideal for a crafter of words: 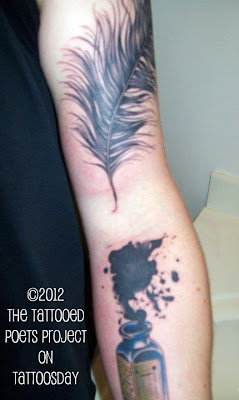 
"It had been 12 years since I'd last gotten a tattoo and, having moved to San Francisco in 2009 to pursue my MFA in Writing, I felt it was time for another mile-marker. I had been writing off and on since 1995, but got much more serious about the craft around 2003. By the time the summer of 2010 rolled around, I had completed one novel, half-completed two others for my program, and had a slew of publishing credits for some of my flash fiction and my poetry. I wanted something big, something grand and awe-inspiring, something that would keep me motivated to continue writing even when stuck in the worst of ruts.

I always wait a year before getting any new ink done purely to make sure I want it. Once this grace period was over, I searched out artists in the bay area and found Gordon Combs at Seventh Son Tattoo. His art was both lifelike and cartoonish at the same time but without sacrificing any seriousness and I knew that he was the one I wanted. Thankfully, after months of trying to get an appointment settled, I went in for a six-hour session and had the whole piece done in a day. What I like most about the piece is that, when my arm is bent, the feather appears to be dipped into the spilled bottle of ink on the forearm. The effect is quite nice and I've received a lot of compliments on it, even though my artist is the guy who deserves the praise."

The following was submitted by Bucho for Tattoosday:


Bless me, pages,
for I have not penned
and it has been several months
since my last confession.
I lack the paper
to summarize concisely
as the pen-born word
must be writ precisely.
If this ink runs,
my hand is unsteady.
My apologies,
I have put faith in armadas
to bring Helen home
while prayer-lighting
straw gods up in slow effigies
and my hands have
benedictioned themselves until weary.

Bless me, pages,
for I have now penned
and it had been several months
since my last confession.
I prayed at your altar
and recited your hymns,
crafted cursive letters
birthed by Seraphim.
I spun tales towards the heavens
and made deals with below
while awaiting armadas
with Helen in tow.


~~~
Adam “Bucho” Rodenberger is a 33 year old writer from Kansas City living in San Francisco. He has been writing off and on since 1995, but consistently since 2004. He holds dual Bachelor’s degrees in Philosophy & Creative Writing and completed his MFA in Writing at the University of San Francisco in 2011.

He began as a poet, but soon moved to flash fiction and short stories, only turning to longer works of fiction once he arrived in San Francisco. He is currently working on five experimental novels in the magical realism and surrealism genres.

Among his publication credits are Red Pulp Underground, Alors, Et Tois, Gloom Cupboard (#15), Up The Staircase #1, and Santa Clara Review.

You can visit Bucho at Fists & Angles, Christs & Angels here.

Thanks to Bucho for his participation in the Tattooed Poets Project on Tattoosday!


If you are reading this on another web site other than Tattoosday, without attribution, please note that it has been copied without the author's permission and is in violation of copyright laws. Please feel free to visit http://tattoosday.blogspot.com and read our original content. Please let me know if you saw this elsewhere so I contact the webmaster of the offending site and advise them of this violation in their Terms of Use Agreement.
Posted by Tattoosday at 2:25 AM