Today's chapter of the Tattooed Poet's Project features the work of Chris Siteman.

Chris sent in this poem featuring these literature-based tattoos : 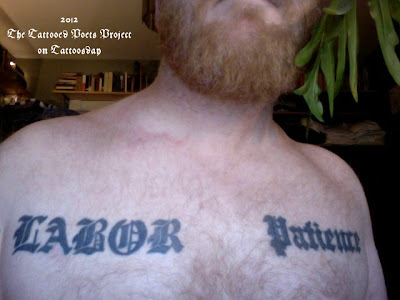 
"The pieces on my chest were my first two tattoos. I got them when I was twenty, and was working as a doorman at The Rathskeller, Boston’s now defunct rock bar better known as The Rat. The pieces were originally inked by Jason Sexton (Patience) and another tattoo artist (LABOR) whose name I do not recall, but who was then best known around the scene for the fact that he taught himself to tattoo by inking his own arm in a rendering of robotics from shoulder to fingertips. The work on the tattoos was performed before the legalization of tattooing in Massachusetts, and so the work on the word 'LABOR' was performed across the street from Fenway Park in an acquaintance’s apartment, and the work on the word 'Patience' was performed in the apartment I then rented with another doorman and a bartender who both also worked at The Rat.

The tattoo was inspired by something my older brother, William O’Keefe (the painter better known as W.O’K.), said to me often throughout my upbringing. He would repeat the phrase, 'learn to labor and to wait' at various moments during my childhood when I experienced some kind of setback or difficulty. As I entered my early teens it came to my knowledge that the line was from the last stanza of a poem, titled 'A Psalm of Life, or What the Heart of the Young Man Said to the Psalmist,' by Henry Wadsworth Longfellow. As I came to find out, our cousin (Richard Chetwynd, also a professor and a writer of poems) shared the poem with my brother years before. Some time in the year or so before the choice to get the words inked on my chest, a period of my life that seemed to be particularly lacking in answers of any kind, I came to the realization my brother had been whispering the 'answer' in my ear since I was very young."

Let us, then, be up and doing,
With a heart for any fate;
Still achieving, still pursuing,
Learn to labor and to wait.
~H.W. Longfellow (1838)

Chris offers us the following poem, "The Father of All Lies," which was originally published in Consequence Magazine Vol. II, and then subsequently published in Ditch Poetry in September of 2011:

The Father of All Lies

My father ghosts onto the trail, moon-lit sand—

Darkness the distance he hears them yell,
but he glides, burns in moon fire, & her old woman eyes open wide, shrink at the same time;
her tracheal cartilage fractures the air.

After he drinks so he cannot feel her last breath against his cheek, his grip
on her boney neck, can’t hear her gurgle.

Taut as strings on a lyre, he sees our mother’s silhouette in green
alarmclock light. Arm’s distance, she gasps—

She walks where the moon woman died. He’s a young man, her throat under his hand.

I remember a black trunk at the foot of my parents’ bed, five stacks of letters tied with red
string, black & white photographs scattered in the removable drawer
where a short sword, flat across the toes of his boots, shone.

How the glint of steel caught my eye—

Running a finger along the edge, I sensed that blade deep in my marrow.
I heard steps on the stairs, but burned with the image of a young man standing like a cross,
smiling, head dangling from each hair-clenched fist—

A seven-year-old I saw a hero in my father, though I didn’t know his name, & my father bound
his life to lies, a story-line, ideas how that hero’s name should sound—

Home, a mother who didn’t send him to a workfarm at eight, a life where he escaped sentencing,
where he never hung on the corner of Somerville Ave. in Winter Hill, never—

At dances, my father kissed girls in plaid skirts until the Holy Ghost gave way to canned beer
fistfights with public school boys from Cambridge.

His father lay dying as they held hands in a disinfected hospital room.

He played guard for his high school’s basketball team, before that book binder’s job
to support his mother, before friends died for God & Country,

rather than having skulls caved in with a sixty-five pound barbell in the yard mid-day
over smokes, a fuck, skin color, a look—


5.
elegy for a fallen comrade

He died there, same as we all did. His dying just showed more, killed him faster.
Sure as I speak now, saying this: in a field of fear & steel, fists clenched in mud,
writhing through stench, through mortar-churned graves, more bullets than bees
in spring, poppies everywhere, larks sang for sunset—

His body lies under grass, while brambles of razor-wire, forgotten toe poppers & I persist,
unholy love poems to those who died for reasons of which they spoke
no knowledge.

A cold lung of air strikes me how close one never gets to a man whose shadow stands that tall;
there’s a black & white photograph from which my father grimaces.

When I was a child at the kitchen table we laughed together over funnies,
his steel bones softened & he turned his face away from his stone face—
Sometimes I see his crook-tooth smile, still hear him laugh,

but then a memory— Him breaking
a boy’s knee with a bat in front of our house; the boy crawls, blubbers; father whispers
before each blow: Time to pay the piper, kid. Time to pay.

My father told lies to soften his stare, to frighten me less & help me remember—
A black trunk of war memorabilia & other lies I wanted to be true.

He never told the shape of his loneliness:

Hatcheting heads from geese under January’s granite skies, hanging their little corpses on hooks
to bleed out, tenderness named the ache in the old farmer’s bones on the bitterest of days,

and the streets of Winter Hill before he killed.

Born in Boston, Chris Siteman grew up in a blue collar, predominantly Irish-Catholic, family. He’s traveled widely in the US and Europe, and worked extensively in the trades. In 2007 Chris received his MFA from Emerson College. Since August of 2010 he’s been pursuing his JD at Suffolk Law. He has taught in Boston University’s undergraduate writing program, Lesley University’s Humanities Department, and currently teaches in Suffolk University’s English Department. While the poem here was originally published in Consequence Magazine Vol. II, and subsequently in Ditch Poetry in September of 2011, his work has otherwise most recently appeared in Anomalous, The Fiddleback, Borderline and Poetry Quarterly.

Thanks to Chris for his contribution to the Tattooed Poets Project on Tattoosday!


If you are reading this on another web site other than Tattoosday, without attribution, please note that it has been copied without the author's permission and is in violation of copyright laws. Please feel free to visit http://tattoosday.blogspot.com and read our original content. Please let me know if you saw this elsewhere so I contact the webmaster of the offending site and advise them of this violation in their Terms of Use Agreement.
Posted by Tattoosday at 2:56 AM

Great job, Chris! Wonderful words and thoughts and prose...anything that forces and/or allows introspection and thought, replete with imagery and background, is a worthy read! Cheers to you!