Our next tattooed poet is Gary McDowell. Here's what Gary had to say about his ink:


"I remember thinking as a teenager that I’d never get a tattoo. It wasn’t because I didn’t like them. I did. It wasn’t because I was afraid of the pain. I wasn’t. I think it had something to do with the fact that I had no idea what I would ever want permanently etched into my skin. But as I grew older and my obsessions and faiths and vocations started to align, I reconsidered, and now I don’t ever want to stop.

Both of my tattoos come from an artist, Blaine, at Baby Blues Tattoos in Bradenton, FL. My wife’s family has a condo on Anna Maria Island, FL, and so we visit every summer. In the summer of 2006 I got my first tattoo (the kanji for “poet/poetry” on my right wrist). 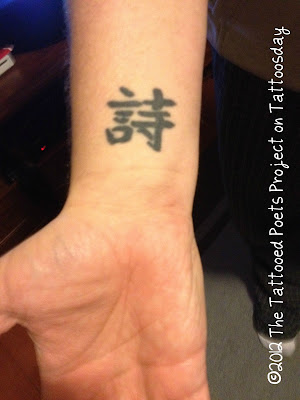 The impetus for it was simple: I’m right-handed and a poet, and so the thought of having poetry on my wrist appealed greatly to me.

Blaine did such a good job that in the summer of 2008, I went back and got my left calf worked on. 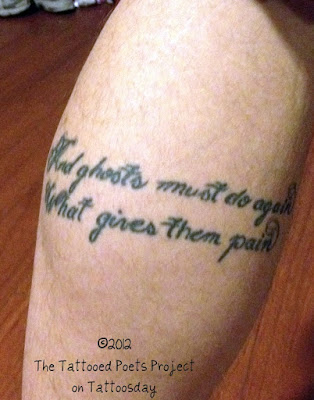 At the time, my wife was pregnant with our first son, and we planned to name him Auden; though his name was not totally derived from the poet W.H. Auden—my wife found the name in a baby book and dug it before she even knew it was a famous poet’s surname—I wanted to do something to commemorate my Auden’s impending arrival, and so I decided on two of my favorite lines from Auden’s 'The Question': 'And ghosts must do again / What gives them pain.' It’s a gorgeous reminder that we must conquer our fears, take a stance against what haunts us."

Gary sent us the following poem which, in his words, "exemplifies my work best":


THIS SUMMER WITH FISCHL

I must repent for this summer I’ve spent beyond creatures,

for the mysteries I’ve seen in a world

that thinks there are none, a world where we’ve named things—

garage, fence, robin, poem—so that we can feel

something when we destroy them.

I must repent for the chlorophyll in the leaves,

the time I’ve spent in the pool, no raft,

just my convexed back keeping me afloat,

for the hours wasted hoping the clouds above me

and weighted, so that I could be touched by something

other than a man begging for change outside the library.

I must repent for the sunflower, its aching, arcing

reach for light, for staring at the woman next-door,

in the can with a snow shovel, add a full bag from the kitchen,

return the lid to the can, and weight it with a ham-tin filled

with pennies. I too wouldn’t have believed it.

Every time I turn my head to look out the window,

I see a harsh light through the blinds, striping everyone with shadows,

I see Bad Boy: a teenaged boy, a purse full of money,

a nude woman (his mother?) on her bed, her leg bent, arched

toward her mouth—is she hungry, dreaming, bored?

splayed across the woman that make her an animal, but I’m glad

she’s uncaged. What it must feel like to be stitched together,

thefted-after like a bowl of apples and bananas in a Freudian dream?

In another painting, a woman crawls naked through a backyard,

huddles against a row of hedges. While I haven’t seen that,

I must repent for the squirrel that fell from the tree,

for my dog who wouldn’t let go of its neck.

The hours I spent looking at beach scenes: I repent.

The incest, the drinking, the affairs, the nudity: I repent.

The thinking beyond line, beyond shape: I repent.

for dinner, a nude sunbather on her belly, her back damp,

her boombox sweating Shakira, Marc Anthony, and then silence.

The eavesdropping, the baseball on the radio, sweet peas and carrots.

For the old man across the street, his bad hips, his garbage can

that I move to the curb, his cane, too short for his arms: I repent.

In many of the paintings, I imagine a dialogue between

two quarreling lovers—or is it a monologue, a palette of yellows and reds

through the kitchen window each morning, their cups of coffee

barely settled on the counter before they begin. I must repent

for the unneighborly innuendos, the pile of dog shit

on the driveway that someone will surely step in, unaware that they have

until later, much later. I must repent for repenting, for repeating

myself, but this summer of recycling bins and large paper bags full

of lawn clippings has named me differently, and Fischl, his naked

eyes, have given me a hard-on for all things domestic:

gossiping, love-making, dog-walking, putting myself ahead

of myself only to find myself lost in myself, lost because

nothing is what it seems here. I must repent for spending so much

time with the mysteries of texture, with a book that weighs more

as if their lives were canvassed, colored, hung on my eyelids.

The streets, the beaches, the neighbors: all starkly lit scenes,

a robust sense of everything having been played and replayed,

rehearsed like Sleepwalker, that skinny boy in the porch light, cock in hand.

The lawn chairs empty, and we watch him like we want to help him,

like we can touch him ourselves and make him stop, but he won’t stop,

not until the lights go out or the sun rises or we fall asleep watching.

I must repent for not watching more closely the bagpipe-lined

streets, for the way the doves peck at the window when they’re angry

or confused or cold or hungry. Perhaps I haven’t been

I thought, before I started here, are merely lost in the lines,

the colors, the textures of a painting I have yet to encounter.

(Dream Horse Press, 2010), won the 2009 Orphic Prize for Poetry. He's also the author of two chapbooks, They Speak of Fruit (Cooper Dillon, 2009) and The Blueprint (Pudding House, 2005), and he's the co-editor of The Rose Metal Press Field Guide to Prose Poetry: Contemporary Poets in Discussion and Practice (Rose Metal Press, 2010). His poems have appeared in dozens of literary journals, including The Bellingham Review, Colorado Review, The Indiana Review, The Laurel Review, New England Review, Ninth Letter, and Quarterly West. He lives in Nashville, TN where he is an Assistant Professor of Creative Writing at Belmont University.

Thanks to Gary for his contribution to this year's Tattooed Poets Project on Tattoosday!


This entry is ©2012 Tattoosday. The poem and tattoo are reprinted with the poet's permission.