Our next tattooed poet is Danielle Shutt., who sent us two photos.

First is a shot from right after she got inked in June 2007: 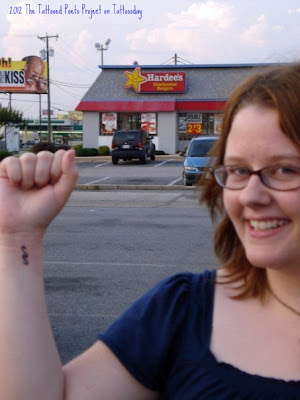 And then, a close-up of the tattoo: 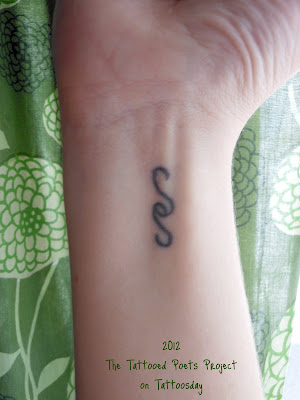 
"My wrist tattoo came out of my own mindless notebook scribblings. It's two intertwined S's, representing my younger siblings' first names. We've been through a lot together. I got the tattoo when I was 23 and living in Richmond, VA. There was a particularly strong surge of family-related peril and tumult back then, and I found myself wanting something that would keep my brother and sister close to me--something less morbid than the black cloth bracelet I'd been wearing. I knew the drawing was exactly 'right,' but it took me a while to commit anyway. I'm the kind of person who needs to be bitten by impulse before I get my body involved in anything. (This includes dancing and doctor appointments.)

In this case, a grande margarita and my friend Kristen did the trick. Kristen accompanied me to River City Tattoo, where a nice guy named Reverend Bob tattooed the symbol on my wrist in less than three minutes. I was happy with it. I always will be.

I get asked all the time about what the tattoo means, which is cool because I love talking about my sibs. I still think of the tattoo as a comfort, but more often these days it reminds me of my brother and sister's hard-fought survival, which in turn reminds me to stay strong, too."

Danielle shares this poem, as well, which originally appeared in thINK, a letterpress book published by Bowe Street Press at Virginia Commonwealth University:

Sometimes I Have to Go Around Will’s Curb

Barbed wire reached to scratch a warning at his window;
or, the slaughter-cows flicked their tails like traffic guards,
and in dusk a roadside tree flashed him old scars
to beg off new bruises.

But really, there's nothing looking dead there. No car parts
or patches of uprooted grass, none of his teeth half-ground
into the pavement. The wooden stretch of new fence
isn't as stark as I'd expected.

I guess he kept all the mess of it with him, smashed under
his face, caulked behind his eyelids; or, it's in the red dirt
and bone dust sent up by the tractor hitched to his lungs,
pulling slow on these back roads.

Danielle Shutt completed her MFA in Creative Writing at Eastern Washington University in Spokane, WA, where she taught writing courses and served as a poetry editor for Willow Springs. Her poems have appeared or are forthcoming in Hayden's Ferry Review, Redactions: Poetry & Poetics, PANK, Copper Nickel, DIAGRAM, and Hotel Amerika.

Thanks to Danielle for sharing her tattoo and poem with us here on Tattoosday!


If you are reading this on another web site other than Tattoosday, without attribution, please note that it has been copied without the author's permission and is in violation of copyright laws. Please feel free to visit http://tattoosday.blogspot.com and read our original content. Please let me know if you saw this elsewhere so I contact the webmaster of the offending site and advise them of this violation in their Terms of Use Agreement.
Posted by Tattoosday at 2:59 PM